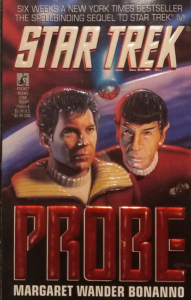 This week, it’s clear the Romulans have been to the movies lately. Suddenly they’re planning their own peace initiative, with blackjack, and hookers. While they and the Federation put together dinner and a show, the probe from The Voyage Home drives through space with a trunk full of unanswered questions. And when it makes a U-turn to get the truth, Kirk and Spock realize it’s going to take a lot more than showing it a couple of whales to satisfy its curiosity this time. Which Romulans are serious about peace and which ones aren’t? What does the probe have to look forward to when it goes home? Is this yet another flippin’ “Enterprise Incident” sequel? All this and more in Probe, the I Can’t Believe It’s Not Butter! of Star Trek novels.

The Romulan Empire makes an announcement that sends shock waves throughout the galaxy:

But wait, there’s more! With the mean ‘n’ nasty Praetor out of the picture, the interim government shows interest in making overtures toward peace between the Empire and the Federation. Nearly everyone is skeptical to some degree, but an olive branch is an olive branch and the stardate isn’t April 1, so they decide what the hey.

The Romulans place a boatload of stringent conditions on the proceedings. Not ready to contend directly with Vulcans and hoping to keep an ace in the hole in case talks break down, they refuse to meet with Sarek, leaving his second banana Kevin Riley to lead the diplomatic charge. They also propose a co-op archaeological dig on a neutral planet of major symbolic importance, and even go as far as to call the shots on who will lead the dig.1Audrea Benar, a character we’ll talk about more when we get to Music of the Spheres, the original unpublished version of this book. Musical performances are also planned, led on the human end by bloviating egotist Andy Penalt and on the Romulan side by Jandra, wife of a mediocre yet suspiciously hastily promoted subcenturion, newly returned to good standing in society thanks to her reinstatement in Orthodoxy (never defined, but clear enough).

While the Federation walks on eggshells to keep the dream alive, the massive object that nearly destroyed Earth in Star Trek IV: The Voyage Home trudges through space gnawing on a dilly of a pickle. Almost two movies later, it continues to grapple with a question it can’t answer: “How no whales, but then whales?” Unable to reach a logical conclusion—or, evidently, to arrive at a hypothesis of time travel with its enormous crystalline alien CPU—it makes a three-point turn while obliviously meandering through Romulan space.

For a book called Probe, it sure tries its hardest for as long as possible to not be about the probe. For most of the first half of the book, the titular machine stays out on the fringes of the action, talking to itself, trying with its incomplete memory to solve mysteries like how whales suddenly appeared out of nowhere on Earth and how “the mites” (as it calls humanoids) are able to speak its language, the True Language. This continues until basically it looms too large over everything else to be able to ignore. A lot of time that could have spent getting into some ultra-weird nitty-gritty is wasted in favor of political and diplomatic friction that is not bad exactly, but certainly decidedly less exciting.

The arrival of a story involving a Romulan peace initiative so close on the heels of a movie entailing the exact same thing except with Klingons is a little unfortunate, though Probe likely would have beaten The Undiscovered Country to the punch if not for all the behind-the-scenes upheaval. Both were even inspired by the same event, i.e., Mikhail Gorbachev’s twin policies of perestroika and glasnost, which they both contain explicit references to. The parallel makes more sense when applied to the Klingons, since The Undiscovered Country provided a helpful bridge between the eras of conflict and peace with the Klingon Empire. Still, it’s fun to see the Romulans make the attempt as well, even as you know deep down there’s no chance of it ever panning out.

Probe is one of the most controversy-laden Star Trek novels in the history of the franchise’s association with Pocket Books. Indulge me as I back up for a second to fill in some gaps. In the 1980s, Margaret Wander Bonanno wrote two very excellent Star Trek novels, Dwellers in the Crucible and Strangers from the Sky. There are only six-and-a-half years spanning the gap between Probe and Dwellers (and not even five between it and Strangers). In calendar terms, that sounds like a drop in the pond. But when you’re talking about the evolution of Star Trek novels, 1987 and 1992 might as well be night and day.

Bonanno’s first draft of Probe, entitled Music of the Spheres, included two characters named Cleante alFaisal and T’Shael. The two women were the protagonists of Dwellers in the Crucible, making Probe a sequel in ways that aren’t necessarily related to The Voyage Home. However, the approach that Star Trek authors and editors embraced when Dwellers and Strangers were written was radically different from the way things were by the time Probe came into being. In the mid-80s, Trek writers often focused their stories heavily—sometimes entirely—on their own original character creations. Books like Dwellers in the Crucible, The Final Reflection, Pawns and Symbols, and the Fortunes of War duology2Dreadnought! and Battlestations!, both by Diane Carey. may have taken inspiration from the past adventures of the Enterprise, but they didn’t rely on it to move the mythos forward.

That changed in 1987, when the impending arrival of Star Trek: The Next Generation, not to mention the fallout from some more (ahem) liberal interpretations of the canon, renewed Gene Roddenberry’s interest in overseeing how writers were handling his creations. Probe, written under the old philosophy, did not pass his and his notorious assistant Richard Arnold’s new sniff test. So, despite having dust jackets with Bonanno’s name on them already printed, they handed the story over to Gene DeWeese and paid him a flat ten grand with no royalties to make it suitable for publication.

The book itself alludes to only the slightest trace of this controversy with a short message printed at the front of the book: “The publisher wishes to thank Gene DeWeese who made significant creative and conceptual contributions to this book.” This, of course, is an oblique way of saying he rewrote practically the entire thing from the ground up. Bonanno claims that only 7 percent of Music of the Spheres survived intact in Probe. Specifically, she cites the scene where Jandra plays the Praetor’s funeral for three days straight as the only passage that made it unmolested into the final product. That isn’t totally true—e.g., Sarek sizing up Kevin Riley and talking about beards shows up in more or less identical form in both stories—but it’s close enough to withstand non-nitpicking scrutiny.

Bonanno, for her part, seems to have a remarkably even-keeled outlook on the situation. In “Probed”, a three-page Word document downloadable from her website, she goes into detail about her feelings both at the time and since, and it’s worth a few minutes of your time if you’re at all interested in the fraught history of the book’s publication. In the one bit I interpreted as a dig, she calls Probe “a solid, readable novel”, which, coming from someone of her talent, is practically scorching with faint praise. DeWeese didn’t have much to say about the book that I found, other than to express a slight bit of regret that his name wasn’t the one on the cover. Voyages of Imagination strives more for impartiality, stating that “an objective report of Probe’s bumpy road to publication is, unfortunately, impossible.” While that may be true, it doesn’t necessarily mean that an objective report is a desirable thing to have. Bonanno’s own assessment of the whole thing is hardly unfair or malicious, though she very well could been, and she would have been well within propriety to do so.

Though the burn from the Probe mess stung for a while, Bonanno eventually returned to write a few more highly regarded Trek stories long after the Probe-era editorial regime was out of the picture, and she wishes there could have been room for both her own interpretation of the probe’s continued adventures and DeWeese’s. She even manages to find a silver lining: thanks to conventions inviting her to dish about her unsavory experience, she met the man she eventually married at one of them.

I admit there isn’t a lot of critical analysis in this review and that it’s mostly about the behind-the-scenes aspects of the book. That’s because there are a lot of aspects of Probe I suspect will make a little more sense to expound upon in the Music of the Spheres review once I’ve read through that and will have the complete picture in front of me. As it stands, Probe is fine, but nothing more. If I had my druthers, I’d probably have picked a less prosaic author than Gene DeWeese to rejigger anything written by anyone as deeply attuned to the emotional aspects of Star Trek as Margaret Wander Bonanno, but I was seven years old at the time, so no one asked me.

I give Probe 2.5 out of 5 Romulan peace conferences. In having to take a story by someone with a voice as distinctive as Bonanno’s and change nearly the entire thing, DeWeese was saddled with a frankly unenviable task. Bonanno’s claim that there is virtually nothing left of her voice in the final product is distressingly accurate, and that’s a real shame. If anything though, it’s a miracle that Probe isn’t outright bad despite such a thorough gutting. It does start taking off to interesting heights in its final third, but it’s too little, too late by then. Although it’s a strong case of “what could have been”, we’ll know exactly what could have been when we check out the unpublished original manuscript.

NEXT TIME: Same song, but different tune in Music of the Spheres

Music of the Spheres delayed