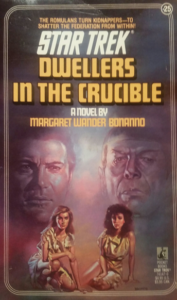 Remember when two daring authors named John M. Ford and Diane Duane created rich, dense histories and cultures for Klingons and Romulans from almost no raw materials whatsoever? Pepperidge Farm remembers. But so do some authors who came along later, like Margaret Wander Bonanno, who makes her debut here. Get ready for some of the Klingon-iest Klingons, Vulcan-iest Vulcans, and … well, there’s not much new or exciting going on with the Romulans, but they’re here, too.

Romulans! Are you sick of Romulans yet? Star Trek Pocket Books writers aren’t! This week, they infiltrate a Vulcan settlement and capture six delegates known as Warrantors of the Peace: a human, a Vulcan, three Deltans, and an Andorian. They do this in the hopes of fomenting civil war among Federation planets, but like most Romulan plots, it’s exceptionally poorly thought out, which is painfully obvious almost from the word “go”—even more so once they enlist Klingons to babysit their hostages.

The Warrantors of the Peace is an interesting if somewhat byzantine concept, adapted for modern times from an ancient Vulcan practice (and inspired, for Bonanno, by a real-life thing). Essentially, each participating planet puts up one person (or a few), typically someone extremely close to a high-ranking official, as a buffer against intergalactic war, and that person serves for the duration of their sponsor’s term of office. Each of the Warrantors has the launch codes for their planet’s respective doomsday weapons surgically implanted in their heart, and the leader of the planet must kill the Warrantor and extract the information by their own hand if they want to go to war. Vulcan has been pushing the same referendum for 150 years, and you know them. They aren’t going to attach a rider full of pork barrel projects just to get their bill to pass; they’re just going to keep introducing that same referendum until the Federation agrees to a test drive, which they finally have. As you can see, it seems to be going great!

So then the Enterprise crew will swoop in and save the captured Warrantors, right? Well, yeah … kind of. The thing is, this isn’t really their story. They appear in it, and things happen to them. Sulu spends months deep undercover (cosmetic surgery, fake identity, the whole megillah) in Romulan territory as a records clerk, which some might say could warrant a whole novel on its own—yet it barely moves the needle on Bonanno’s excite-o-meter. Saavik is basically only here to establish where this story falls in the timeline; I think she barely spits out two sentences the whole book. This story is not about the usual crew. It concerns itself primarily with two original characters: Cleante alFaisal and T’Shael, the human and Vulcan Warrantors, respectively.

The Warrantors are taken to an uninhabited planet between both neutral zones, and from an initial contingent of six, the Klingons left in charge of them slowly winnow them down to two. Theras, the Andorian, dies before they reach the planet and before the Klingons are even involved. The Romulans can at least pass that one off as self-defense since he initiated the attack, but there’s less excuse for how the Klingons treat the Deltans.

It’s been a hot minute since we’ve hung out with any Deltans—in fact, this is their first major portrayal since the Motion Picture novelization all the way back at Pocket Book numero uno. I’m beginning to notice that characterizations of races and characters that are rarely seen tend to be uniformly strong regardless of who writes them, which I would surmise is due to the fact that the paucity of canonical information about them leaves them open to wider interpretation and adds a veil of mystique that authors find alluring and which is easy to glean strong material from. Whatever the case, I really cared about the Deltan Warrantors, and they got me as close to misty-eyed as I’ve been since The Wounded Sky. I even liked the annoying female one, though the scene where she commits suicide by screaming her head off to essentially trigger a full-scale dump of negative pheromones is nothing short of horrifying.

A lot of the credit for that fright goes to how the Klingons are portrayed here. Krazz, even though that might be the worst Klingon name anyone’s come up with yet, has a lot of dimensions for a TOS Klingon. He fought hard to get from his backwoods roots to get where he is; his more aristocratic subordinates consider him an ignorant rube, which in a lot of ways he is, but he’s very conscious of their opinions, and that self-awareness is largely what’s helped him rise to the top of the heap. That chip on his shoulder and less civilized upbringing also make Krazz quite a bit nastier than your average Klingon. Krazz attempts to rape Cleante (but is thankfully foiled) and runs experiments on the Deltans that would be grossly inhumane even if performed on far less advanced beings. As time goes on, the “honor-bound warrior” portrayal of Klingons begins to supersede the more problematic “filthy savage” aspect, so when an author leans into the more barbaric conclusions one can jump to with the latter, it can be rather jarring.

Krazz’s ability to inspire terror makes it all the more dismaying when he dies instantly when the planet literally has an earthquake seemingly for the sole purpose of swallowing him, leaving his first officer Kalor, who is a different but no less potent flavor of terrible, manifesting his awfulness mainly by exposing T’Shael to the harsh elements and having a lot of sex with Cleante. (Cleante’s ease with sex is established early, and it’s absolutely tragic how she uses it to protect T’Shael and ends up Stockholming herself into loving Kalor.)

The Romulans fall a fair bit shorter, and it’s largely because this is the second book in a row to feature the nameless commander from “The Enterprise Incident”. She’s strong and she has sympathy for T’Shael and Cleante and tries her best to give them the amenities denied them by the Klingons, but it’s a tad annoying to see multiple consecutive books taking this character on. On one hand, I get it: only two of TOS’s 79 episodes featured Romulans, and the first one had Mark Lenard, which is tough to work with/build on since he’s now and forever Sarek, leaving literally one other episode. But Romulans threaten to get real stale real fast if authors insist on constantly returning to canon’s dry well. To me, it seems the best solution is to focus on original creations, Romulan or otherwise, but most authors can’t seem to resist going back to that one character.

Through it all, Cleante and T’Shael hang onto each other for dear life, each constantly fearing they have failed the other, only to come through with their t’hy’la bond intact and stronger than ever. Their journey to friendship is mostly told via flashbacks. They represent an almost 1:1 parallel of the Kirk/Spock dynamic, and in case that isn’t obvious throughout, the book makes it explicitly clear at the end. It’s well-trod territory for Trek, but it feels fresh when explored with new characters, especially women.

This is also a book that very much continues from the portrayals of Klingon and Romulan (Rihannsu) culture set forth by John M. Ford in The Final Reflection and Diane Duane in My Enemy, My Ally, so if you liked those books, you’re in for a treat. I enjoyed seeing Ford’s all-purpose Klingon F-word khest pop up a few times, and it’s still amazing to me that I find it amusing and not the stupidest thing in the galaxy. At the time they were published, The Final Reflection and My Enemy, My Ally may very well have seemed like anomalies: deep speculative dives into then-unexplored history written by a couple of wonks who happen to be a few orders of magnitude more sophisticated than your average Trek writer. But it’s vindicating, to fans of the novelverse and to those authors and their works, to see other authors take up their mantle, even as you realize it can’t last without eventually creating some serious clash as the shows continue to develop these cultures in their own way.

Overall, Dwellers in the Crucible is a highly compelling read, and it points to a direction that had the potential to be really fascinating had Pocket Books chosen to pursue it. If you like these sorts of stories that focus more on new original personalities rather than the old Enterprise faves, enjoy them while they last, because Pocket Books would eventually clamp down on that sort of thing—in fact, the policy they eventually institute of not devoting too much of a narrative to original characters will later hobble an event novel by this very author. But as usual, we don’t want to get too far ahead of ourselves.

Dwellers in the Crucible is one of the more radically different older Trek novels, and it really delivers. Bonanno’s writing is confident in itself and charged with emotion, and she really knows how to dial up the tension when a situation calls for it. The Enterprise characters are little more than props that mostly sit around and twiddle their thumbs, but they get plenty of time in the limelight. After all, the idea is to explore strange new worlds, and I think it’s more than fair to apply that to personal as well as planetary ones.

NEXT TIME: Pawns and Symbols