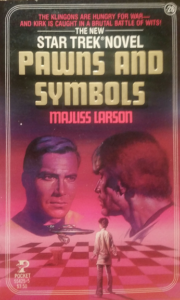 Another week, another novel focusing on a new and never-before-seen character. Jean Czerny, an agricultural scientist, is captured by Klingons and forcibly recruited to solve their famine crisis. It’s the job she was born and bread for, but she can’t afford to loaf around. Will she ac-wheat-esce to the Klingons’ demands or go against the grain? This week, it’s Pawns and Symbols, or, How I Learned to Stop Worrying and Love the Klingons.

Jean Czerny (pronounced “cheerny”), an agricultural scientist posted on Sherman’s Planet, survives an earthquake that destroys her station and kills the rest of her workmates. She isn’t hurt, but she has moderate amnesia. You might think that’s important, but she only fogs out a handful of times throughout the book, and when her memory is finally triggered, it’s really clumsy and dumb, so don’t worry about it too much. Klingon commander Kang, from the season 3 episode “Day of the Dove” (the one where a ball of light raises everyone’s aggression levels, makes them fight, and feeds off their prejudice and hatred), captures her and demands that she open the vault containing the high-protein-yield and disease-resistant strain of quadrotriticale she’s been working on. She’s slow to budge, but soon makes an easy conversation partner, if not a friend precisely, in Aernath, also an agricultural scientist.

Aernath sneaks Jean food while gently urging her to relent. He gets caught and Kang orders him killed with the agonizer, but Jean agrees to open the vault if Kang spares him. Having saved his life, she invokes the same life bond Kang invoked on her. Once she learns the true nature of the Klingons’ predicament (a famine), she says, “Well, why didn’t you just ask, ya big silly?” and sets to work with Aernath without nearly as much coercion and grandstanding, and although she still has to be careful around certain more antagonistic Klingons, she’s largely under Kang’s protection, especially once he makes her his consort. Kang thinks Jean’s got spunk, and the feeling’s mutual.

In retrospect, I feel a little bad about dunking on Killing Time as much as I did for being so outrageously horny, because Pawns and Symbols is itself no slouch in the horizontal samba department, and in fact, I’d argue it’s a good bit more lurid. I admit this is a pretty tortured analogy, but if Killing Time is that person you knew in high school (whom we all knew) who talked a big sex game and knew all the clinical terminology and never met a “that’s what she said” joke they didn’t like, then Pawns and Symbols is the person whispered about in the halls who has actually done all that stuff and more. Despite an instinctive urge to say I am, I’m not against sex in Star Trek, because it would pretty silly to argue there’s no place to explore the idea at all, but I do consider it largely beside the point in stories that aren’t primarily about a relationship of some kind, and while Kang and Jean do grow close to an extent, it’s not the foremost aspect of the story.

Anyway, Jean gets carted about from planet to planet within the Empire, working on the new strain of quadrotriticale as circumstances allow, having a lot of sex with Kang, and generally having an actually pretty decent time under the thumb of Klingon oppression—that is, when she isn’t witnessing the unimaginable horrors of poverty and famine, or getting captured by various factions and used as a pawn in the struggle between Kang, who thinks they need to avoid assistance from outside the Empire and is apparently next in line to the throne via his maternal uncle in an ascendancy plot I confess I didn’t care much about, and Mara, who left Kang and went underground after the events of “Day of the Dove” and is currently of the mind that maybe trying to get along with the Federation isn’t such a bad idea.

Like its immediate predecessor, Pawns and Symbols makes an original character its main focus, though it strives for (and achieves) more balance and connectivity between her arc and the Enterprise’s comings and goings than Dwellers in the Crucible did (or cared to). It also tries its hand at extra-canonical lore, though Larson entirely discards the Ford template and mostly just makes up a bunch of new stuff. Klingon characters in this book invoke two gods, Durgath and Cymele, with excessive enough frequency to make you wonder if maybe Evan Wilson was more even-handed with her invocations of Elath than you remember. Also, Klingon people and planets don’t appear to stick to any sort of terribly coherent naming convention, which wouldn’t be so glaring if that sort of thing hadn’t been just starting to come into focus in both canon and non-canon works around this time. As it is, they mostly just sound wrong to the ear.

I mentioned on Dwellers in the Crucible that characters we don’t see very often tend to always be on the receiving end of some pretty strong character development because it’s easy to create compelling plot threads for characters that aren’t around that often, and Kang is no exception. Any time Kang was around and talking, I was riveted. He also gets put through the emotional wringer a bit, especially regarding a late-story development that I won’t dare to spoil, except to say I wish it had been in a better book. Kor seems to be the TOS Klingon that gets the targ‘s share of the love from fans, but Kang is more than capable of giving him a run for his money, I feel.

Usually I can dig up a fair amount of information on authors who only wrote one Star Trek novel, but Majliss Larson is a total cipher. Most sites list Pawns and Symbols as their only published work, which of course wouldn’t be correct because you have to have been previously published to be tapped for a Star Trek novel. Only Fanlore.org offers more information: three works, all short fiction. “The Hostage Effect” and “Twintor” were published in issues 5 and 6 of a zine called Nexus, and a general sci-fi story called “Ghostwriters” appeared in an anthology called Organia in 1982. So little biographical information is available that I technically can’t confirm gender (though my guess would be female), and I couldn’t even find a birth date, which, between that and the previously mentioned abundance of sexual situations, leads me to believe it’s a pseudonym, though I wouldn’t know whose. Or Larson could have just been that thorough in scrubbing all traces of identity from the internet. My feeling is, if the Internet can’t find someone, they either don’t exist, or they’re dead. (Anyone who knows anything is more than welcome to leave a comment.)

Pawns and Symbols is unusually poorly proofread, even by Pocket Books’ nearly non-existent standards. Missing commas are the most common blunder here; I’m far from a proponent of the “put a comma wherever it feels like there should be a pause” rule of thumb, but I did barrel through a lot of sentences only to realize midway through or afterward they needed some kind of rest in the middle. Misspelled words, basic grammar goofs, and dicey syntax also appear in abundance. I’m generally very lenient on these sorts of gaffes—almost all Star Trek novels get noticeably more grammatically wobbly in the final third or quarter—but they appear in great enough numbers here not just to be noticeable but also to be emblematic of many of the book’s greater editorial and organizational issues.

But Pawns and Symbols is at least onto something conceptually, and there were even a lot of points where I really got into it, but it just doesn’t come together like it should. Jean is pretty good as prominent original characters go, and both Kang and Mara are brought back and used to great effect, but it all drags on a little too long, falls prey to some irritating things that would have been preventable with even a little attention, and ignores then-nascent trends in Trek literature, somewhat to its peril. Maybe someday we’ll see two consecutive really good Trek novels, but it doesn’t look like today is going to be that day.

Some of the book’s qualities make me want to score it a little higher, but it’s severely hobbled by the distinct lack of professionalism that manifests in numerous ways—bizarre editorial decisions, the poor proofreading, a bloated timeline (the story takes more than a year to play out), and too much sex. While the continued focus on new personalities is welcome, this particular story is sadly too sloppy in too many ways to be overlooked.