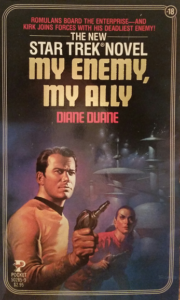 Just two novels ago, John M. Ford took a deep dive into Klingon culture in The Final Reflection, and now Diane Duane takes a similar turn with the Romulans in My Enemy, My Ally, the first of what will be either four or five books (depending on whether you want to count Swordhunt and Honor Blade as one book or two) in the Rihannsu saga. I mean, sure, there was Web of the Romulans, but we’re talking about good books here.

My Enemy, My Ally
Author: Diane Duane
Pages: 309
Published: July 1984
Timeline: Between Motion Picture and Wrath of Khan
Prerequisites: None

Because Diane Duane is usually several light years of imagination ahead of your average Star Trek author, 3D chess is old and busted as of the beginning of My Enemy, My Ally. The new hotness: 4D chess, which is played in a cube with holographic pieces that can be timed out and returned to their spaces later (whether another piece is inhabiting them or not), and which generally requires players to think dozens of steps ahead. Conveniently, this turns out to be an apt metaphor for the story that follows, as human and Romulan alike constantly calculate and re-calculate their adversaries’ motivations and try to work out how much they can trust each other.

The story begins with our introduction to Ael i-Mhiessan t’Rllaillieu (hereafter, mercifully, Ael), a Romulan without a country. She’s ideologically opposed to some plans the Empire has hatched that she finds repugnant and dishonorable, and she’s not going to let a bunch of damn millennials who don’t know the first thing about honor lay waste to the good old ways. For her troubles, she’s been stripped of her ship Bloodwing and put on Neutral Zone border patrol in a beat-up hoopty called Cuirass.

Meanwhile, Starfleet diverts the Enterprise from researching excessive ion storm activity to also patrolling the Neutral Zone border, along with the Constellation, the Vulcan-staffed Intrepid, and the massive destroyer Inaieu. Kirk is given “unusual breadth of discretion”, meaning his actions could earn him anything from the Nobel Peace Prize to a court martial, and that whatever the situation entails, it’s 100 percent guaranteed to be messy as all get-out.

Through various methods of subterfuge, Ael retakes Bloodwing, crosses the Neutral Zone border, blows up Cuirass, and arranges a face-to-face with Kirk, Spock, and Bones. She reveals to them what the Romulans are up to, which is to say: they’re capturing Vulcans and correcting their DNA and RNA for genetic drift so that they can absorb it and, in so doing, regain all the psionic abilities they lost in the generations following their migration away from Vulcan. This is so deliciously evil that my jaw dropped when it read it, so it’s a bummer that outside of its use as a defense system, it never really sees any action. Ael’s plan is to fake-capture the Enterprise so she can take it deep into the heart of Romulan space without starting a war, then use its superior firepower to destroy every trace of the abominable project.

In what will surely come as news to the reader, Kirk and Ael have apparently gone toe to toe in the past, each respecting the other’s brilliant tactical mind. Although Ael is a multidimensional character, and she and Kirk have some excellent exchanges throughout the book (e.g., the “brotherhood” conversation, pp. 160–162), I’m not sure I totally buy them as designated nemeses, except insofar as it would likely be easier for Kirk to trust a Romulan he’s set up to have a history with than Generic Romulan Commander Template. Note that I said easier—it’s going to test every enlightened bone in Kirk’s body to go along with what Ael is suggesting.

My Enemy, My Ally resides squarely in the middle of a minor spate of consecutive stories (excluding The Search for Spock) that seek to explore the humanity and common ground among longstanding enemies whose savagery has heretofore been taken for granted. The next book would work better for the purposes of direct 1:1 comparison, but I don’t want to get ahead of myself, so let’s recall The Final Reflection. That book, while riveting, presented Klingon culture from a safe distance, figuratively (via the framing device of a novel within the novel) and temporally (40 years in the past) as well as physically. My Enemy, My Ally puts the Romulans in close proximity in real time, with each side agreeing to a temporary truce to achieve something for the greater good. The stakes are higher, so the potential net gain for societal progress is greater.

That said—and this goes back to my complaint about Ael and Kirk having a rivalry founded entirely on noodle incidents—it never really feels like either one of them comes close to faltering on their end of the bargain. You sort of expect Kirk to take the high road, based on just sort of who he is and what we expect of the “good guy”, and it’s practically inevitable that some betrayal will occur at some point to help drive conflict, but I really thought Ael would make a grave error at some point—which, as I think about it, says more about me than anything. In reality, you would kill for someone to be as true to their word as Ael (and as heartbroken as she is when someone else isn’t), but in fiction, one can’t help but feel like an integral narrative step was missed.

Still, it doesn’t put that big a dent in the overall quality, since we’re hanging out in the Diane Duane vision of Star Trek, which is always a blast to spend time in, being full of good cheer and excellent chemistry as ever. Small wonder the Romulans feel so welcomed on the Enterprise; anyone would be hard-pressed not to in the company of her characters. Duane’s got, bar none, the best stable of OCs around. Harb Tanzer, Naraht, and Athendë the Sulamid in particular continue to delight after their introduction in The Wounded Sky.

And besides, with four books remaining in the Rihannsu saga, there’s plenty of time yet for political intrigue, alliances and betrayals, and the like to develop. I confess I’m not super into the Romulan as currently laid out, and I’m hoping we’ll get a little more mythology in later installments, but I’m willing to see where it goes.

This grade is based largely on the raw strength of Duane’s writing. I wanted quite a bit more out of this book than I got, but it’s hard to not want to just bask in her universe, which smooths over a lot of gripes. Plus, there’s plenty still to come, and with it ample time for things to get truly bananas.

NEXT TIME: The Tears of the Singers