This week, we take on The Final Reflection, a novel I don’t think can be summarized any more succinctly than by Mr. John Cleese: 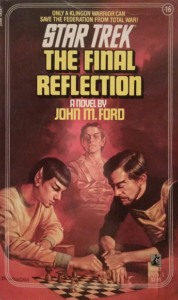 Imagine that it is 1983. You are sitting down at your typewriter to write a new Star Trek novel for Pocket Books. Roughly a dozen have already been published, and more are on the way. Each one has been totally and completely about the continuing voyages of the Enterprise crew. That’s what Star Trek is, after all—Kirk, Spock, and Dr. McCoy are the brave, intelligent, handsome, diplomatic good guys, and the Klingons and Romulans are the savage, bloodthirsty, conniving, barbaric bad guys, as it was, is, and ever shall be.

Would it ever in a hundred years occur to you, the person at the typewriter, that you don’t have to write about the Enterprise, or anyone on it? that you could write about some other unexplored piece of Trek lore, and possibly even upend a lot of preconceived notions about it in the process?

Before Klingons as we know them; before Next Generation gradually molded them into more nuanced, honor-bound characters; before Marc Okrand and tlInghan Hol and the Klingon Dictionary (though just by a hair); before all of that, there was John M. Ford, and there was The Final Reflection.

The Final Reflection is a novel about a novel called The Final Reflection, and if that description tickled you in a fun place, then just drop what you’re doing and go get the book right now, because I can guarantee you you’ll love it. For those who need more convincing, however, I’ll continue. The novel (the in-universe one) has achieved widespread popularity despite (or maybe because of) attempted suppression and Starfleet disavowal. Most of it is factual, but some of it is completely fictional, and the reader never receives the slightest hint as to what parts are which.

The story follows Vrenn, an orphan who lives in a house for those with no lineage at the Klingon military academy and is a Lancer in a game called klin zha kinta, “the game with live pieces” (i.e., human chess, more or less). Vrenn’s team is the best of the best of the best, and they are invited to represent the navy in an important game versus the Marines. Despite the Marines cheating, Vrenn carries the team to victory. His skills as a Lancer attract the attention of the officer dictating his team’s moves, Kethas epetai-Khemara. Kethas is a Thought Admiral, trained to use cunning over brute force, a skill he personally hones by studying other cultures’ board games, like chess. He adopts Vrenn on the condition that Vrenn abandon his dead-end family name and take on Kethas’s, and begins cultivating the same talents in him by teaching him klin zha—in particular, the hardest version of the game, the Reflective mode, in which both players control both sets of pieces.

Kethas’s sink-or-swim tutelage turns Vrenn into a renowned soldier in his own right. He joins the Klingon navy, and during a battle with the Romulans, he gives his captain a strategy that ends up working. Undermining your captain usually isn’t a good career move in the cutthroat Klingon hierarchy, but all of his crewmates respect and admire him, and soon, Vrenn drops the V, adds a K (it’s nifty, by the way, how Ford papers over the fact that so many Klingon names start with K by turning it into an honorific) and reclaims his old family name after Kethas is executed for (gasp!) trying to secretly broker a peace treaty with the Romulans.

Krenn is dispatched to Earth on a peace mission, where amid riots and bigots (including an admiral who admits to Krenn that his hatred would burn unabated even if he “found out Jesus Christ himself was a Klingon”), he meets Dr. Emanuel Tagore, the man chosen as the Federation ambassador to the Klingon Empire. Tagore’s absolute commitment to peace confounds Krenn and his crew so much that, for example, they can’t conceive of the notion that he might actually not be carrying weapons with him aboard their ship. I liked Tagore a lot. He’s intelligent and highly cultured yet not insufferable, and the arc of the Klingons coming to hold him in high esteem and realizing maybe he isn’t as big a weenie as his pacifist outlook might suggest is both compelling and totally convincing.

Pretty much all of the summary above consists of stuff John Ford made up from whole cloth. When he wrote this book, there was no “Klingon culture” to speak of. They were a proud warrior race, and outside of reluctant respect for the worthy opponent Kirk, there were very few additional layers to that concept. Of course, such an exploration would have eventually been inevitable, but the fact that it hadn’t happened almost two decades into the franchise and fell to authors of non-canon literature to delve into is a pretty big gaffe, I would say. Similar to the case with Romulans, Klingons appeared in fewer TOS episodes than I feel like people realize (only four across three seasons). But while they, like the Romulans, found a foothold in the imaginations of writers, only Ford seemed to grasp that they also live, love, laugh at jokes, and sing songs as any other species would—a revelation so obvious as to seemingly not even be worth pointing out, and yet unrealized by so many authors and screenwriters for so long, probably because when you get down to the nitty-gritty, we’re honestly not that much less barbaric than Klingons.

The Final Reflection feels like one of the DNA building blocks of what we’ll come to understand as “event novels”—i.e., unnumbered books that try to tell a more grandiose story than the usual episodic fare (e.g. Spock’s World or Prime Directive). It covers a longer time span than the average STPB, and it’s buoyed throughout by a metaphor that both withstands scrutiny and dovetails seamlessly with the events of the story. I do wonder if the story wouldn’t have been maybe a teensy bit better if it had been presented as a straight historical account rather than within the framing device of a novel within the novel—maybe because on several occasions I disappeared into it and forgot that the amount of truth in what I was reading was supposed to be ambiguous—but it makes sense that it had to be done that way. After all, it’s more realistic that major upheavals in cultural norms don’t happen overnight, and both the Federation and the Klingon Empire would be very hesitant to believe that any Klingon would ultimately choose peace over war, so presenting it as a heavily fictionalized historical novel does keep it from straining credulity too much.

The Final Reflection has proven to be one of the more capital-I Important STPBs. It blazed the trail for similar deep dives into alien cultures—in just a few short weeks, we’ll be getting the Romulan equivalent when the Rihannsu saga kicks into high gear—and at least one idea introduced in it, the Black Fleet (essentially, Klingon Valhalla), ascended to canon in Discovery. Expanded universes often seem from the outside looking in like glorified fan fiction, and when practiced improperly, they end up adding unfortunate fuel to that fire, but books like The Final Reflection prove that you can’t just write the entire affair off as a goofy lark. Because once in a while, they end up making a considerable difference.

John M. Ford only wrote two Star Trek novels: this one, and How Much for Just the Planet?, which is a little less than six months away for us. In each case, he attempted to do something wildly divergent from what you’d normally expect from Star Trek, which is why his books are so memorable despite his lack of output compared to other beloved Trek authors. The Final Reflection is the kind of book you pick up when you’re ready to start moving outward from the security blanket of the Enterprise, and the reward for those willing to take the leap is great.

NEXT TIME: Star Trek III: The Search for Spock