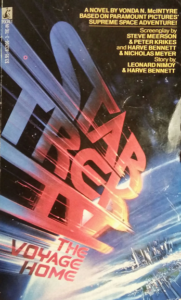 After bearing the brunt of Khan’s wrath and then searching for Spock, the Enterprise crew must now face the music and begin the voyage home for their inevitable court martial. Unlike the last two films, however, Star Trek IV: The Voyage Home is very much a comedy, and this week we’re going to see how that affects the normally unflappable Vonda McIntyre’s approach to movie novelizations. So let’s make like the Enterprise and slingshot ourselves backwards through time to 1986, a world of heavy pollution, hard currency, and double dumbasses…

In case you haven’t seen Star Trek IV … well, first off, you should. But a quick rundown of the basic facts for those who haven’t: Star Trek IV: The Voyage Home is the third part of a de facto trilogy that began with Star Trek II: The Wrath of Khan and continued with Star Trek III: The Search for Spock. III takes place immediately after II, and IV immediately after III. There’s a nice flow there. Voyage Home starts with the crew preparing to face the music and return to Earth for their inevitable reckoning at the hands of Starfleet, whom they defied by returning to the Genesis planet after it was placed under quarantine.

No one on Earth, however, is much interested in disciplining anyone, Enterprise personnel or otherwise, because as they pull up in their beat-up Klingon Bird of Prey, they find a probe approaching the planet. (Sounds familiar.) The probe is disabling everything in its path, and when it doesn’t get the answer it wants from Earth, it starts kicking up some apocalyptic weather patterns in order to write the planet off as a loss. Spock deduces that the language being transmitted by the probe is that of the humpback whale, so they just need to round some up and get them to tell the probe this is all just a wacky misunderstanding, right?

Unfortunately, the humpback whale has the distinct disadvantage of being extinct in the 23rd century, so the only place to get locally sourced, organic, fair trade humpback whales to curb the occasional cataclysmic ice age is the 20th century. Using proven methods, they use the sun’s gravity to slingshot themselves through time, where they have to blend into 1986 San Francisco and figure out how to get their hands on some cetaceans within roughly 24 hours. Temporal displacement hijinks ensue.

The two films preceding Voyage Home were very heavy on drama. As such, that made it easy for McIntyre to add bonus material of commensurate gravitas to the stuff that was already there. Her Search for Spock notably doesn’t feature anything that happened in the movie until almost 80 pages into the book. But Voyage Home is unequivocally a comedy, and the book is equally light in measure. This can come as a shock to a reader who’s been heretofore spoiled by Trek novelizations that reveal rich backstories and inner lives of characters both in the films and not. I really didn’t expect the book to be as slight as it is, comparatively speaking, though I think in keeping with the mandate to ensure this movie was not as heavy as the previous two, it does make a game attempt to convey the movie’s humor as best it can.

Unfortunately, a lot of what’s funny about that humor is in the delivery. I had long been vaguely familiar with the “double dumbass on you” line, but it wasn’t until I saw the movie prior to reading the book that I really grasped why it was so funny. Indeed, Voyage Home makes cursing funny in a way I think is hard to achieve, (cf. Spock’s repeated misuse of “the hell”). And words on a page, no matter how well they’re written, simply can’t beat spoken lines imbued with the chemistry you can only get from decades of working alongside one another, whether it’s Scotty talking into a computer mouse or Chekov wondering where they find “nuclear wessels”. 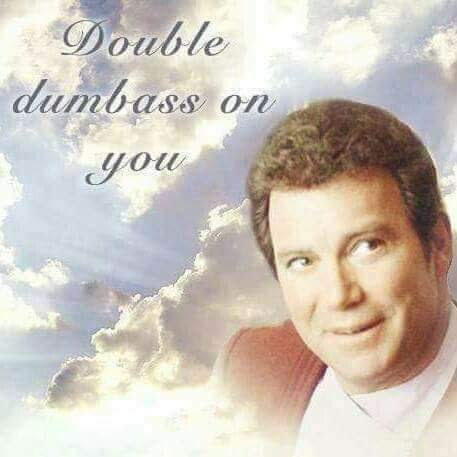 I posted this picture on a Facebook group I’m in and it freaked a guy out because he thought William Shatner had died.

Still, McIntyre works in some interesting angles where she can. The most fleshed-out extras are the two garbage guys who in the film end up running away when they see the Enterprise land in Golden Gate Park and agreeing not to tell anyone about what they saw. Here, they’re named Javy and Ben, and Javy’s line about spending sixty dollars on a toaster oven is spun by McIntyre as dialogue in a novel he’s writing. (In the movie, it just sounds like run-of-the-mill marital discord.) Kirk faces considerably more difficulty selling the glasses McCoy gave him to the antique dealer, who’s expanded to show he’s a Vietnam veteran who quite understandably does a lot of hand-wringing over stolen goods. And I was glad to see at least some of the Cold War-era paranoia and tension that I was very surprised the movie almost entirely elided. A Russian man runs around San Francisco asking where the nuclear wessels are, and hardly anyone bats an eyelash? Uh huh. The probe and its actions are also explained somewhat better, in short sections that open most chapters. (We’ll learn even more a year and some change from now when we get to the sequel, Probe, which even a cursory Google search will show you is a messy can of worms.)

So with the novelization of Voyage Home, the only value-adds you get are a few cute side stories about some largely inconsequential characters, but nothing truly revelatory, like, say, Saavik’s traumatic childhood on Hellguard. Luckily, because it’s McIntyre’s capable hands we’re in, the book never even flirts with anything resembling bad. It’s just that the movie serves most of the material better than any book could ever hope to.

I give the novelization of Star Trek IV: The Voyage Home 3 out of 5 whale songs. Except for fleshing out some extras’ backstories, The Voyage Home‘s novelization isn’t as much of a value-add as the ones for Wrath of Khan and Search for Spock, and due to the strength of the movie’s comedic elements deriving primarily from the cast’s delivery and chemistry, the dialogue mostly falls flat in text. None of this is the fault of McIntyre, who as usual turns in nothing less than her level best.

And with that, sadly, we bid adieu to the McIntyre era of Pocket Books Star Trek. Truly a shame she didn’t do more; few authors, particularly in that earliest era of the novelverse, had as strong a grasp of the characters and their relationships as she did. It’s hardly surprising that she regularly earned praise from Roddenberry herself and that so many subsequent books call back to ideas and elements she introduced. If there was a Mt. Rushmore of Star Trek authors, McIntyre would be a unanimous inclusion.

NEXT TIME: You will never break the Chain of Attack