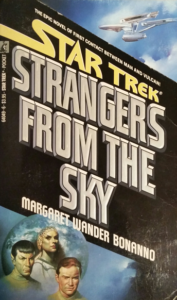 Remember First Contact? Of course you do, it’s great. (At least, I recall that being the case. Not gonna lie, I’ll be kind of shook if it’s not when I revisit it.) Well, this week’s event novel is more like the supermarket tabloid version of that well-known tale. A tell-all book has just been released positing that the series of events generally 555accepted as Earth’s first exposure to Vulcan were in fact not as such, and that the real first contact happened twenty years prior. Meanwhile, Kirk and Spock have dreams, each independently of the other, that they were involved in the whole crazy shebang somehow. Were they? or is the book just that gripping?

It is often said, in a witticism most commonly attributed to T.S. Eliot, that “good writers borrow, great writers steal”. Margaret Wander Bonanno confesses to as much in the Historian’s Note that precedes her first event novel. A Trek-universe story told in the form of a hot, somewhat lurid new book that’s flying off bookstore shelves across the galaxy is definitely something we have seen before. As long as you’re going to steal, you should steal from the best, and John Ford is certainly among the very best. Books built this way are rarely less than solid, and Strangers from the Sky is no exception, though it takes a wildly different tack than simply making the whole book the fictional novel.

Strangers from the Sky is divided into two “books”. Book I alternates between passages from the book-within-the-book and the present day, in which Kirk and Spock, each independently of the other, have dreams triggered by reading the book that they participated in the events therein. Spock theorizes that recall of the events has been blocked somehow, and they have to unblock them to prove to a hardnosed Federation psychiatrist that those things actually did happen and that they’re not cuckoo for Cocoa Puffs (which to be honest is more than a little rude on the Federation’s part—considering how much they’ve been through and how many of Kirk’s hunches have borne out and how many times they’ve saved the galaxy’s bacon, you’d think they’d at least get the benefit of the doubt). On the brink of being committed to the funny farm, Kirk and Spock attempt a mind meld to get the straight dope, within which most of the remainder of the book is framed. Many of the obvious questions, such as why the book-within-the-book is written in a more impressionistic novel style, are quickly dealt with, and though it’s a little difficult to roll with initially, you end up settling into a groove fairly quickly.

In the passage segments of Book I, Tatya and Yoshi, kelp farmers on an agronomy station way out in the boonies of the South Pacific, witness the crash of a Vulcan scout ship and take in the two surviving victims: mission commander T’Lera, and her son, navigator Sorahl. The ship that normally brings Tatya and Yoshi more supplies is dispatched to retrieve the aliens and hand them over to the military, which of course plans to do heaven knows what with them. While Tatya and Yoshi figure out how to keep them hidden, T’Lera and Sorahl butt heads over revealing themselves to Earth; T’Lera wants to abort the mission, but Sorahl—young, naive, and completely unversed in the ways of xenophobia—thinks, “What could possibly go wrong?”

Book II immediately and thoroughly abandons the gimmick, following the crew as portrayed in the show’s second pilot, “Where No Man Has Gone Before”, about a week prior to the events of that episode. Still fairly new to the captain’s chair, Kirk doesn’t yet understand his inscrutable Vulcan first officer, but thankfully, he’s surrounded by good human friends like Gary Mitchell and Lee Kelso, and he somewhat tolerates female shrinks like Elizabeth Dehner. While investigating a planet that appears to blip in and out of existence at totally random intervals, all of the aforementioned crew members are whisked to 2045 Egypt, where they meet Mahmoud Gamal al-Parneb Nezaj (thereafter just Parneb), who is conducting some temporal experiments that the landing party just happened to get in the way of.

Parneb’s one of the weirdest characters to appear in a Star Trek novel yet. Arthur C. Clarke famously said that any sufficiently advanced technology is indistinguishable from magic. Parneb doesn’t just blur that line; he lays waste to it. He’s basically a wizard, and Bonanno doesn’t do much, if anything, to discourage that feeling. He was born sometime in the 23rd century and ages backwards Benjamin Button-style, and much slower than a normal human being to boot. After kicking off the whole fine mess, he spends most of the rest of the book wringing his hands and standing around powerless to help, but I appreciate Bonanno’s continued efforts to bring some Middle Eastern flair to the Trek universe, even if he’s more of a stereotype than Cleante alFaisal.

Bonanno’s prior novel, Dwellers in the Crucible, barely concerned itself with the main cast at all, and though they play a bigger part here, that still remains largely the case. The people of 2045 are the “real” main characters, and the main cast is for the most part only along for the ride. Among original characters, surprisingly, it’s the military personnel who stand out ahead of the pacifist kelp farmers. Jason Nyere, the captain of the supply ship CSS Delphinus, is compelling in his conflict between serving the military and doing what he feels is right. His first mate, Melody Sawyer, represents a solid preview of the kind of xenophobia Vulcans can expect to encounter on unenlightened 21st-century Earth, and to the extent that the book has a concrete villain, she’s a delicious one, especially when you read her lines out loud in her Southern belle accent. (Her tennis match with T’Lera is a particular delight.)

If you haven’t watched “Where No Man Has Gone Before” in a while, I’m going to strongly suggest doing so before reading this book. I had a pretty good memory for what Mitchell and Dehner generally looked and sounded like, but I drew a total blank on Kelso. I’ve observed before that characters who only appear a handful of times tend to be the most ripe for strong characterization and development, and the pilot crew are no exception. Kelso in particular really gets to shine here—he fills the role of tech whiz while Spock tracks down one of his ancestors. Strangers from the Sky serves as a window into what a Trek with this cast fully developed might possibly have been, and having them fresh in your mind is essential to understanding just how much Bonanno has done with them here.

SftS‘s main flaw is that it’s quite sloppily thrown together. Bonanno borrows the “best-selling real version of events captures readers’ imaginations” idea from Ford but doesn’t commit to it, and the book would likely have been better off abandoning it entirely and focusing more in the first half on Kirk sharing identical nightmares with Spock and playing tag with the bureaucracy. A subplot in Book I where Kirk sneaks off to the South Pacific to meet with an Aboriginal doctor about accessing something called “Dream-Time” never goes anywhere. It also peters out at the finish line, ending pretty much immediately after Kirk and Spock break their marathon mind meld and conclude everything really did happen the way they dreamed it, which gives you a pretty good idea of how much the psychiatrist’s opinions meant in the first place.

Despite the structural jankiness and a slightly rocky start, it remains a buoyant read throughout. Although these bigger event stories have over time gotten lost in the shuffle and made obsolete (not that they ever were canon to begin with) by more mainstream sources, they still hold value. They’re still fun to revisit, creative approaches to Big Questions, and interesting reminders of a time when things now thought of as indisputable cornerstones of Trek lore were once considered fringe enough to have to be relegated to tie-in novels, thought to be of interest only to hardcore nerds and wonks. If “Contact Zero” strikes you as a fascinating concept—and frankly, if you’re into Star Trek to any non-negligible extent, I don’t see why it wouldn’t—then Strangers from the Sky will prove well worth your time.

I give Strangers from the Sky 4 out of 5 magical crystal balls. Much like Enterprise: The First Adventure, Strangers from the Sky offered a unique look at a pivotal moment in the timeline long before the canon took it on, and a solid recommend for those interested in such an angle. Though it’s practically held together with duct tape and fishing wire, it reinforces the talent Bonanno first exhibited in Dwellers in the Crucible for examining the relationship between humans and Vulcans and feeling out their emotions as they bridge the gap in understanding between their species. It’s unlikely to unseat First Contact as the definitive version of events in anyone’s headcanon, but it’s definitely worth a read.