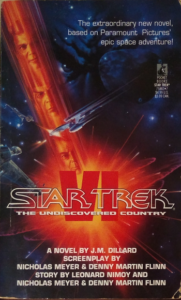 This week, peace sells, but who’s buying? The Klingons, that’s who. Perpetual war, it turns out, is not economically sustainable, and they’re on the prowl for a better business model. But players on all sides have a vested interested in keeping things the way they are, and a road that was as smooth as CGI Klingon blood suddenly becomes very bumpy. If Kirk wants to make a history omelet, he’ll have to break a few prejudice eggs—but starting a fire in his new digs might be kind of difficult. Where did the Organians skip off to? Why is Valeris so emotional for a Vulcan? And to what extent can a novelization critique the movie it’s about? All this and more in Star Trek VI: The Undiscovered Country, the book that actually cares about things that happened in Star Trek V!

After three straight weeks of TNG shenanigans, we’re finally back to TOS, only to immediately get movie sign. But hey, it’s one of the even-numbered ones! Specifically, it’s the one where the Klingons decide to give peace a whirl since constant war is bankrupting them. Starfleet has tapped the Enterprise to host the peace delegation led by Chancellor Gorkon, and while Kirk has aired some shockingly ugly feelings about Klingons stemming from their killing of his son David Marcus, he’s willing to be professional and play his part. A nerve-wracking dinner fills the air with enough tension to be cut with a bat’leth, but at least nobody’s killed anyone yet.

Even that absurdly low bar proves insurmountable when the Enterprise appears to fire torpedoes at the defenseless Klingon ship. Kirk and McCoy beam over to make sure nobody is hurt and are summarily framed and charged with Gorkon’s death in a kangaroo court and sentenced to the mines at Rura Penthe, deep in the heart of Klingon territory. They’ll need the help of David Bowie’s wife if they want to get to Khitomer and crash the peace conference before the saboteurs who manipulated them into the gulag get their way.

As always, what I’m most concerned with when it comes to movie and TV novelizations is the extra material. Sure enough, The Undiscovered Country delivers, albeit in ways I wasn’t expecting. It begins with a prologue in which Kirk pays a visit to a comatose Carol Marcus, who’s in the hospital after a Klingon attack on her latest research site. Flashbacks reveal Carol to be as full of hate for Klingons as Jim, for the same reason (their role in David’s death) and some others, which has the effect of softening Kirk’s extremism by making it appear as though he’s angry on the behalf of someone other than himself. Naturally, as the main character, Kirk enjoys the privilege of rationalizing his racism and riding a tidy redemption arc away from it. Other characters don’t get off the hook so easily.

Unlike other movie tie-ins, Dillard often uses the space here to hold the film’s and characters’ feet to the fire. Lines that pass without comment in the movie are nailed to the wall here—often by Uhura, whose vocal shock and lack of hesitation to call out her peers are the only truly proper reactions to such free-flying bigotry. She cites Scotty drinking with Korrd in The Final Frontier as a “how soon we forget” admonishment and gives Chekov the business for his cheeky “Guess who’s coming to dinner?” remark, as well she should.1This line originally belonged to Uhura, but Nichelle Nichols vehemently refused to say it—another piece of proof for the already staggering pile that black women are often the only true saints among us. The movie exposes these true feelings but often doesn’t hold the characters accountable for them, a mistake this book does its best to rectify.

Dillard also repeatedly addresses the absence of the Organians, which is a great question, not to mention an odd omission in light of how that other Nicholas Meyer-penned Treksterpiece, The Wrath of Khan, relied on “Space Seed” to inform its premise (though even there, continuity occasionally took a back seat to style). Valeris also receives a boatload of supplemental backstory; among other things, her distinctly unVulcan name, lack of emotional control, and motivation for her actions are all sufficiently explored. Previous movie novelizations have brought a lot to the table, and it’s no surprise that this one carries that torch.

The Carol Marcus thread is the main running non-canon concern, but it eventually peters out. And when it runs out of gas, it runs out hard. At first, I thought this was the inevitable consequence of the canon asserting itself (as it must), but when you get down to it, it’s more that it simply doesn’t matter all that much. Whether the thread’s dying off is a simple oversight in narrative detail or an implicit admission of its ultimate lack of use to the story, I can’t say I wasn’t fine with it essentially shrinking to nothing.

As for the conventional wisdom of the even-numbered installments being the so-called “good ones”: having at last seen all the TOS movies, I will say that I can see where that assessment comes from, although I find it unacceptably reductive. The gap in quality between II/IV/VI and I/III/V is tangible, but I’m not prepared to declare all the movies on the wrong side of that gap bad. Each one has at least a few qualities to recommend it, and I”d gladly rewatch any of them. If I laid down a best-to-least-best order right now, it would be: 2, 4, 6, 1, 5, 3.2On the right day, I could probably be convinced to swap The Undiscovered Country and The Motion Picture. And with that authoritative declaration, we bid a fond LLAP to the Original Series films. It’s been a joy to finally understand what the hype was all about.

I give Star Trek VI: The Undiscovered Country 3.5 out of 5 cloaked Birds of Prey. This marks the first time we’ve ever seen an author so openly grapple with the less savory aspects of a script, and frankly, it’s a bracing change of pace. Dillard’s nuanced take sheds much-needed light on nasty and confusing elements of the story that deserve more rigorous examination. It’s a unique approach that makes the book a vital supplement to any viewing of the movie, and I’m interested to see how Dillard applies it to her treatments of the TNG films.

NEXT TIME: We are Spartacus