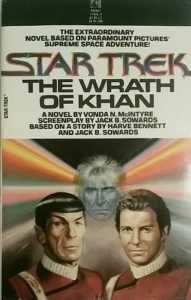 If you claim to be a Star Trek fan (and certainly, if you’re reading a site devoted to its extracurricular novels, I’d argue you’re at least sort of implicitly claiming that) and you haven’t seen The Wrath of Khan, it’s reasonable to ask what you’re even doing with your life. Its biggest development is easily gleaned through passive cultural osmosis, but you can’t just know one spoiler and feel the full impact.

Wrath of Khan is a direct sequel to the season one episode “Space Seed”. In that episode, Kirk found Khan and his followers frozen in stasis on the abandoned ship Botany Bay and brought them aboard the Enterprise. Khan promptly proceeded to attempt to take over the ship by force, and was thwarted. Kirk could have sent him up for punishment but instead dropped the charges and unloaded him and his crew in a planet in the Ceti Alpha system, dangling the carrot of the challenge to build an empire on an inhospitable but not uninhabitable world on the proverbial stick. Khan relished the challenge and accepted, and the Enterprise moved on. Everything seemed hunky-dory. At the end, Spock said, “It would be interesting, Captain, to return to that world in a hundred years and to learn what crop has sprung from the seed you planted today.”

Apparently Nicholas Meyer, the director, agreed, except he wasn’t about to wait a hundred years to see how it panned out. In Wrath of Khan, the planet next to Khan’s exploded about six months into their stay in their new digs, causing his own planet to become even more of a sandblasted hellscape than it already was. Additionally, his wife, Marla McGivers, the Enterprise historian who fell head over heels for Khan and went planetside with him rather than face court martial, died in the intervening years. Khan quickly decided that reigning in hell actually sucks a lot, placed the blame for his misfortune entirely on Kirk, and allowed the idea of revenge to foment and calcify in his mind. The bulk of the film is Khan exacting that revenge, and though he fails overall, he still manages to stick it to Kirk pretty good a few times, including precipitating the chain of events that forces Spock to sacrifice himself to save the Enterprise. I know the statute of limitations for spoilers has pretty much expired for a 35-year-old movie, but you really ought to see it if you haven’t, and knowing that Spock dies doesn’t diminish its emotional impact. (As of this writing, it’s available on Hulu.)

The place my mind goes with the novelization is to compare it to the book of The Motion Picture. Insofar as Roddenberry’s Motion Picture novelization set a bar for these kinds of things, it was a pretty low one: basically a straight read of events with a few footnotes and extra passages to flesh out some plot holes and some unexplained things. Wrath of Khan is a much more streamlined film than its predecessor, so it stands to reason that the book based on it would be shorter. But what’s amazing is that McIntyre crams so many more subplots and interesting details into less space than Roddenberry used. While the novel of The Motion Picture was mostly just useful for people who missed the theatrical run and didn’t have HBO, McIntyre’s Wrath of Khan has real added value that makes it a worthwhile read even if you’ve already seen the movie.

Perhaps its most significant revelation is that Saavik, the Vulcan lieutenant played in the film by Kirstie Alley, is half-Romulan. This is briefly mentioned in footage that didn’t make the final cut, and it certainly provides a valid explanation as to why she runs so hot-blooded for a Vulcan. But McIntyre goes into even further detail, revealing Saavik to have grown up on a failed Romulan colony world called Hellguard and left for dead by a government that denied her very existence as a half-breed. As a Vulcan-Romulan hybrid, Saavik is even more a stranger among two races than Spock, who was on the expedition that saved her and eventually became her mentor.

Other characters have substantially bigger parts as well. Peter Preston—the chipper cadet Kirk meets when he boards the Enterprise—gets a whole arc and then some. He’s revealed to be Scotty’s nephew, which is why Scotty is so emotional in the scene where Peter dies: he’s not just getting weepy over some random cadet—Peter is family. He’s also only 14, and, while smart, definitely more than a little green, as embarrasses himself in front of Kirk and gets a solid dressing-down from his uncle. He develops a crush on Saavik while being tutored by him in advanced engineering physics, and David Marcus’s comforting her after his death sets up the pins for some ideas that will be more fully explored in The Search for Spock.

We also get to see much more of Joachim’s conflict, both internally and between he and Khan. Khan’s right-hand man is loyal to him, but hates to watch him kill needlessly and begs multiple times for him to cash out while he’s ahead. He’s especially opposed to the violence that Khan wreaks on the poor crew members of the Regulus One space station, which is much more gruesome in the novel’s version of events. The unflinching extended portrayal of murder and gore in that chapter really helps underscore Khan’s callousness and brutality in a way that the movie shows only the aftereffects of, in brief discretion shots, and gives the reader a deep and abiding sympathy with a character whose very name is barely mentioned in the movie, if at all.

While these kinds of things would have been a drag on the movie and would likely have ground its momentum to a halt, they’re mostly fine in a book, where you expect to be able to sprawl out and take in details at a more deliberate pace. Sometimes, following original characters for too long a stretch—as in the chapter dedicated largely to Del and Vance, the computer whizzes who like installing huge games on the space station computer—will have you wanting to get back to the more familiar story beats, poignantly enough rendered though they may be. But for the most part, surprisingly little of the extra material feels like bloat. There’s a fine line between “all of the movie plus some nifty extras” and “all of the movie plus some pointless bullcrap no one wanted and no one asked for”, and McIntyre’s novelization thankfully achieves the former distinction.

Wrath of Khan doesn’t get everything right. It feels like it was based on what was not quite the final draft of the screenplay (probably by necessity), so a lot of lines aren’t exactly the same or don’t land in quite the same way. Kirk’s iconic “KHAAAAN!” scream, for example, isn’t rendered satisfyingly, even if you give text more slack for its limited ability to handle such histrionics in a way that wouldn’t come off overly syntactically silly. It wouldn’t be very fair to come at McIntyre too hard for these kinds of shortcomings, however, as her approach to movie novelization outdid Roddenberry’s by many orders of magnitude, resulting in a book that fans of the film would do themselves at least a mild disservice to pass up or dismiss out of hand.

Most of what we will continue to receive from McIntyre is movie novelizations. Sadly, she only has one more original story waiting ahead of us: the event novel Enterprise: The First Adventure. I can’t help but feel like this is at least somewhat of a waste of her talents, but if we’re going to have someone doing movie novel duty, I’m at least glad it’s someone proven so capable.