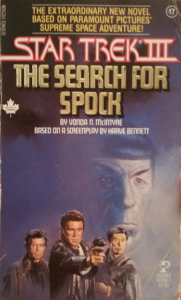 For the sake of best practice, I make a policy of watching a movie immediately prior to reading its respective novelization. Naturally, this causes me to feel an acute apprehension about redundancy. I just watched the movie, I think. Is this really necessary? One of the more surprising benefits and pleasures of running this little website has been not only realizing that that worry is misplaced, but seeing it gleefully dashed against the rocks, and The Search for Spock represents the most thorough obliteration yet.

Briefly, let’s recap the degrees to which previous novelizations have diverted from and/or expanded upon their source material. Gene Roddenberry’s Motion Picture book was a mostly straightforward account with minor footnotes and an unbecoming prurient interest in various facets of 23rd-century sexual interaction. Vonda McIntyre took over for Wrath of Khan and provided rich backstory to characters like Lt. Saavik and snuck in a few chapters’ worth of nifty original characters and content, all while keeping it relatively streamlined. McIntyre is back in the saddle for The Search for Spock; did she deliver the goods again?

Let’s put it this way: it literally takes until chapter four (4) for anything that happened in the movie to come up.

In case you’re keeping score, that means, yes, that we don’t reach the beginning of the movie until fully a quarter of the book has passed. The first three chapters comprise, essentially, an extended prologue that serves three primary purposes: 1) to explain why Saavik and David Marcus are serving aboard the Grissom and Carol Marcus isn’t; 2) to eulogize the original characters of McIntyre’s who died at the hands of Khan (especially Vance Madison, who is revealed to have been Carol Marcus’s lover; Carol visits Vance’s parents in a non-sequitur scene late in the story); and 3) to set David and Saavik up as a romantic item. Lord have mercy, does McIntyre establish that. David and Saavik get it on twice within the first 30 pages—the first time, after an ill-advised wake for Spock arranged by Bones and Scotty, where Saavik asks David if he’ll help her “find her path”, and then immediately afterward, when they conduct “experiments”—in the name of science, of course, of course—to test rumors that Romulans are insatiable. Is it me, or did someone mess with the environmental controls in here…?

Sometimes the amount of padding feels so excessive, you couldn’t be faulted for thinking you’re actually reading The Search for The Search for Spock. It’s almost an original story in its own right. But one could reasonably argue that the book requires that much supplemental material if it wants to be thicker than a slice of American cheese. Despite being an hour and 45 minutes long, the movie is pretty breezy and not a whole lot actually happens. (My wife came in only about 20 minutes from the end, watched a little bit, and remarked, “I don’t feel like I’ve missed anything.” It was hard to say she was wrong—she really hadn’t.) Kruge is a lame villain; Christopher Lloyd was scarier as Judge Doom than he was as a Klingon. And of course there’s the old saw about catching the even-numbered Star Trek films and passing on the odd-numbered ones, but Search for Spock is adequate, if not mind-blowing. A lot of the original material added by McIntyre helps this installment feel more vital and like there’s more at stake.

The book and the film also have entirely different dispositions. The movie is what I would call “rompy”: right out the gate, after a quick recap of the end of Wrath of Khan, the gang is gung-ho and geared up for a hastily planned, illicit adventure. Meanwhile, the book actually pauses to remember that a man with whom everyone had a profound connection and considered a close friend literally just died, and accordingly, they all have to contend with their grief, with many of them not handling it very constructively, and some of them while concurrently getting dogpiled by the universe in other ways—e.g., Sulu having command of the Excelsior cruelly yanked from him, Scotty dealing with familial tumult, etc.

I found the Scotty bits are particularly compelling, because we get a point of view that often gets lost among all the space gallavanting, from someone who thinks the Enterprise’s shenanigans are irresponsible and reckless rather than heroic and who doesn’t think Kirk is all that and a bag of replicated potato chips: Scotty’s niece Dannan. In fairness, Dannan has a good point: it’d probably be pretty hard to see the forest for the trees when your uncle had your brother assigned to his ship, rode him like a pack mule, and then let him die under his command before he could legally drink. Scotty is so jovial and optimistic even in the face of danger that it’s really off-putting to see him angry, stymied, and nearly violent with someone. But of course, the show must go on, and like all the bonus material, it’s eventually forced to make way for the events of the movie without being allowed to resolve, except perhaps in some later book I haven’t gotten to yet.

That lack of resolution of non-canon plotlines is indicative of a kind of overall messiness that’s more the fault of the movie’s style forcing itself on the direction of the book than anything McIntyre did, but it’s still a fine product. This book does render the movie’s dialogue closer to verbatim than the Wrath of Khan novel, so it felt more like I was reading something actually developed concurrently with a filmed product than something gleaned from an early draft. It’s thus far the most reminiscent of its respective film, while also having the most supplemental goodies. At this rate of progression, the gulf in quality between Star Trek V and its novelization will make the Grand Canyon look like a crack in the sidewalk.

Search for Spock sets a new bar for the amount of original material that can be crammed into one of these movie ports. I really must stop worrying about these movie novelizations, particularly with McIntyre at the helm. Here, she finds a lot more openings for new subplots and angles among the canon events, and although there’s barely room in this town for the both of them, she ends up achieving a fuller product. It’s a shame there’s only one more movie novel by McIntyre, but I hope to find as I read on that her successors followed the rigorous standards her excellent novelizations set.

NEXT TIME: My Enemy, My Ally