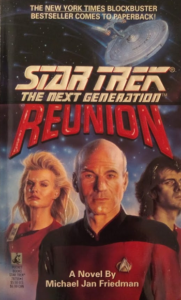 This week, a coronation ceremony brings Picard back into the orbit of his former coworkers. But when one among them starts putting the others out of commission, Picard’s crew will have to put on their Dixon Hill hats to suss out the culprit. Meanwhile, a subspace slipstream carries the Enterprise off course, and it’s too deep to ford the oxen across. What’s the real story behind Jack Crusher’s death? Which Earth foods do aliens enjoy? And what does Dr. Crusher do while she’s on the toilet? All this and more in Reunion, the book that remembers when the Yankees really did suck.

Reunion
Author: Michael Jan Friedman
Pages: 343
Published: November 1991
Timeline: Between “Suddenly Human” (S4E4) and “Remember Me” (S4E5)
Prerequisites: “The Battle” (S1E9) is referenced, but you don’t have to go back and watch it or anything
Not to be confused with: “Reunion” (S4E7)

Summoned back to his homeworld Daa’V to fulfill his birthright as its ruler, Captain Morgen1Please save your jokes for the end. of the Excalibur assembles an honor guard consisting of old friends from the Stargazer, including his former captain, Jean-Luc Picard. One by one, they arrive on the Enterprise: Morgen, the Daa’Vit heir; Idun Asmund, now first officer of the Mansfield—raised by Klingons (a sort of reverse Worf), still doing mostly self-inflicted penance for foul deeds committed by her deceased twin sister Gerda; “Pug” Joseph, their old security chief, now a bitter alcoholic; Gilaad Ben Zoma, now captain of the Lexington; Carter Greyhorse, whom Beverly worked with at Starfleet Medical while she was gone during season two; Phigus Simenon, reptilian chief engineer turned Academy professor; and Tricia Cadwallader, a spunky Australian woman who mentored under Joseph and promptly left him in the dust once she got promoted ahead of him.

The Stargazer team’s arrivals and interactions with the Enterprise crew comprise Reunion‘s interminable first act. The book doesn’t kick into high gear until Worf and Morgen are nearly killed in an act of holodeck sabotage, forcing Picard to confront the unsavory possibility that one of his erstwhile crewmates is a cold-blooded assassin. Matters go from bad to worse when the Enterprise accidentally enters a subspace phenomenon called a slipstream; no matter how fast the computer says the engines are going, the current carries them along at warp nine point nine five. If they can’t get out and back on course with enough time to backtrack to Daa’V, the consequences for Morgen will be dire, albeit ill-defined.

Reunion isn’t the worst Star Trek book I’ve read so far, but it was without question the most boring. My dislike of seeing these characters used to solve detective mysteries is already well-documented. What I haven’t talked about as much, if at all, is why I don’t like it. I don’t mind internal drama, at least to a point, but whodunits run totally counter to the idea of discovering strange new worlds and seeking out new life and new civilizations. We could have learned more about the Daa’Vit and gotten embroiled in any number of conflicts involving their society and/or royal structure. But we don’t see Morgen’s home even once. Instead, we get a bottle episode stretched dangerously thin across the increased bulk of an event novel. What good is a starship if you never leave it?

Reunion spends dozens and dozens of pages on the most soporific crap imaginable. As mentioned earlier, it takes forever for everyone to converge upon the Enterprise, and then it takes another forever while everyone just kicks back and gets to know each other (not that that’s bad, it just takes a long time). The business with the slipstream takes almost half the book to solve, requiring just under 150 pages of the novel’s real estate. This is time that could be better spent, say, developing Worf and Morgen’s relationship. The Klingon and Daa’Vit have a mutual hatred of each other, but as Starfleet officers, Worf and Morgen commit to putting aside their prejudices and forging unprecedented bonds. Wouldn’t a story with Worf becoming part of the honor guard2which he does at the end, but the consequence and fallout of it are left to the imagination and having to win over Daa’Vit society been way more fascinating? You know a book really beefed it when a Worf-centric plot would have improved it.

It’s a shame stories are required to have conflict, because this one really only comes to life when the Enterprise and Stargazer crews commingle. Riker/Cadwallader and Wesley/Simenon stand out as the top pairings. Riker, naturally, develops romantic feelings for Cadwallader, though she makes an interesting enough foil to make the pursuit engaging. Simenon makes a good mentor figure for Wesley, never patronizing him or condescending to him and choosing wisely when to be forthcoming and honest. Morgen is also a well-rendered character—that is, when I can manage to stop picturing him with his leg hiked up on a barrel—and, as stated previously, there are far more intriguing possibilities in his fledgling friendship with Worf. It’s good that most of these characters are fun to hang out with, because we’re going to be seeing more of them later on when the Stargazer gets its own spin-off books.

Picard’s time on the Stargazer is certainly a topic that is ripe for digging into, and although the characters are well-established here and seem like a decent bunch, this particular story gives them absolutely nothing interesting to do and nowhere to go. With the slipstream taking up so much of the action, Simenon does most of the heavy lifting with Geordi and Wes while most of the rest of the Stargazer characters remain on lockdown during the investigations. Some major questions about series lore finally get answered, most notably the details of the death of Jack Crusher, but even a revelation that major can’t do much to pull this one out of the mire.

It almost makes me wish there was some kind of Bulwer-Lytton–type contest for purple transporter prose.

I give Reunion 1.5 out of 5 subspace slipstreams. Man alive, this one is a dreadful bore. I had the hardest time I’ve ever had wanting to pick this one up. It was such a difficult drudge that it managed to derail the 86-week streak I’d had going, posting one review a week without fail from the beginning of the site in October 2017 until just recently. There’s barely enough here to make a regular numbered installment interesting, but when you stretch it out to event novel length, it’s completely hopeless. The new characters that are introduced are solid enough, but most of them are knocked out of the game early or stuck in a position where they’re not able to adequately contribute solutions to the problems that arise. This one just does not cut the mustard, at all.

NEXT TIME: Spock works with the Romulans to achieve Unification