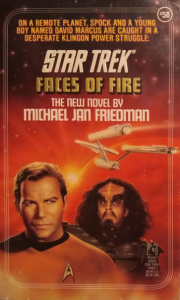 This week, the Enterprise picks up yet another blowhard ambassador to mediate a religious dispute involving a sacred animal, but Spock opts out to tinker with a cool laser on a terraforming colony. But the Klingons, up to their usual cloak-and-dagger shenanigans, descend on the colony to steal the beam in hopes of weaponizing it. Will Kirk and the ambassador figure out how to relocate the animals? Can Spock successfully collaborate with a bunch of tweens? And how much does it suck when annoying people are right? All this and more in Faces of Fire, the book that will make you openly yearn for the death of a child.

The Enterprise is en route to Alpha Maluria VI to help settle a civil dispute, and to assist them, they’re taking with them Marlin Farquhar, the sort of smarmy, know-it-all diplomat the Federation has in seemingly infinite supply. But first, they have to stop over at Beta Canzandia III to check on the health of the scientists and get an update on the progress of their terraforming research—a detour Farquhad is quick to register his impatience with.

Among the residents of the Beta Canzandia colony are a young boy named David and his mother Carol, who should ring a bell—the latter especially, considering we last saw her a mere two books ago. Yes, it’s that David and Carol—Marcus, that is. Although Kirk and Carol have their usual strained back-and-forth and agonize as always over what might have been, David actually gets the lion’s share of the character development this time around. David hangs out with the other scientists’ children, but is mercilessly bullied by the oldest, Timmy Riordan. Only one other kid, Keena Medford, shows him. any sort of sympathy or kindness.

The plants grown by the G7 beam (no relation) aren’t producing the correct amount of oxygen, so Spock volunteers to stay on Beta Canzandia and help them figure out what’s wrong with it. Of course, no sooner does the Enterprise depart for Alpha Maluria than the Klingons arrive, laying waste to the research domes and setting their sights on the G7. David assumes a leadership role among the children, taking them out to a valley dotted with caves that will lower their chances of being found and killed. Spock joins them shortly thereafter, and together they set traps to outwit the Klingon invaders as they make their way back to the sundered settlement.

Focusing as much as this book does on kids can be a sticky wicket. It certainly fills me with trepidation, in any event. “Rascals”, for example, is one of my very least favorite TNG episodes. Lest you worry that Faces of Fire will evoke memories of that episodes, or perhaps of something like, say, “I’ve Got Batman in My Basement”, let me assure you your fears are unfounded. The kids in Faces of Fire actually carry themselves with a lot of maturity and poise, given how scary their situation is. David in particular experiences a lot of major personal growth as he comes into his own as a leader to his friends and begins looking to Spock (in a rather amusing touch of irony) as a father figure.

I acutely felt David’s pain in his struggle with fatherlessness. David understands intellectually that having a father isn’t a requirement for becoming a respectable man, but nevertheless he wants one more than anything else. I see this exact thing every day in my own life. My wife and I raise our nephew, and while we’ve provided him with all his needs, most of his wants, and a pair of hopefully adequate adult role models, for him it’ll never be the same as it would be if it was his biological mom and/or dad giving him those things. He’s openly expressed as much. And while that hurts, I understand and accept it. So I really get where David is coming from here.

So then for me, it’s all the more frustrating when all that wonderful character development David Marcus gets is forced to crash into a brick wall of canon. After he’s emerged safely on the other side of a harrowing experience and earned the respect of his peers and done a lot of good maturing and growing up, he sees Kirk show up for the cleanup at the end, and without warning he projects the maelstrom of all his bottled-up anger onto him. A lot of solid reflective growth goes right out the window so that the canon can assert itself. It makes the entire story that came before it feel like a total waste of time.

I know I spent a lot of energy on what is nominally the B-plot,1It’s a little bit insulting that the two threads are labeled in so unsubtle a fashion. Literally, Alpha Maluria and Beta Canzandia? Even worse because the Beta side is actually the bigger deal overall. but I swear other things happened in this book too. Kirk and Farquhar’s business on Alpha Maluria involves having to somehow redirect the meanderings of a sacred animal without blaspheming and instigating a giant crusade. By the time they finally arrive, the situation has escalated to rioting and bloodshed, which annoyingly validates Farquhar’s insistence that they should have gotten there sooner. Kirk further annoys Farquhar when the councilmen show a clear preference for his direct no-nonsense approach over Farquhar’s cloying obsequiousness. Kirk, Bones, and Scotty soon realize they’ll have to go behind Farquhar’s back if they want to make any real progress, which results in some moderately fun espionage.

The most boring part by far is everything involving the Klingons. Supposedly, some Klingons are tapped by none other than the emperor himself to put the kibosh on those aligned with an especially war-hungry faction from the southern continent of the homeworld, but this goes nowhere. I rarely enjoy sorting through all the backstabbings and double-crossings of Klingon political intrigue, especially when all it results in is a plan crumbling due to everyone trying to step over everyone else to get their hands on their own personal pie in the sky. The major reveal is that the second officer of the Kad’nra is none other than Kruge. He eventually takes command of the Kad’nra through the deaths of everyone above him, but the picture of how he got from there to a captaincy in Search for Spock remains incomplete and unsatisfying.

After the execrable Reunion, Faces of Fire represents a return to form of sorts for Michael Jan Friedman, which is to say a return to his usual inoffensive mediocrity. It’s surely mostly a coincidence that it features an issue that strikes such a personal chord with me, but it does nevertheless go a short way in improving it slightly in my estimation. It’s just too bad all of the wonderful personal growth of David Marcus goes straight in the trash can before the book’s even over. I’m well used to the events of the novels not being canon, but that doesn’t make it any less jarring when you’re so forcefully reminded of it so soon after they happen.

I give Faces of Fire 2.5 out of 5 Klingon fireblossoms. While the business with Kirk and the ambassador isn’t bad, it also isn’t terribly exciting. There’s some really good stuff with David Marcus in the B-plot that I connected with on a deeply personal level, but it all gets shoved off the table at the end so that he can immediately become the tightly coiled ball of anger we meet at the beginning of Star Trek II. All that plus a bunch of boring Klingon junk equals yet another MJF novel that fails to add up to anything truly satisfying.

NEXT TIME: Prepare your anus for Probe