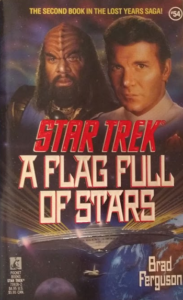 This week, Nogura promotes Kirk from construction foreman to media liaison, but it’s his marriage that could really use a little bit of good P.R. Meanwhile, a Klingon schoolteacher in New York has invented a super ball with a heck of a bounce, attracting the interest of some of his less savory brethren. What’s the deal with Timothea Rogers? Will Kevin Riley pull his self-esteem out of the toilet? And won’t someone think of the children? All this and more in A Flag Full of Stars, the book that still celebrates Columbus Day.

A Flag Full of Stars
Author: Brad Ferguson
Pages: 241
Published: April 1991
Timeline: Between The Lost Years and The Motion Picture
Prerequisites: The Lost Years by J.M. Dillard; “The Conscience of the King” (S1E13) (for expansion on Kirk and Riley’s survival of the Tarsus IV massacre)

A few months ago, we looked at The Lost Years, which sought to fill in at least some of the gaps between the end of the five-year mission and the beginning of The Motion Picture. That effort continues in A Flag Full of Stars, a much more intimate and low-key story that couldn’t hardly be more different from its predecessor.

Kirk’s marriage to Lori Ciana isn’t going so hot, though his career is (from a certain point of view) (not his). The refit of the Enterprise overseen by him came in ahead of schedule and under budget, and since he’s got more than enough charisma and good will to supplant ice queen Timothea Rogers as the public face of future Starfleet projects, Nogura deftly maneuvers him into the role. Meanwhile, Kirk’s chief of staff, Lt. Cmdr. Kevin Riley, continues to contend with many of the same issues he dealt with in The Lost Years—namely, his self-perceived lack of aptitude for a career in Starfleet and his feelings in the wake of his marriage contract with Anab Saed, who has decided not to re-up.

But the real main character of AFFoS, arguably, is G’dath, the Klingon whose invention drives the overwhelming majority of the action. Disgraced mainly, it seems, for the grave Klingon sin of preferring his physics theoretical over practical, G’dath is slumming it in New York, teaching an experimental course for gifted pupils. But in the words of a much-maligned Grateful Dead song, he’s keeping his day job ’til his night job pays, and he’s about to hit the jackpot. He’s created a small spherical device that can travel hundreds of light years in seconds and take any ship linked to it along for the ride. G’dath is excited by the possibilities, but also acutely aware of the potential for people going to war over it, and tries to keep it on the down-low.

That proves, naturally, to be impossible. G’dath has been under observation for some time by two Klingons named Keth and Klor, and his invention is the big score that’s finally going to get them out of this backwater assignment and back to their families. Once they have enough dirt on him, they make their move, and that’s when all of the book’s threads begin converging on the big climax.

The most significant thing you might notice about A Flag Full of Stars up front is that it’s been downgraded from event novel to simply another of the numbered books. It also suffered numerous delays due to, among other things, an injury on Ferguson’s part and frustratingly contradictory editorial notes. While the downgrade to numbered status might seem like a subtle hint as to a hit to the series’ quality, it’s as fine in its own way as The Lost Years was. As you might expect from the title, there’s a little bit of push-and-pull on the subject of nationalism: on balance, it’s mostly a bad thing, but it helped inspire great things. But for the most part, the focus remains primarily on G’dath and secondarily on the up-and-down personal fortunes of Kirk and Kevin Riley. Spock doesn’t appear in this one at all, and McCoy only shows up once, calling in to a TV (sorry, 3V) show to needle Kirk during an interview.

I was also surprised by was how well the teenage characters were written. The classroom scenes in particular have a crackling intensity that I hope eventually carries forward into the Starfleet Academy books for teens (which I’ve decided I will cover here).1Ferguson himself wrote one of these books, The Haunted Starship, with a co-author credit from his wife Kathi. I can imagine a reader in 1991 being annoyed with a book taking time to focus on children after feeling so put out by the whole Wesley business, but their interactions are believable—mature, not too far above their age, perfect tone for a gifted class—and there’s never not enough room, especially in 2019, for a simple lesson on the perils of nationalism and racism (plus subsequent redemption arc).

If you’re familiar with Brad Ferguson’s only other Star Trek book to this point, the execrable Crisis on Centaurus, it may surprise you that this book is so smooth and agreeably digestible. In fact, it may strike you as suspicious. I didn’t do any hard statistical analysis, but anecdotally, I’d say authors tend to hover within a one- to two-point scoring range. For instance, Vonda McIntyre is never going to suddenly crap out a 1.5, and Robert Vardeman is highly unlikely to turn in a 4. Such a pronounced improvement from the likes of Brad Ferguson seemed unlikely, so I did some digging. I didn’t have to dig very far to find out there was a very good reason the bells went off in my head: the final cut of A Flag Full of Stars is actually an uncredited rewrite by J.M. Dillard. After four drafts, Pocket Books remained unsatisfied with Ferguson’s version, and handed it over to Dillard to clean up and finish. You can read and download the original draft in PDF form if you so choose.

I thought I might review that draft separately, as I plan to do when we reach Margaret Wander Bonanno’s Probe at the end of July, though following a brief perusal, I deemed it unnecessary. It’s essentially the same story, just a lot shaggier, and filled with those distracting Fergusonisms that made Centaurus so bone-crushingly dumb, like brand names (G’dath’s home computer is an “IBApple”) and insane choices in naming conventions (calling New York “N’York”; shortening Nogura’s first name to “Hy”). A very small portion of that sort of thing survives to the final cut, but only the most innocuously lame instances, like “3V” and “WorldNews”; rock-stupid words like “fonecom” and “RAMspam” mercifully get the axe.

More distressingly, there’s a slimy veneer of misogyny in the original, none of which is extant in the published product. The original draft posits that Admiral Timothea Rogers is actually Pike’s old first officer Number One, a revelation that ends up unnecessarily maligning a good character, and she and Kirk have a rather sour confrontation over drinks. Early descriptions of her are singularly unflattering. Ferguson’s redundant Scotty II character Alec MacPherson calls her “[that] pesky woman”, and she’s portrayed very uncharitably in the first WorldNews interview segment as “middle-aged and beginning to look it”; meanwhile, Robert April, despite pushing eighty, looks “distinguished”. Also, the dissolution of Jim and Lori’s marriage is far more bitter, with a chilling finality. Dillard made them far more amenable to friendship and eventual reunion, to the book’s benefit.

At least one choice in the original draft makes somewhat more sense. G’dath and Nan Davis both die—the former a more realistic and braver outcome that rings more true to both narratives, not just Ferguson’s own; the latter just sort of a kick in the pants, especially to the already much-beleaguered Kirk. In an afterword in the PDF dated March 1996, Ferguson says he believes the final product was “bland, badly handled and poorly crafted”. He can believe that all he wants, but the fact is that Dillard on an off day is ten times better than Ferguson at his best. However one feels about the editorial arm of Pocket Books—and there are plenty of reasonable criticisms to lob at it, especially from this era—this was unequivocally the right decision, and I’ll take this sanded-down, sanitized rewrite eight days a week.

There’s only so much one author to do to salvage another’s work, but Dillard did about as well as she could. It should be said, however, that the bones of Ferguson’s idea are sturdy and capable. I have a feeling little actual rewriting was needed, and that most changes were made simply to smooth over either Ferguson’s astounding lack of facility for technobabble or his nasty snipes at women. I also wish there had been more coverage of Lori’s tour of the settlements of the new humans, a concept that’s rarely covered and poorly done when it is, though perhaps one of the other two Lost Years books will cover that ground. Like its predecessor, this one is good, but not quite great.

This week, we’ve got to pour one out for Mr. Olesky, G’dath’s neighbor. When Keth and Klor come poking around looking for the speed globe, Mr. Olesky pops out to see what they’re up to, and gets a judo chop to the neck for his trouble. This is an unusually senseless death for Star Trek, worse even than Tasha Yar or any old random redshirt. He’s just a nice old man, and a friendly and gently humorous one at that! To Klor’s credit, he tried to go easy on him without Keth noticing, but poor Mr. Olesky was so old and fragile that even a disabling blow killed him. I’m not gonna lie: this one really bummed me out for a while.

I give A Flag Full of Stars 3.5 out of 5 speedy little globe devices. At least a full point of that score—if not more—can likely be attributed to Jeanne Dillard’s punch-up, though the basic concept and most of its individual aspects are solid enough at their core. Still, this saga hasn’t yet managed to break out of “average” status, and with only two more entries to go, it’s got precious little time to pick up the slack.

NEXT TIME: Revenge is a dish best served to the Borg in Peter David’s Vendetta