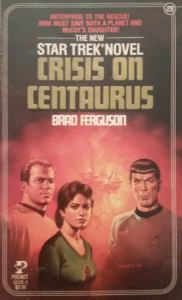 This week, we tackle a book that promises a lot more Joanna McCoy than it delivers. Plus: malfunctioning computers, antimatter holocaust, Uhura at the conn, and enough product placement to make an Adam Sandler film look like a paragon of subtlety. It’s Crisis on Centaurus, or, Mission to the Planet That’s Basically Earth But the Title Crisis on Earth Isn’t As Catchy or Compelling or Alliterative.

Gravity and other assorted environmental controls are on the fritz. Sonic showers and toilets seem to have been un-invented, because everyone is trying to avoid getting hit in the face by floating globs of dookie water. Once a matter/antimatter snafu nearly blows up the entire ship, Kirk immediately diverts to Starbase Nine. No can do, however: Starfleet reroutes them to Centaurus, where someone detonated an antimatter bomb at the New Athens spaceport and killed almost a million people.

The Enterprise pulls up to the planet and almost immediately they nearly get a nuke in the face. Apparently they’re not the only ones who could use a visit from the Geek Squad, as readings show Centaurus is having computer problems as well. While Spock, McCoy, and Chekov shuttle down to dig through the wreckage and launch all of the planet’s nukes into the sun so no other approaching ships get blown to smithereens, Kirk and Sulu meet with government officials to see about nailing the prime suspects, a group called the League for a Pure Humanity, who are so boring as to not even warrant further mention.

Ferguson front-loaded Crisis on Centaurus with a bunch of backstory to give the mission more personal gravitas, though ultimately most of it doesn’t matter. Kirk owns a ton of gorgeous land on Centaurus that he somehow got on the cheap, and Dr. McCoy was the doctor who shepherded him through his physical therapy when he got his leg torn to shreds while saving the Farragut. But the real “now it’s personal” reveal is that Joanna McCoy, Leonard’s daughter, is a nurse on the planet, and works (not past tense, they hope) somewhere well within the bomb’s blast radius. Every now and then, Kirk fleetingly remembers Joanna exists and thinks, “Gosh, I sure hope Joanna isn’t dead.” Obviously she’s not, though given how little she appears in the book and what little impact she has on the story, she may as well be. She makes her first appearance with just 80 pages remaining, and her reunion with her dad, though heartfelt, is totally unearned.

Dr. McCoy’s daughter Joanna. If you know anyone who kept a photo album in the 80s, there’s probably someone in it who looks like this.

Though she never made any appearances in the show, Joanna McCoy is a canonical element of the series. D.C. Fontana added her to the series bible in season 2 after proposing her to and receiving feedback from DeForest Kelley. Roddenberry envisioned her as someone who could come aboard the Enterprise and Kirk would hook up with her, causing friction between him and Bones. Ferguson, however, found that idea repugnant (and I happen to agree with him), and reworked it so that Kirk had a more avuncular relationship with Joanna. That actually sounds pretty great—until you realize the book doesn’t use it at all and she only appears a handful of times for a total of maybe five pages, wasting all that primo setup.

Wasting Material is practically this book’s middle name (not that it’s good material to begin with). For example, Uhura taking the conn is painted as a big deal, but she only gets it because literally every other senior officer is tied up with something else, and everything goes perfectly smoothly for her and her totally mayonnaise third-string crew, with nary a whiff of conflict or real moment of suspense. In another instance, Spock finds that the ship’s malfunctioning is the result of small, perfectly circular holes seemingly drilled into most of the arrays in the ship’s central computer. It’s revealed at the end that the cause was a black hole forming right in that space while the ship was in mid-warp, which Spock admits should have blown the Enterprise’s atoms all over the galaxy. When Kirk asks why it didn’t, Spock gives him that most quintessentially Vulcan of explanations: ¯\_(ツ)_/¯

Aside from the underuse of Joanna and the other above gripes, there are yet more telltale signs that this book is going to go south in a hurry. For instance, Scotty’s Highland brogue and Chekov’s Russian accent are written and rendered at a level of cringeworthiness not seen since the earliest days of the novelverse. But another big thing, the one that really permeates the whole book in a thin coat of grease, is: brands.

Brands make their mark all over this book. Within the first three pages, we see Coca-Cola and Sheraton hotels, and a Tellarite goes postal on an ATM when it eats his American Express card. At other points, Kirk and Sulu stay in a Hilton hotel, and Spock carries around a Day-Brite (Philips) lantern. Don’t get me wrong: a future without Dr Pepper is no future I’d want to live in. But my default feeling about Star Trek‘s economy is that it operates in a post-scarcity paradigm, something I first glommed onto after it was mentioned in passing in First Contact, despite the fact that currency shows up in and is used in other series all the time. This book, however, takes it to a whole other level. Actually, in a couple of ways, it makes a sick kind of sense: one, it wouldn’t really be all that surprising to learn that plenty of corporations had managed to survive huge disasters like World War III and the Eugenics Wars, and two, Centaurus being a largely capitalistic society wanting to handle things its own way serves as both a marked contrast to the socialist utopia of the Federation and an early bit of foreshadowing that they’re going to blanch at having the Federation intervene in their business. However, it also raises the types of dumb, hacky questions I hate thinking about, like “So who manufactures starship parts? Lockheed Martin?” or, “Does Apple or IBM or whoever make all the stuff for starship computers? Or have all the companies finally merged and standardized their equipment?” Not to mention some other things I bring up in the Nuggets down below. So I’d rather that sort of thing just not muck up my Trek to begin with.

With all the emphasis on recognizable products, it should come as no surprise that Centaurus itself is basically Earth II (not to be confused with any similarly named alternate timelines). In some instances, you get the feeling that Star Trek characters were grafted onto a pre-existing non-Trek story. With Crisis on Centaurus, you feel like Earth was copied and pasted onto a different planet. Check out all the creative names Ferguson came up with for Centaurus’s cities and continents: New Athens, New America, New Europe, and there’s a third uninhabited continent—bet you can’t guess what it’s called!

Also, characters who are much less interesting—and in some cases, have no business even existing—get a lot more page time. Alec MacPherson is Scotty’s assistant, but I’m surprised I even bothered with his name, because it may as well have been Scotty II, or maybe Scotty With Muscles. Weirdly, this isn’t even the first time an author has given Scotty an assistant who’s a total carbon copy of him. I guess theoretically there could be value in having two Scotties so that he could be in two places at once or his legendary skill set would still be available if he got taken out, but eliminating a character that possesses valuable skills raises stakes and is almost always an easy yet still entertaining handicap. Most stories get by just fine with just the one Scotty anyway. Why do multiple authors insist on creating this redundancy?

Not all of this book’s flaws are Brad Ferguson’s fault. The back-cover summaries on these books are notoriously unreliable (and sometimes spoilerrific), and the authors don’t have any say in their composition, but this one especially does no favors for a book that could desperately use a few. But mostly, it’s on him. He’s got a character with virtually no history beyond a bare-bones description, a fresh block of granite waiting to be sculpted into any number of fascinating possibilities, and what does he do with her? Diddly squat. It’s easy to accuse female OCs in these books of being Mary Sues (though generally not cool, as I’ve opined upon previously), but at least other writers made them do things and gave them personalities. Joanna McCoy deserves a much better story. This one is full of good ideas gone to waste and bad ones explored at too great length—just a big ole honkin’ mess.

Now if you’ll excuse me, I have to drive my Kia Soul to Target for some DiGiorno Pizza and Dr Pepper, which I will purchase with my Visa card.

I give Crisis on Centaurus 1 out of 5 issues of National Cosmographic. Star Trek can be a lot of things. It can be silly, intentionally or not. It can be problematic, but that’s often just a reflection of the less enlightened times in which a given Trek work was written. It can be oversexed, but that’s just one interpretation of a legendary pop-culture friendship. But for me, there’s no lower low for Star Trek than when it makes me say, “This is stupid.” Crisis on Centaurus is just stupid. Deeply, deeply stupid.

NEXT TIME: We sound the trumpets of war for Diane Carey’s Dreadnought!