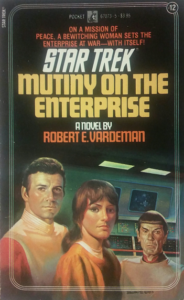 Well, it’s the first review of the new year, and we here at Deep Space Spines wish you the best of luck in sticking to your resolutions and working toward being the best “you” that you can be. I may be biased, but if you’re looking for ideals to guide you on your path, you can do a lot worse than to copy Star Trek. I just hope that for you and yours, 2018 turns out to be more Yesterday’s Son and not so much Mutiny on the Enterprise.

Remember that wacky planet with the paper-thin people that the Enterprise got diverted from at the beginning of The Klingon Gambit? The one that sounded way more interesting than what actually ended up happening? Well, that mission is over, and everything cool and fun happened off-screen. Boy, I sure hope they had a good time. I guess we’ll just have to take Vardeman’s word for it! But before Kirk can say “shore leave”, Admiral McKenna says nope, you don’t even get to dry-dock, you’re gonna get your butt back out there and escort Ambassador Zarv to the planet Ammdon so he can stop war from breaking out between Ammdon and Jurnamoria. Kirk protests, but Enterprise is the least banged-up ship in the fleet, so they get the gig by default. McKenna tries to apologize, but Kirk is too upset to hear it, and the book has already gone out of its way to make McKenna sound like an ogre anyway, so. (I wasn’t aware having “her hair pulled back in a severe style that did nothing to enhance her looks” is supposed to have any impact on how she does her job.)

Zarv is a Tellarite, not to mention super bossy and obnoxious, but he’s also apparently an amazing diplomat—not that you’ll ever see him in action, because Vardeman can sketch out characters but isn’t a good enough writer to give them anything interesting to say or do. He’s joined by Donald Lorritson, his young, foppish chief attaché, and Mek Jokkor, an agriculture expert and Groot-alike whose name is a first-ballot candidate for the Sounds Like He Belongs in Star Wars Instead Hall of Fame.

Well, obviously she’s bad news bears. What do you think, Kirk? … Give her unrestricted access to almost every area of the ship? Whatever you say, cap’n!

For the third book in a row, we have Romulans to worry about. Ammdon and Jurnamoria border the Romulan Empire, and they’re both primitive enough and distant enough from the Federation that conquering them would be a low-risk/high-reward venture. Establishing peace and getting them both on the Federation’s side is a big deal. But only Ammdon has a mutual defense treaty with the Federation, and Lorelei warns that they’ll use the Enterprise’s presence to justify attacking Jurnamoria. I’m thinking of the number of shits Kirk should give about the opinion of some waif they just peeled off the wreckage of an abandoned ship. Hint: it’s less than one. And yet, the rest of the crew seems to think her pacifistic approach is a splendid idea. She must be quite persuasive. Perhaps even alien-power-enhancedly so.

Spock posits exactly that. So what would a reasonable person do with that information? Confine her to an isolation cell? Dump her on a peaceful planet with a comfy climate? One thing I’m pretty sure no one with half a brain would do is set up a debate between Lorelei and Zarv, broadcast it throughout the entire ship, and let everyone decide whose argument is more compelling. “Why am I supposed to debate with, of all things, that emaciated wisp of a child? What do you use your brains for besides space dust?” Zarv demands to know. That makes two of us.

The debate commences, but no one actually says anything, because Vardeman glosses over it with roughly one dialogue-less paragraph per character neatly summarizing not even so much their words as the emotion with which they speak. Vardeman does this sort of thing consistently throughout the book, and it irks the crap out of me. He can only tell you what characters are like, or write blocks of exposition about how they feel or what they do. He can’t supply them with dialogue that lets them speak for themselves or gives us an adequate window to people’s motivations, which is partly an implicit admission that this dumb debate shouldn’t be happening in the first place, but mostly just gets at the simple truth that Vardeman isn’t a good writer. 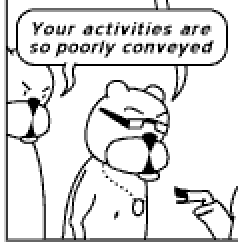 The entire crew is becoming increasingly restless and insubordinate, ignoring orders and abandoning their posts. Kirk thinks the negotiating team’s presence and attitude are what’s cratering morale, because he’s drinking idiot juice by the gallon today, but there’s no time to hassle them about it, because thank goodness, they found an inhabited planet where they can get materials for radiation shielding and fix their ship without dry-docking at a starbase. 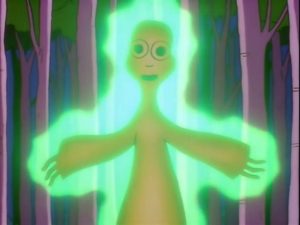 Spock, Bones, and a security detail beam down hoping to secure the goods. They meet hairless aliens with large eyes and no ears (pictured, right). Since they’re deaf and don’t seem interested in communication, Spock tries to mind meld, but gets knocked flat on his tuchus, and they all get captured. Zarv demands to beam his team down and use his black belt in diplomacy to retrieve them; Kirk says no, but they beam down anyway and also get laid out (Mek Jokkor even dies). Lorelei, now spouting some bushwah about “the True Path”, phasers Kirk and exiles him to the planet.

Kirk gets everyone out of their holding cell and back onto the Enterprise, though not before all the ambassadors are killed, and finally does, by his own stupid moron admission, what he should have done in the first place: he locks up Lorelei and develops some high-tech earplugs that will dampen her most persuasive frequency waves. But without his ambassadorial Three Musketeers, how will Kirk negotiate peace between Ammdon and Jurnamoria? Easy: he just puts the delegates in a room with Lorelei and points her weaponized pacifism at them, and before long, they’re all spirally-eyed and gibbering about the True Path. (She converts them so hard, they even want to bone each other.)

Does it matter that Lorelei isn’t a Federation employee? Who cares, they’ll make up a title for her. What if, as the book implies she very well might, Lorelei uses this ambassadorial post as an avenue to turn the rest of the Federation on to the True Path? Let the diplomats sort it out! Caring about that is above Kirk’s pay grade. It’s an appropriately sloppy end to a rancid ham of a novel.

Pictured: Kirk at the end of this book (left); actual result (right)

“James,” Lorelei said, her voice low, a vibrancy about it that reached into his soul and tugged. “You endanger your ship, your crew and the lives of people on two planets. Do not carry through with your orders. Return to Starbase One.

“Lorelei, I can’t,” he managed to say. She lowered her head, nodded, then left his quarters. He felt as if he’d just accidentally set his cat on fire.

I will give ten dollars to anyone who can make even a molecule of sense of that simile.

Even from the worst Trek novels, I expect a baseline of competence, and while some have been truly rotten indeed, Mutiny comes the closest to not even achieving that bare minimum. Kirk especially is in rare form here. He does incredibly stupid things, other people try to tell him those things are stupid, and he realizes about fifty pages later that the things he did were in fact stupid. Vardeman is a prolific sci-fi author, still producing work to this very day, but this book marks the end of his involvement with Star Trek, and thank Baby Jesus for it.

NEXT TIME: The Wounded Sky