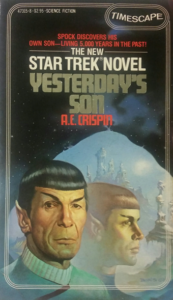 Another Star Trek novel opens with yet another fawning introduction by a figure of some import within the community. This time, it’s written by Howard Weinstein, still fairly fresh off his own pretty decent Trek book, The Covenant of the Crown. I’ve previously pontificated on the questionable utility of these obnoxiously obsequious prefaces, but in Ann Crispin, Weinstein is fortunate enough to finally have a subject on whom such words aren’t wasted.

Spock and McCoy are playing chess on the rec deck when an ensign approaches Spock and shows him a picture of a cave painting from Sarpeidon in the Beta Niobe system. The cave painting depicts a person who looks awfully Vulcan, which to the ensign is weird, because Vulcans hadn’t colonized that far out into the galaxy during Sarpeidon’s ice age, right? Spock immediately groks the implication of what the ensign has shown him and is so rattled by it that he arrives ONE FULL MINUTE late for bridge duty, a sure sign to Kirk that something is very rotten in the state of Vulcan.

Spock is so distressed he’s leaking telepathic projections onto Kirk, so he finally relents and admits he conceived a son with Zarabeth during the events of “All Our Yesterdays”. Something in the atavachron sent Spock back 5000 years not just temporally but mentally as well; while stuck in the ice age, he ate meat, fell in love, and got laid, which, as you may have noted, are not activities Vulcans typically partake of. (Nothing of the sort happened to McCoy, as I recall, unless the difference between humans of the 23rd century and 5000 years prior is negligible, which, if so, isn’t that a fine how-do-you-do of an editorial on our species.)

Kirk allows Spock to seek permission from T’Pau to use the Guardian of Forever to retrieve his son, on the condition that he gets to accompany his friend. Spock gets clearance for three, assuming (correctly) McCoy will somehow finagle his way into the action, and the adventure is afoot.

Eventually, they find the Vulcan, whose name is Zar. Zarabeth died seven years prior when she fell into a crevasse, so Zar has been alone for quite some time, though he’s remarkably well-adjusted, considering. He definitely favors Spock in the looks department, and despite being only a quarter Vulcan, he has some nifty extra talents Spock doesn’t have, like the ability to “feel fear” at an enemy—i.e., to displace his own fear and anger onto his attacker’s mind. If your Chekhov’s Gun radar started beeping when you read that, you’re not alone, but it’s a false alarm—the story swaps it out midway through for a more generic “I can sense when people die or are nearby” power. Foreshadowing is one of the few areas where this book drops the ball (see also Nuggets below), although I won’t dock it too hard, since it has a sequel where certain things unused here may yet manifest.

Spock expects Zar to get educated and acclimated to Vulcan customs, and has a strict regimen ready to go. But their fundamental differences quickly cause tension: Spock is brusque, mathematical, and logical, whereas Zar is warm, artistic, and emotional. Zar wears his frustration on his sleeve, causing him to mortally offend Spock on more than one occasion. While learning how to connect mentally, Zar tries to force a mind meld on Spock, which is “regarded as a heinous crime” on Vulcan. Later, Spock asks Zar to create a diversion, which Zar interprets as “slash the crap out of a guard’s throat”. In a particularly savage (if immature) display of mockery, Zar, embarrassed by Spock’s rapid-fire quizzing in the mess hall, sarcastically says “Fascinating” and shoves an Arby’s Meat Mountain into his (Zar’s) face.

Zar resents Spock for not being the father Zarabeth talked up and for retrieving him seemingly only out of a sense of duty, and Spock feels shame at the disservice done to Zar by the circumstances surrounding his birth. But a reckoning is imminent: the Enterprise is a military ship, and Zar, a civilian, can’t just hang around on it forever. Plus, Romulans are on the way to the Guardian of Forever, and they don’t know what it is or how it works, but they’ll either figure it out or blow it up. Can Spock and Zar patch up their relationship in time to help neutralize the incipient Romulan threat?

Yesterday’s Son is the first STPB that is a direct sequel to an episode of the television series, and given how good it is, you have to wonder what took so long. On one hand, it’s admirable that all the non-novelization books to this point have told fully original stories, but the results have been wildly inconsistent. It’s possible that basing a book on an episode could have been perceived as “too easy”, perhaps a bit too obvious a layup. But a layup is exactly what the STPB universe needed at this point. Duds like Black Fire had fans out for blood, calling for boycotts of the novelverse on the floors of convention halls and in the pages of fanzines. Yesterday’s Son takes real and solid established lore and expands on it in a bracing and exciting way, giving us my first unequivocal recommend since The Entropy Effect.

I hope you all got your permission slips signed, because this book is going to take you on a feels trip. Yesterday’s Son is the first STPB to feature multiple scenes of significant emotional heft, perhaps none more so than the eulogy and cremation of Zarabeth. Zar has kept her body preserved—fairly easy, considering how cold his environment is—and agrees to allow the trio to cremate her using their phasers. Kirk offers some brief sentiments that are actually pretty nice for being so raw and off the cuff, but it’s Spock who gets the gut-punch line: “She was all the warmth in this world.” Spock has some regrets about the way he behaved while under the influence of the atavachron, but that doesn’t mean his love for Zarabeth wasn’t real, and Crispin confirms it in perhaps the most poetic way possible.

Roger Ebert once spoke of a concept called Elevation, a heightened state I’ve always experienced as acutely feeling the emotional heft of a scene or a character action in a way that recalls the sensation of getting teary-eyed but stops just short of full-on crying. I felt Elevated several times while reading Yesterday’s Son, then marveled as I realized how many books back I’d have to go to find one that produced comparable feelings (the scene in Covenant of the Crown when Spock and McCoy are looking at the mountain scenery). Similar to how you sometimes don’t realize how hungry you were until you eat, you don’t realize what a wasteland you were trudging through until you get to an oasis like Yesterday’s Son.

Crispin also really nails the interplay between crew members, especially the main three. Marshak and Culbreath spent two entire books bloviating about the legendary rapport of the Enterprise crew, yet they never rendered that rapport as deftly or evocatively as Ann Crispin managed in just a few scenes in the mess hall and on Sarpeidon. Conversations feel smooth and unforced, and you actually get the sense these people like being around each other. An early mess hall interaction where Uhura and Scotty are planning a production of H.M.S. Pinafore evokes the sort of sensation that good media can produce, where you feel like you’re hanging out with friends when you get cozy with the characters (like when you listen to a podcast you really enjoy).

As for Zar, even though his psionic abilities are inconsistently defined and applied and his immature behavior can be bewildering and frustrating even to human observers, he’s a three-dimensional character with sound motivations who easily earns sympathy and good will. We’ll see more of him in Time for Yesterday, and based on how this book went, I look forward to seeing Zar again and seeing what he’s been up to in the interim, and I have high expectations for the sequel’s quality.

It’s been too long since we came upon a Star Trek novel that offered something reasonably close to the complete package: natural camaraderie among the crew, a keen eye for logical speculation on the consequences of the crew’s actions in past episodes, and a tight understanding of all the other little intangibles that make Star Trek tick. Sequels to television episodes, when handled with caution and reverence, make for some of the best extra-canonical Trek reading, and Yesterday’s Son was the first example and still a prime one.

NEXT TIME: Mutiny on the Enterprise