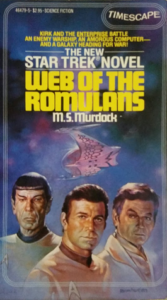 If you were to ask a fan of Star Trek what Star Trek is “about”, there are some standard answers you’d probably get. I personally would say it’s about tackling the Big Questions and solving problems through reason, diplomacy, intellect, and non-violence. Last week’s book, Triangle, certainly checked those boxes. Whatever flaws their stories may possess, no one can accuse Marshak and Culbreath of shying away from the Really Big Questions. But sometimes, Star Trek is about dumb crap like the Enterprise computer falling in love with Captain Kirk, and that’s peachy too.

Web of the Romulans
Author: M.S. Murdock
Pages: 220
Published: June 1983
Timeline: Early season 1 (not long after “Tomorrow Is Yesterday” but before “Space Seed”)
Prerequisites: None

Web of the Romulans is yet another story by a one-timer, Melinda Seabrooke (M.S.) Murdock. Aside from her only Star Trek novel, she would later write a trilogy set in the Buck Rogers universe as well as an original space opera duology. She adapted the computer subplot from her own 1979 fanfic “My Own True Love”, which had been published in a one-off fanzine called Dilithium Crystals. Murdock’s own title for the book was We Who Are About to Die, which is about fifty times more badass than what it ended up being, and not just because the final title sounds too similar to “The Tholian Web”. There’s no actual web in Web of the Romulans, other than of course the one that is tangled that we all weave.

The story actually begins from a non-Enterprise perspective. A Romulan named S’Talon is selected by the nameless Praetor for a high risk/high reward mission, and after S’Talon leaves, the Praetor tells his slimy nephew Livius to spy on him and report on his actions. The Praetor doesn’t like either one of them—S’Talon because he’s so noble and genuine and only cares about the good of the Empire, and his nephew because he’s a hotheaded ding-dong. S’Talon can’t reveal the nature of his mission to anyone, but he has loyal friends and confidants in his centurion S’Tarleya and an old man named Tiercellus, who is ex-military but talks more like a seer.

Aboard the Enterprise, matters are rather less grave. The engineers at Starbase Eight have installed personality subroutines on the ship’s computer, the only apparent reason being they thought the old computer was boring and the new one is more amusing. This seems exceptionally unprofessional—I know I’d be asking for someone’s manager—but they argue it’s fine since it won’t impact the computer’s efficiency, and Commodore Yang Li is inclined to agree. Yang seems like he’s gearing up to be yet another stubborn bureaucrat, but he actually has a lot of sympathy for Kirk’s straitened circumstances and shows genuine confidence in the captain. Fortunately, his appearance isn’t restricted to these early pages. This book doesn’t want for likable OCs, but ones above the rank of captain are elusive beasts indeed, and Yang’s rationality and faith in Kirk and the Enterprise act as a much-needed counter-salve to the absurdity of the character I’d consider this book’s primary villain.

S’Talon and his Bird of Prey cross the Neutral Zone border, meet the Enterprise head-on, and turn on their cloaking device, initiating a stare-down that lasts the entirety of the next six chapters. S’Talon waits patiently to make a move while most of his crew practically claw their eyeballs out waiting to either mutiny or open fire. As much as Kirk would like to take credit for being a master tactician, he’s mostly just trying to convince the computer to get its act together before the Romulans catch on that there’s something seriously wrong with the Enterprise and it causes them all to get blown to smithereens.

Countess, as the computer now demands to be called, starts bricking key systems, deleting personnel files—first of women, then of everyone who isn’t Kirk—giving crew members files they didn’t request, stranding them on turbolifts, etc. Spock deduces that the computer is madly in love with Kirk, Kirk lays on the sweet talk with a thickness typically reserved for green alien women, and the computer abruptly ends its shenanigans (which are never spoken of again) just in time for everyone to get down to auxiliary control, whip the ship around to the rear of the Romulan Bird of Prey, and completely cripple it. The Starbase Eight engineers were stupid and wrong and will receive no punishment for their “cute” stunt that nearly got the Enterprise annihilated.

Kirk spares S’Talon and his centurion and learns that their six-chapter stare-down was intended to distract them while the rest of the Romulan fleet crossed the Neutral Zone border and went to the planet Canara to clean them out of their supply of a grain that will cure a virus called myrruthesia that is crippling the Empire. If you read the synopsis on the back of the book, you immediately know the Romulans are suffering from a virus, but Canara isn’t even mentioned until two-thirds of the way through the book, and the virus is a similarly slow-burning revelation. The fact that they seem to be crossing the Neutral Zone with non-militaristic intent has everyone stumped, but their pride keeps them from revealing their true purpose too early. I haven’t really thought too much about those back-cover synopses, but this one really wrecks the flow, as you keep anticipating something that feels like it should be a much more prominent part of the story.

All the while, Admiral Iota is rarin’ to blow up some Romulans, and Commodore Yang and his colleagues in the admiralty have to figure out how to stop him from declaring intergalactic war. In the absence of subspace communication from the Enterprise, Iota immediately jumps to the totally unfounded conclusion that the Enterprise is lost, therefore they need to start vaporizing Romulans. Once the computer subplot “resolves”, most of the rest of the book is spent trying to get him out of the auxiliary control room of the USS Potemkin where he’s holed up and keeping him from screwing up a very delicate situation.

Web‘s villains are uniformly its weakest aspect. Iota is the most baffling of all, a total cipher with only the vaguest backstory whose hate-on for Romulans is so inexplicable and insufficiently motivated that you’re forced to conclude he’s just plain racist, which further raises the question: how did this guy get to be the head of Starfleet Intelligence? Yang and the other commodores and admirals admit they have no idea what stoked Iota’s interest in Romulan culture—none of his friends were ever killed by Romulans, he never lived anywhere they invaded, etc. The most tangible fact about him is that he has a natural gift for espionage that helped him shoot straight to the top of the organization. Someone as nakedly paranoid and evil as Iota might have been inconceivably cartoonish around the time this book was published, but unfortunately, living in America in 2017 has made the rapid ascendancy of such a character a lot more plausible and sadly less surprising. Elsewhere, Livius is a scheming, sniveling sleaze but dies unceremoniously off-screen, and the Praetor turns out to be not only full of hubris but a risibly awful negotiator and a huge idiot.

Web also has the messiest timeline errors of any STPB to date. The Enterprise’s specific computer issues place it immediately after “Tomorrow Is Yesterday”, from season one, in which the computer calls Kirk “dear” at one point. The events of “Balance of Terror” had recently occurred, but those of “The Enterprise Incident”, which is also referenced, had not, nor those of “The Gamesters of Triskelion”. Chekov also appears regularly throughout the book as a member of the bridge crew, which he wasn’t during the first season of the show (i.e., the first year of the five-year mission), though depending on what you believe, he may still have been aboard the ship serving in some capacity. I usually learn about timeline goofs after the fact, so I consider them pretty egregious if I’m noticing them as I read.

While Web of the Romulans is a hot mess, its attempts at expanding what we know of Romulan society are decent for the time. Romulans are considered one of the staple villains of TOS, but it’s easy to forget that they only appeared in two of the series’s 79 episodes, so there are plenty of nitty-gritty aspects of their culture that are ripe for interpretation. Other than her choice to depict them as a resource-poor society that a disaster of the virus’s magnitude could bring to total ruin within just a few solar years, Murdock portrays their dynamics more or less in line with what you might expect. She does imbue S’Talon and S’Tarleya with some well-drawn humanity, and though the level of Romulan peace and cooperation achieved by the end seems a bit lofty for a standalone story, it doesn’t feel unearned. Of course, we’re not far away from the beginning of one of the most well-regarded depictions of Romulans in Trek literature, but it would be hard for anyone to top Diane Duane.

Web of the Romulans in many ways falls short as badly as any in the recent run of books, and yet I had a certain amount of fun with it that I didn’t have with recent previous installments. It’s certainly a load off from the unremitting navel-gazing of Triangle and the raw undiluted insanity of Black Fire, and in spite of everything, its more outstanding mistakes somehow feel eminently forgivable. For her only outing, Melinda Murdock didn’t do an awful job. It’s just too bad she didn’t have a better editor reining her in.

This story has a number of deep fundamental problems, but its winsome attitude and spunk help smooth over them quite a bit. I’d give it a mild recommend to those who don’t mind solid character work coming at the expense of things making sense; as my perhaps overly generous rating hopefully reflects, I’m one of those people. A more demanding reader would likely score this one lower. But as rough as most of these early books have been, I’m inclined to grade any that give me some form of pure enjoyment on a curve.