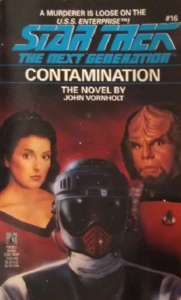 This week, Picard brings Worf and Troi together to solve the mystery of a suspicious death, but it’s not quite the match made in heaven it will be a few years from now. As the investigation drags on, Wesley becomes the boy who knew too much, Beverly becomes the mother who knew too little, and Data gets a turn on the other side of the witness stand. Have the Kreel calmed down enough to gain Federation support? Has Worf overstepped a critical parental boundary? Have I finally become good at solving detective stories? All this and more in Contamination, a book that quite aptly could use a significant clean-up.

Worf is, in the aggregate, not really that great a security chief or dad (or even, arguably, that great a Klingon). So it stands to reason that he isn’t that great a detective or prosecutor, either. Contamination isn’t just another entry for the Hall of Lame Star Trek Whodunit Books, it’s a first-ballot inductee.

Dr. Lynn Costa is an emotional wreck. Her husband Emil wants to retire back to Earth, she feels her marriage slipping away from her, and she thinks someone is trying to kill her. Troi can’t calm her down, but thinks some R & R on a new starbase the Enterprise is en route to might ameliorate some of their marital woes. But as they say, you aren’t paranoid if it actually happens, and after Troi has a vivid dream where she’s wearing some kind of space suit and dies from a gas leak, Dr. Crusher calls her to tell her Lynn Costa has died in pretty much that exact fashion.

With all signs from the scene pointing to murder most foul, Picard puts Worf and Troi together on the subsequent murder investigation. Troi isn’t too thrilled—she still has some residual beef with Worf for suggesting that she abort Ian, but resolves to remain professional nonetheless. I’m going to guess that when you think of Worf and Troi as a duo, you more than likely think of them getting together right around the time Next Generation was wrapping up. But at the time, this would have been a fairly novel pairing. They don’t actually work much in concert, particularly in the back half of the book, but points for being the first to the idea.

Contamination—much like The Vulcan Academy Murders, to cite one example—is one of those whodunits you can easily solve by zeroing in on the suspect the investigator(s) is/are ignoring the most. Once you’ve resolved that, the finer details are largely irrelevant; you’re just left waiting to see how the conclusion you saw coming a mile away plays out. In this book, that point comes distressingly early, and there’s no real uptick in activity until Worf enlists Wesley Crusher.

After a round of fruitless interrogations, Worf assigns Wes to an undercover gig. Emil used to tutor Wes, and Worf wants him to get back in his good graces and dig up dirt, without getting in too much trouble if he can help it. Naturally, Wes finds plenty of trouble, running afoul of Emil’s not-so-gentle giant assistant, narrowly eluding him with an intraship-beam assist from O’Brien, eavesdropping on Emil and Karn Milu (the ship’s other Betazoid, the standoffish scientist in charge of the Microcontamination project), getting caught, and getting thrown in an airtight pod and left to suffocate.

This is all well and good, at least theoretically. Wesley Crusher is on track for a career in Starfleet (at this point, anyway), where he’ll face no shortage of danger. And he’s already gotten a few tastes of it just being on the Enterprise. But there’s one big problem: Worf completely sidesteps Beverly, assigns Wes this big job directly, and tells him not to tell anyone, including her. Sometime around the point where Wes was slowly losing oxygen in the research pod, I asked myself, “Wait. Where the heck is his mother in all this?” She does finally appear, and she does get mad at Worf, as you might expect, for treating her only son like one of his redshirts … for, like, half a page. And then she moves on. On top of that, Deanna later assures Wes that he was right not to compromise his secret assignment by telling his mom about it. It’s just a huge mess that never sits right.

Contamination does do some things right, however. At this point, there’s almost no continuity between books that aren’t written by the same author. This book, though, expands on the Kreel, first introduced in Peter David’s Strike Zone. They’ve had a few slices of humble pie since the last time we saw them, and they’re (mostly) ready to accept that there are things and technologies they have to learn on their own and can’t just purchase instant knowledge of. They’re far from perfect, but they’re growing, and that growth is developed with a sure hand. It also helps that Kwalrak, the lone female Kreel depicted, is such an entertaining character, lasciviously pursuing an uninterested but patient Riker and stepping up to a stronger role in the court scenes when her male superior proves unable to behave himself.

Data and Worf also make for humorous opponents in the book’s climactic courtroom showdown. But their performance and the Kreel’s journey toward Federation acceptance unfortunately aren’t enough to lift this book out of the deep, deep mire it finds itself up to its neck in. Worf and Troi constantly miss clues that seem important and blow off characters you’re screaming in your brain are up to no good. By the end, I was equally eager to both return it to the bookshelf and pitch it into the wastebasket, and it’s only for the sake of a complete collection that I barely chose the former.

I give Contamination 1.5 out of 5 conspicuously placed blue vials. It’s not all bad, but its problems far outweigh its bright spots. Whodunits haven’t gone well for Star Trek to date, and this one is no exception, with a lot of questionable character behavior and a fair amount of sloppy editing to boot. If nothing else though, these books have finally made me, a renowned longtime moron, halfway decent at solving crime procedurals, albeit only by reasonable process of elimination and not putting together actual clues.

NEXT TIME: The Lost Years saga continues with A Flag Full of Stars