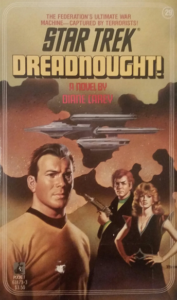 This week, we meet Lt. Piper, who knocks the socks off the Kobayashi Maru and proves that, while orange may indeed be the new black, black is the new (command) gold. Will Kirk’s confidence in her talents pay off? How many OCs paralleling the main cast is too many? By what percentage does an exclamation point in the title make the book more exciting? We’ll seek the answers to those questions and more as we review Dreadnought!, or, Two Warp Nacelles Is Company, Three’s a War.

Dreadnought!
Author: Diane Carey
Pages: 251
Published: July 1986
Timeline: After TOS
Prerequisites: None, although a refresher on “The Galileo Seven” (TOS S1E13) will flesh certain parts out a little more

We’re already in the thick of the action with Lt. Piper on page one, and it quickly becomes apparent she’s taking the Kobayashi Maru test. She goes hard in the paint, nearly overloading the simulator, and in the process getting closer to winning than anyone who didn’t cheat. Luckily for her, Kirk is watching from the peanut gallery, and her outstanding performance nabs her a Kirk-requested transfer from Captain Flynn’s Magellan to the Enterprise, much to the chagrin of her boyfriend Brian, who was really hoping to be assignment twinkies.

Piper meets her Enterprise bunkmates: Osira, the first Gorn in Starfleet, a character I wish had been a bigger part of the story (rather, that is to say, a part at all); Judd “Scanner” Sandage, a hybrid person with the skills of Scotty and the downhome country bonhomie of Bones; Dr. Merete AndrusTaurus; and Sarda, with whom Piper shares a Mysterious Past™. Sarda is a Vulcan with a knack for creating innovative weapons systems, which is roughly equivalent to a polar bear whose greatest talent is designing giant SUVs.

Kirk calls Piper to the bridge and asks her if she’s aware her Kobayashi Maru stunts are also known terrorist tactics. She got them from crappy YA novels but acknowledges she realizes that. So then why do the people who stole this giant new top-secret dreadnought have her biocode (i.e., they’ll only talk to the Enterprise if they can confirm Piper is aboard)? Explain that plate of deep-fried pickles, missy!

Enterprise meets the dreadnought, which is called Star Empire, at the rendezvous point, where it appears Klingons have torn it to shreds. Some almighty warship! Except that one’s a decoy; the real one comes out from behind a nebula and vaporizes the Klingons with ease. Turns out Star Empire has unprecedented image projection capabilities and can alter them on the fly. Now do a bunny rabbit! When the Enterprise hails Star Empire, Boyfriend Brian is onscreen. He immediately recognizes Piper, leading Kirk and Spock to immediately have her arrested for conspiring with terrorists, but she busts out of the brig with Sarda’s help, and the two set out for Star Empire to get to the bottom of the whole fine mess.

Like Dwellers in the Crucible not long before it, Dreadnought! uses original characters as Kirk and Spock stand-ins to explore the yin and yang of the human/Vulcan dynamic, though this time there’s also a pinch of notice-me-senpai wish fulfillment for good measure. Piper’s first real-world command scenario is a baptism by fire, and while she kicks butt and looks good doing it (in a non-regulation black jumpsuit accurately visualized by Boris Vallejo in one of his better covers), she’s never sure if she’s playing right into Kirk’s hands or committing career suicide. But she gets by with a little help from her friends, who so closely resemble half the main cast that if this were a TV episode, it would be instantly recognizable as a backdoor pilot.

The first thing you’re liable to notice about Dreadnought! is that it’s written in the first person. Though it’s kind of surprising this hasn’t happened before now, in a way it’s also not, because we’re sort of primed by default to follow and care about the exploits of the main crew, and because we became acquainted with them in television before literature, it’s more comfortable for us to hear their stories from an omniscient perspective than to hear them tell it. So it’s a major credit to Carey’s talents that this doesn’t hurt the narrative by coming across as too bizarre or golly-gee-whiz. Like, wouldn’t it be ka-ray-zee to get assigned to the Enterprise and work with Captain Kirk on your very first mission?? Thankfully, it succeeds on the strength of the original intent, by adding a potent extra dose of immediacy to the proceedings and giving itself something you can immediately point to that separates it from the herd.

Our villain this week is so-so: Vice-Admiral Rittenhouse, who’s nuttier than a squirrel turd. Rittenhouse regularly calls Paul Burch, the timid desk jockey who somehow found the cojones to steal and command the stolen dreadnought, “sociopathic” or “maniacal” or “mentally unstable”. Methinks the dreadnought isn’t the only thing in this story with well-developed powers of projection, if you catch my drift. In fact, he’s one of those insane Starfleet officials who’s so nakedly corrupt that you wonder how the battery of psychological exams he would had to have taken to reach that level could have missed it. Rittenhouse’s plan is essentially to exploit people’s fears and prejudices and then make them key members of his staff so that a bunch of people have his back when he decides to throw rocks at the Klingons and start a galactic war. Classic evil dictator 101 type stuff.

Rittenhouse’s right-hand man Boma is a little more interesting. The name is a deep enough cut that it might not even ring a bell for diehard fans—I myself didn’t pick up on it until a subtle hint that he existed previously was dropped—so I gotta give Carey credit for a solid pull. (He’s the blue-shirt in “The Galileo Seven” that butts heads with Spock.) According to Dreadnought!, Scotty court-martialed Lt. Boma out of Starfleet after the events of “The Galileo Seven”, but despite the dishonorable discharge, he managed to find success in civilian life, getting involved in unethical science and developing the alloy that largely comprises the body of Star Empire. I wouldn’t say it’s necessary to rewatch the episode in this case, since it’s not going to wreck the story if you don’t remember Lt. Boma or how he acted toward Spock, but any little thing you can do to enrich these reading experiences will never hurt.

As I mull over what I’ve written here, I feel like I’m laying the hammer down on the book in a way that fails to reflect how much I actually enjoyed it, and so I feel like I should point out that it all does add up to something better than the sum of its component parts. Typically at a certain point, I’ll stop taking notes (mostly so I don’t later feel tempted to recap spoilers) and allow myself to get swept up in the story. That happened pretty quickly here. Dreadnought! is a breezy read, which is sometimes something that ends up biting a book in the butt when you realize that breeziness enabled you to gloss over some glaring problems, but thankfully it’s also very tight and well thought out—a solid freshman outing for an author we’re going to be seeing a lot of.

I give Dreadnought! 3.5 out of 5 third warp nacelles. Dreadnought! is one of those books that is so unglamorously workmanlike that I can’t think of much to say about it. I don’t mean that as an insult. It does a few things that are starting to wear a little thin, but it also tries a few new things and doesn’t fall on its face in the process, so it generally works out. This is just the first of many for Diane Carey. In just a few weeks, we’ll take on the sequel to Dreadnought!, the similarly exclamation-marked Battlestations!, and before you know it, we’ll be reading her event novels.

NEXT TIME: We run the voodoo down on J.M. Dillard’s Demons