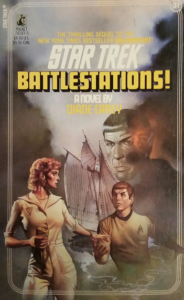 Hot on the heels of Diane Carey’s debut Trek novel Dreadnought! comes its sequel, the similarly exclamation-marked Battlestations!. A hot new (well, not totally new) technology has been stolen, and Piper’s friend and crewmate Sarda is the prime suspect. Can Piper clear his name, wrest the technology from the hands of those who would use it for evil, and save the day once again? And will she look as good doing all of it in her non-regulation khaki flight suit as she did in her non-regulation flared black jumper?

At the end of Dreadnought!, Kirk invited Piper to spend shore leave with him on his schooner, the Edith Keeler (not for *ahem* that, though I wouldn’t fault anyone’s mind for going straight to that), and that’s where she is at the beginning of Battlestations!. Playing intense nautical war games with Admiral Ben Shamirian and his boat, the Gavelan, she gets hit in the face with ocean spume while the reader gets hit in the face with dense nautical jargon that I won’t pretend to have even halfway understood.

A security detail beams in on their shore leave and lets Kirk know he’s wanted at Starfleet HQ for questioning—it seems Sarda has stolen a classified bit of major technology. For being rude enough to horn in unannounced, Piper kicks all their butts. Kirk and Scotty beam on ahead to San Francisco, while McCoy tags along with Piper and her friends as she makes her way to the island where Kirk has a ship of her very own waiting for her.

She finds the ship, an ugly hoopty of a construction tug called the Tyrannosaurus Rex (pictured below) that looks like if someone tried to model a starship after Trogdor. Piper re-christens it the Banana Republic, following in the tradition of such fine spacefaring vessels as the Gap, the Express, the Old Navy, and the Forever 21. On the way to San Francisco to bail Kirk out of his stupid inquiry for idiots, the ship lifts into orbit and enters warp all by itself, heading for a pre-programmed destination. Along the way, Piper and her team break into the allegedly unhackable autopilot, switch to manual control (to remind you, in case you’d forgotten, that Piper is the best of the best of the best), and head for the rendezvous point on their own terms. 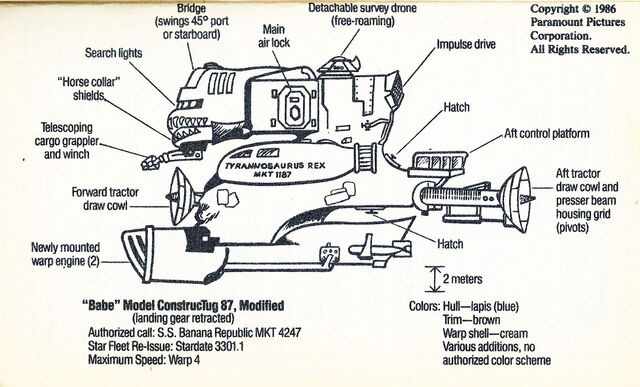 Banana Republic rendezvouses with Spock, who informs them that the stolen technology is in fact transwarp. Besides Sarda, the other implicated scientists are Dr. Boma, another Vulcan named Perren, and Ursula Mornay. Piper and Spock would both like to believe Sarda would never do such a thing, but alas: Spock set Sarda up with a tutoring gig with Perren—Sarda having been previously mentioned, recall, as being woefully behind in the Vulcan disciplines—and the mental bond between Vulcan teacher and student typically gets pretty tight, meaning Perren may very well be influencing Sarda into doing things he wouldn’t ordinarily do.

Mornay is the primary antagonist among the four. Her plan, such as it is, is to auction transwarp off to the highest bidder and skip town during the ensuing cosmic scramble. She’s basically Rittenhouse II, i.e., a person who has achieved a vaunted status yet would crumble if subjected to even the most cursory psychological exam, and naturally has gone way off the deep end thinking she can whip the galaxy into shape via brute force. The book even explicitly compares her to Rittenhouse on multiple occasions (e.g., p. 155: “‘You sound like Rittenhouse,’ I accused”). Aside from her being a scientist as opposed to a Starfleet admiral, there is functionally no difference between her and Rittenhouse. She doesn’t have any noteworthy extra angles, and she’s not a very compelling villain. To her credit, Carey seems to have realized this, because most of the villain focus goes toward Perren as Piper attempts to get him to turn face.

As she did in her previous story, Piper spends the bulk of Battlestations! asking herself WWKD as she tries to pick up what chessmaster Kirk is laying down for her. The main new wrinkle in Battlestations! is that that she now commands a ship, and thus has to face the music of everything that goes with that: gaining her crew’s respect, becoming one with her vessel, etc. Stakes are higher now, things are more real; Piper has to learn, often the hard way, that heavy lies the head that wears the crown. I personally liken it to a sort of Enterprise: The First Adventure Lite. (Scanner in particular is pretty harsh to Piper on multiple occasions, showing a stark lack of respect that I don’t recall manifesting in any significant way in Dreadnought!, and which occasionally feels distinctly as though he would never dream of talking that way to a male Academy graduate.)

Battlestations! both benefits from and suffers from being so incredibly similar to Dreadnought!. A lot of that probably comes down to the two books being released within four months of each other—a pretty astounding turnaround considering how long some previous manuscripts took to get published. According to Voyages of Imagination, Diane Carey wrote Battlestations! in six weeks after Pocket Books fell in love with the manuscript for Dreadnought! and wanted more. On one hand, Dreadnought! was pretty good, so making more of things that are good sounds like Making Money 101 with Professor Obvious. And there’s much to recommend not fixing what isn’t broken. Battlestations! is as briskly efficient in the storytelling department as its predecessor, and its continuity is strengthened by the close release.

However, that sameness also breeds some flaws that might have been less noticeable, like some of what’s described above, had there not been such an eagerness to get the next installment out the door in a hurry and it had had some time to marinate. Also, to clear the way for the exploits of Piper, some characters necessarily have to get the short shrift, and you know who the first ones are to get the boot when your original characters start taking center stage: your Sulus, Uhuras, Chekovs, etc. I feel like at this point we should be getting compelling plots and subplots for secondary senior bridge officers (and perhaps even some tertiary characters) at least semi-regularly, yet here we’re stuck with basically two Kirks, three Spocks, two McCoys, and two Scottys—a glut of redundancies.

Alas, this is Piper’s story, and at this point in the Deep Space Spines project you’re either strapped in for the ride or you’re not. Fortunately, for the time being, she has still enough gas in the tank to carry another solid if not spectacular adventure. I suspect Piper’s days as the primary protagonist of a book have drawn to a close with this installment, and not a moment too soon—the character would start to become really tiresome in another book or two. We’ll soon reach event novels by Diane Carey, so she obviously has some versatility that kept her from succumbing to the fate of, say, Marshak & Culbreath. And while Battlestations! was by no means bad, I’m ready to see some of that versatility.

I give Battlestations! 3 out of 5 impounded schooners. It’s pretty much second verse, same as the first, with slightly diminishing returns. It’s probably better if you haven’t read Dreadnought!, but you have to have read Dreadnought! for anything in Battlestations! to matter (though not necessarily to make sense, if that makes sense). While I doubt we’ve seen the last of Piper in incidental appearances, I hope subsequent Carey novels are ready to explore other characters and scenarios.

NEXT TIME: Double dumbass on you if you miss out on Star Trek IV: The Voyage Home