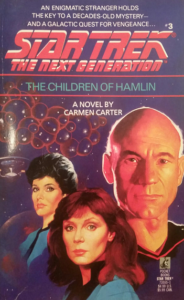 This week, when the Enterprise answers a distress call, the attackers, a race called the Choraii, turn out to be the culprits behind one of the Federation’s worst massacres on record. They pick up an ambassador and his mysterious attaché, who can communicate with the Choraii via the almighty yazz flute. Now the crew has to carefully navigate the music of the spheres, and if they don’t C♯, they’ll B♭. Meanwhile, a band of farmers is on hand to complain about technology and flight delays. Is the group that shuns technology also too good for vowels? Which side of the sickbay bed did Dr. Crusher wake up on? How much of a bonus does an author get for including a saucer separation in their book? It’s The Children of Hamlin, the book that happens when a Jethro Tull album and a bottle of Mr. Bubble love each other very much.

When Captain Picard responds to the automated distress signal of the USS Ferrel, he finds a can of worms in mid-opening. The Ferrel is being buffeted by a strange alien ship, but the Enterprise lures the aliens’ attention onto itself and soon enough sends them running. What they’re left with is a crew at odds—the Ferrel of course has its captain, but an ambassador, Andrew Deelor, and his aide Ruthe seem to be running the show—and a whole lot of questions, like why is a Constellation-class starship running with a skeleton crew? and why is no one allowed to talk about their mission? and why is there no record of an Andrew Deelor in Starfleet whatsoever?

The aliens responsible for the attack are identified as the Choraii, a name that rings unpleasant bells for pretty much everyone who wears a Starfleet uniform.1For a full three-quarters of the book, I thought a goof had slipped by the editing department and that they had reused the name of the aliens from Howard Weinstein’s Deep Domain (TOS #33), until I actually looked it up and realized the race I was thinking of was called the Chorymi. Boy, was my face red! (Not really.) The Choraii previously instigated a catastrophe known as the Hamlin Massacre, in which they attacked a colony, killed all the adults, and abducted all the children. Deelor and Ruthe have orders to recover as many of the survivors as possible, which sounds enough like a good thing, but turns out to be a good sight more complicated than it seems on the face of it.

Most of the hard work lies in getting Ruthe to do absolutely anything at all. She’s the only one who can communicate harmoniously with the Choraii, via the melodies of her three-piece flute, and Ruthe does what Ruthe wants when Ruthe wants. At first Picard thinks Riker might be able to work a little of that Angel One magic on her, since he plays trombone, but that quickly proves to be a dead-end. She’s reticent to help, but is finally convinced to, and ends up procuring one survivor in exchange for ten pounds of lead. The survivor turns out to be a baby, which brings into sharp relief just how long ago the Hamlin massacre actually happened. But as the Enterprise pulls away, Data detects another “child” aboard the Choraii ship—this one being one of the original hostages, now an adult. Ruthe absolutely refuses to help out this time, so they have to get by with their vocal cords, which the Choraii find grating and discordant, but Deelor has his orders. The Choraii, just wanting to be left alone, relent and hand over the survivor, named Jason.

Eventually, it’s revealed Ruthe was herself one of the survivors of the original Hamlin massacre, and that adults recovered in this way tend to die from the emotional stress of readjusting.2It’s never addressed why and how Ruthe managed not to succumb to that fate. Had this been a later TNG story, I imagine Picard would have made more of an effort to keep Jason with the Choraii despite Deelor’s orders. The Choraii exchange humans as tokens of trust and friendship, but treat them very well and give them lives of relative luxury (or at least, as luxurious as living in a liquid bubble ship can get), so even though they vaporized a colony just for a few common metals, it’s not like they continued to mistreat the children. It’s a sticky wicket, yet over and over it gets railroaded by a blunt insistence on saving the children at any cost, which is really more of a TOS attitude.

Meanwhile, over in the B-plot, a group known as the Oregonian Farmers are being chauffeured by the Enterprise to their new colony New Oregon, having worn out their welcome at the local starbase. While they appreciate the ride, they take every opportunity to complain about the technology that’s allowing them to sustain their way of life while in transit. But one of the leaders’ sons, Dnnys3Pronounced “Dennis”. Several of the younger Oregonians have names consisting exclusively of consonants. Apparently, even in a post-scarcity society, vowels are still held at a premium., is getting a taste for engineering, and he likes it. Wesley makes friends with Dnnys and tries to encourage Dnnys’s gift, but the elders of his colony struggle to accept it.

Carmen Carter was previously responsible for the execrable Dreams of the Raven, which mostly wound up being a protracted excuse for her author stand-in to make out with Dr. McCoy. With The Children of Hamlin, she reaps minor benefits from being able to work with a different cast that at the time didn’t have much going for them that could be too irreversibly screwed up or blasphemed against. It seems like she might have more of a natural talent for writing for the TNG crew, which is good, because all the rest of her upcoming stories are TNG, and one of them is an event novel.

One thing I thought ended up being a pretty smart move was pairing Wesley with a character of similar age. Freed of the burden of trying to force him into a seat at the grownups’ table, Wes is able to flourish and make a real, believable connection with Dnnys. I enjoyed the passages where the two of them hung out, and when their relationship became strained by the circumstances, I felt bad for Wes, which virtually never happens with season-one Wes, so, way to go, Carmen Carter.

But the two plots never dovetail except for the briefest of moments, so it often feels like you’re reading two different books, and not in the fun half-history half-present way, as with Spock’s World. There’s also somewhat of an over-reliance on the holodeck (it factors heavily into both plots), although that’s slightly understandable, given that at the time, it was a shiny new toy that was probably pretty tempting for writers to play with. Overall, The Children of Hamlin doesn’t leave much of an impression, though that still marks an improvement over Dreams of the Raven.

I give The Children of Hamlin 2.5 out of 5 flute pieces. While mostly unremarkable, it’s nevertheless an improvement over Dreams of the Raven, and in the tradition of season one TNG, it’s not as thoughtful about its subject matter as one would typically want/expect from Star Trek. It also features the least embarrassing out-of-character behavior by the TNG crew to date, so we also have the silver lining of authors figuring out how to write these characters appearing over the horizon.

NEXT TIME: Opening the gates for The Final Nexus