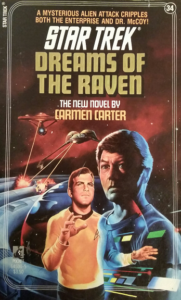 This week, we’re taking a look at Carmen Carter’s debut Dreams of the Raven, which is in fact a Star Trek novel and not a Sting album (I double-checked). The Enterprise answers a distress call that turns out to be a trap, and the stress of both the resulting casualties and a letter that dredges up some unpleasant feelings drives McCoy to drink. Before you know it, Bones falls down and breaks his crown, and the ship comes tumbling after. Will Kirk get back his trusted friend and adviser? How will the junior medical officer who is a highly conspicuous stand-in for the author fare in his place? And will we see this book in our dreams, or will we put it back on the shelf and say “Nevermore”?

Dreams of the Raven
Author: Carmen Carter
Pages: 255
Published: June 1987
Timeline: Between “The Empath” (TOS S3E12) and “The Mark of Gideon” (S3E17)
Prerequisites: None
Not to be confused with: Raven Dreams, a page of slash fic from Star Wars (in particular, The Phantom Menace), Gladiator, Highlander, and The X-Files, among other properties

While hanging out at a backwater trading post, Kirk learns of a Klingon attack on a race called the Frenni. He recalls the Frenni ship’s captain fondly from his time on the Farragut and hurries to render aid. Despite the familiar voice and the warm reminiscence, however, sensors show that whoever that is, it’s definitely not the Frenni captain. Kirk realizes he’s been sucked into a trap a split-second too late, and the Enterprise is crippled in a collision assault.

McCoy, frazzled and overworked from the subsequent sickbay load, receives the perfect cherry to top his poop sundae of a day: a letter from his ex-wife Jocelyn informing him she’s remarrying. McCoy takes solace in the bottle, and due to his dulled senses, he doesn’t catch the announcement of an impending gravity readjustment. When it happens, he gets thrown across the room and slams his head on the corner of his desk. Upon emerging from a coma, he believes he’s fallen off his horse in Waco, Texas—an incident records show occurred 25 years prior.

If the amnesia and the title of the book have you thinking some alien force is about to get up to some mystical hoodoo-voodoo in McCoy’s brain, prepare to be severely disappointed (or perhaps relieved, depending on your outlook). Since the true primary conflict of the story derives from Bones and the fallout from his memory loss, we’ll talk about the titular Ravens later.

The most striking aspect of McCoy’s memory loss is the sheer mundanity of its cause. In a way, it’s actually sort of refreshing. Much is made—even within this very book!—of the risks of the unknown one accepts upon enlisting in Starfleet, but it’s incredibly easy to gloss over microscopic things, the type you can fool yourself into thinking couldn’t ever happen to an able-bodied person. McCoy’s injury serves as a stark reminder that no one, regardless of rank or billing, is exempt from succumbing to banal accidents.

Shouldering the bulk of the responsibility for McCoy’s care is this week’s featured original character, a junior medical officer named Diana Dyson. She gets the job because the acting chief surgeon, a guy named Cortejo, is such a huge jerk that even Spock hates him, and it’s unanimously agreed that he’s better off channeling his energy into helping out elsewhere. So why focus on yet another OC when we have a golden opportunity to develop a minor character, like, say, Nurse Chapel? So the author can indulge her fantasy of kissing Bones, duh! You don’t need to be a windtalker to crack the intricately crafted code of CC (Carmen Carter) → DD (Diana Dyson). Enough has happened previously that the editorial department knows by this point to watch for obvious slash and self-insertion, but that doesn’t mean an industrious author can’t slip some of that through the cracks with an absolute bare minimum of obfuscation.

Post-memory-loss McCoy isn’t a big fan of the decisions the old him has made and where they’ve led him, and wants to get back to Earth and start his humble country private practice ASAP. Honestly, I wish he could, because he’s not much fun. To hear this book tell it, he was somehow even more of a curmudgeon 25 years prior than he is in the present. McCoy is grumpy, sure, but crucially, it’s tempered by a humanist streak that an author can’t afford to forget about when writing him. There’s also virtually nothing in the way of how his memory loss affects other senior crew members (i.e., his friends) emotionally. Kirk’s desire to have the old Bones back is explicitly entirely selfish (he just wants his FRIEND back, dang it). Only Spock’s interactions with him are interesting and insightful to any degree. He even tries small talk!

If the beginning of McCoy’s amnesia is banal, the end of it is downright inexplicable. It’s floated in vague and noncommittal terms that he either might never get better or it could just come back, and the only thing anyone can do is wait and see. Unsurprisingly, of course, it’s the latter that bears out—literally between section breaks: McCoy goes in to observe surgery on Spock and ends up bailing out the horrendously unqualified Cortejo. Literally the only reason McCoy recovers is that it’s the end of the book. “What? We’re running out of pages? Better make him magically and instantly all better, then.”

And then there are the Ravens. Truth be told, they’re actually a pretty scary villain—sort of a vaguely avian proto-Borg (they even have a queen of sorts). Except for one who monologues at the end, they’re not much for conversation. They crack open people’s skulls like walnuts, swallow their brains whole, and use the memories of voices and past events stored in those brains to lure other people into more traps. Some of this we see in action, and it’s pretty macabre. Carter doesn’t hold back. If they hadn’t been so evasive for most of the book and maybe invaded the Enterprise, they could have been even more frightening. But again, despite the title billing, they’re the secondary conflict in this book. Listening to McCoy gripe about starships and watching a junior doctor fall in love with him are obviously more important.

Overall, Dreams of the Raven is just incredibly unfocused, and every development plays out in the blandest way imaginable. The titular “dreams” are nothing more than a secondhand memory: McCoy remembers some guy who was a patient in a psychiatric ward he worked at who talked about aliens that vaguely resembled the Ravens, and from that half-formed nugget of memory they somehow connect all the dots. Remember that scene from Mystery Science Theater 3000: The Movie, where they show all the scattered interocitor parts and Mike says, “There, it’s done. What do you think?” This book is like that. An uncommonly sloppy showing I can’t in any way recommend.

I give Dreams of the Raven 1.5 out of 5 traumatic head injuries. According to Voyages of Imagination, Dreams of the Raven was an unsolicited manuscript accepted in the midst of an unexpected hole in scheduling, which to me explains a lot. It is on several levels a deeply unsatisfying book that could have used about fifty more pages and two or three more passes through the revision stage. The rest of the works we’ll read by Carmen Carter star the TNG crew; perhaps she’ll do a better job with them.

NEXT TIME: A fateful meeting with some Strangers from the Sky