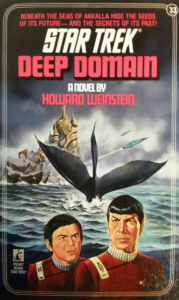 This week, we’re … saving the whales? Hold on, didn’t we just do that two weeks ago? Nevertheless, here we are, and although Deep Domain does share some themes with The Voyage Home, it travels a wildly different story path, as Howard Weinstein assures us in his Author’s Notes. How different, you ask? Missing officers, a military coup, family trouble, broken treaties, government secrets, isolated civilizations, and cetacean mutations—and those are just the ones I can rattle off the top of my head. And if that sounds like a lot for a <300pp. book to juggle, perhaps it won’t entirely surprise you to learn it’s not totally successful in that endeavor.

We open on the planet Akkalla, a world comprising 98 percent water, joining three scientists I won’t bother to name, because they vanish halfway through the book, which sucks because I really enjoyed their chemistry. They seem to be on the verge of a scientific breakthrough of some kind, but they’re stymied on one side by academic protesters who don’t want the Federation on their planet, and on the other by the government, who isn’t giving them the bum’s rush but also isn’t exactly bending over backwards to accommodate their needs. They are escorted from their lab to a house arrest, presumably to be taken to wherever it is that Weinstein puts characters and story elements to be forgotten about.

Meanwhile, Sulu plays surrogate big brother to an officer named Seena Maybri, a biologist specializing in unusual ecologies. He gets her hooked on chocolate in one of a couple of whimsical running jokes I enjoyed. I hope she likes page time as much as chocolate, because she gets plenty of that too. She’s rarin’ to get to Akkalla for the ecological survey because she’s really into water planets, but first the Enterprise has to reroute to Vestra V to fix a famine, so Kirk sends Spock and Chekov ahead in a water-optimized shuttle, the Cousteau, on loan from Starbase 18.

They witness Akkalla’s planetary next-door neighbor, the Chorymi, creating a hurricane to suck tons of seafood up into their harvest ship. In hindsight, it’s kind of like the Vortex from Ecco the Dolphin, which you might remember if you were one of the very few who managed to finish that game without putting your fist through your television. There’s a treaty in place that allows the harvests, but based on the Chorymi’s approach and the presence of fighter ships, it looks like that’s all but gone right out the window. The Chorymi become aware of Spock and Chekov’s presence and knock out the Cousteau, forcing them to seek land and attempt to survive until the Enterprise finds them, but they almost immediately fall into the clutches of Zzev, the leader of a rebel outfit called the Cape Alliance.

I will never forgive this game for making it incredibly easy to accidentally enter the password for the final level, which is an autoscrolling alien nightmare hellscape that confused the ever-lovin’ bug snot out of 10-year-old Jess.

Not that they normally have a whole lot of direct interaction, but I’ve always felt Spock and Chekov’s chemistry as a duo is underrated. Sulu and Maybri are the ones explicitly set up in the mentor/mentee relationship here, but I’ve long imagined Spock as regarding Chekov in a mentorly fashion, recognizing his potential and going out of his way to praise him when he does well, and Chekov admiring Spock’s logic and unflappable nature and working hard to impress him. So it was anything involving them together that I looked most forward to as I began the book—and in that area, it delivered. Right before Zzev captures them, Chekov valiantly tries to add some levity to their situation by reminiscing about summers spent roasting marshmallows and singing campfire songs, only for Spock to disappoint with what he considers equivalent experiences. It’s without question my favorite part of the whole book.

Kirk and the team wrap things up on Vestra and learn Spock and Chekov are missing, so they pay a visit to the Publican (head of the government), Abben Ffaridor, and his assistant, brigadier general Jjenna Vvox, to see what’s up with that. By the way, in case you hadn’t noticed, everyone on Akkalla doubles up on the initial consonant in each of their names, which doesn’t serve any legitimate linguistic purpose other than to instantly kill your reading momentum while you try to decide whether to pronounce both consonants or just slide past it like the repeating one doesn’t exist (I did the latter). Honestly, it llooks ppretty ssilly. Anyway, it doesn’t take two minutes to figure out that Jjenna Vvox is very clearly the one wearing the pants in this partnership.

Vvox is the obvious villain from her first appearance, and the book does nothing to dissuade you from that perception. In fact, she’s a lot like Ursula Mornay from Battlestations!, a cartoon character who’s nowhere near subtle enough to be engaging. As in Weinstein’s previous Trek novel, The Covenant of the Crown, there’s a good amount of political intrigue to go around, but this time he’s spinning a lot more plates, and they’re not all staying on the poles. Vvox plays both the Publican and her right-hand man Rrelin Hhayd (YEESH, these names) like a fiddle, bboning her wway to the ttop in her quest to be the one who gets to rewrite the Akkalla/Chorym treaty the way she sees fit.

The Publican is also a villain, though of a different stripe. He reminded me of George W. Bush, of all people, in that he’s an incompetent doofus who’s perfectly content to let nakedly evil subordinates carry out egregious human rights violations, and if a few war crimes happen to take place in the name of keeping order, oh well! (He even paints in his spare time!) He doesn’t even show remorse when the jig is up; he just sort of tells Jjenna, “Pack it in, it’s over.” His naivete and frumpiness irritated me a lot, just as with our 43rd president. If I were to see Abben Ffaridor in person, I have a feeling I wouldn’t like the look on his face.

Where this book really falls down is in multitasking. Weinstein often spends several pages on one set of characters and/or circumstances, such that you often find yourself thinking, Surely events are still transpiring concurrently throughout the rest of the world? I’ll grant that we don’t need to know anything about, say, the famine on Vestra V while Spock and Chekov’s ecological survey gets off to a rocky start, but especially once they get to the isolated island near the end (despite not really liking the book, certain parts of it are interesting enough to not spoil), the thought of encroaching Akkallan military forces never leaves the back of your mind. Any given passage has a tendency to make you want to check in on everyone who’s not currently present. It’s strange to be acutely aware that other things should be moving forward while the thing the story is currently focusing on is happened, but I’ve never felt it in any readings of previous novels, and I feel it doesn’t speak kindly to this story’s ability to immerse the reader.

Several things also conspire to muddle the importance of the Wwafida, the cetacean people that turn out to be the actual important key to the story’s resolution. Early on, one gets the impression that the “secret” the Federation science team and the Cape Alliance are close to zeroing in on has something to do with the “whales”—i.e., the Akkallan triteera, the beast whose tail is seen on the cover—but it’s later learned that Akkallans are supposed to live out their twilight years at sea, but because of religious tradition, they’ve been ritually cutting out the gland that initiates their transition to sea people for several millennia. The redundancy results in a sort of misdirect, where it’s not clear until very late that the Akkallan connection is with the Wwafida and not the triteera. Also, the whole thing with the Chorymi doesn’t help. They’re largely a cipher that’s never communicated with directly and typically dealt with using force. They’re just one antagonist too many, and they don’t pull much weight; I wouldn’t shed any tears if they’d been cut.

I didn’t even get to anything involving Preceptor Llissa, the leader of the planet’s academic consortium who doesn’t appreciate her SANCTUARY OF KNOWLEDGE being lumped in with the Cape Alliance and their shenanigans, because frankly I wasn’t very into it. The same goes for other original characters as well; Maybri’s enthusiasm is commendable and she’s reasonably adorkable, and science station stand-in Greenberger is a capable officer whom Kirk weirdly misidentifies as “Greenbriar” a few times (which seems to me somewhat out of character for Kirk, who I seem to recall is the sort to go out of his way to know at least a little something about everyone aboard his ship). It’s so hard to get a bead on anything in this story, I honestly don’t feel like I comprehended it that well. Much like the Chorymi harvester ships, Deep Domain sucks up a wide variety of ideas. Problem is, it can be hard to pick out the stuff that matters from the stuff that ultimately doesn’t.

I give Deep Domain 2.5 out of 5 toasty marshmallows. Just a big tangled-up mess of a book, though not without its bright spots, most of them in the areas of character work and the sort of gentle humor Star Trek excels at. Despite not being that great, it’s so wildly divergent from The Voyage Home that the only way in which it suffers by comparison is in terms of proximity of release. Howard Weinstein was part of the original team asked to pitch ideas for the fourth film, but obviously they went the (much preferred) direction they did. If you’re anthropologically interested in following the long tendril of a potential “what might have been” scenario, you may think about giving this one a shot. Otherwise, only check it out for completion’s sake.

NEXT TIME: It’s important to follow your dreams, but maybe not the Dreams of the Raven