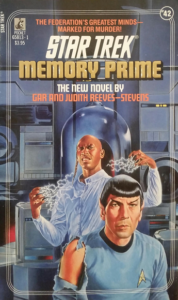 Memory Prime definitely has one of the stranger openings to date. On a backwater desert planet, in a town called Town, we meet an unnamed Vulcan assassin who accepts an assignment from a Klingon who turns out to be a robot. Buh? Meanwhile, Kirk has given Spock the honor of hosting a delegation of sixty scientists who are going to the Nobel/Z.Magnees Prize ceremonies on Memory Prime, and though his face doesn’t show it, he’s as tickled pink as a Vulcan can get. But the festivities grind to a halt when Commodore Wolfe locks him up and identifies him as the prime suspect in a plot to kill all those scientists. Spock stands accused of being a member of the Adepts of T’Pel, an organization of Vulcanoid assassins who have abandoned all logic and just want to watch the galaxy burn.

Commodore Wolfe marks her territory all over every available surface, and man, is she a handful. Of the many know-it-all desk jockeys we’ve seen who barge in and take command, she’s easily among the more aggressive, if not the most. With her loyal underlings and lack of hesitation to wave the kill setting at Starfleet personnel, there’s barely any need to hunt for the real villain—they’ve got a perfectly good one nosing around every corner of the ship and the colony. As the book goes on, she becomes more and more unhinged, and though it eventually becomes clear she’s following fake orders, she never quite softens up enough to cancel out her prior behavior.

Memory Prime picks up the Memory Alpha thread that the season three episode “The Lights of Zetar” abandons midway in favor of the more interpersonal drama with Scotty, Mira Romaine, and Mira’s possession by the Zetarians. Learning from the mistakes of Memory Alpha, Memory Prime is now just one of several Memory planets, each of which is spaced very far apart from the others, is heavily shielded, and specializes in a specific field of knowledge. Information is downloaded from all over the galaxy by the Pathfinders, former humans who have elected to be turned into living machines and who operate on a different plane of reality they call Transition, completely ignorant of the events and influence of Datawell (i.e., meatsack space).

The concept itself is intriguing, but the passages written from the Pathfinder POV are abstract in the extreme and gravid with technobabble. I’m hardly a dummy, but I admit I had significant difficulty wrapping my head around these passages. The Pathfinders play extremely intricate games and formulate theories of massive cosmic import in the space of nanoseconds, never sharing with Datawell what they find but rather socking the information away until some human out there chances upon it, and frankly it’s all a bit much for this unenlightened meat brain to handle. That abstractness leaks out heavily into the rest of the book as well; a late sequence where Kirk, Spock, and Mira beam down into the core of Memory Prime via a series of connected portable transporter pads is high on a long list of moments that are somewhat difficult to mentally visualize on the first pass.

Also, this might seem like an odd complaint, but there are a lot of robots in this book and it kind of wigs me out. Personally, aside from androids, I’ve never felt that robots jive well with Star Trek‘s particular milieu or aesthetic, but this book is absolutely lousy with robots. The ubiquity of robots is the clearest manifestation of something else that feels strange about the book, which is the way it mingles with the DNA of other popular sci-fi properties—not in the more cameo-intensive way of a story like, say, Ishmael, but just taking on some of their vibe. Town is a dead ringer for Mos Eisley, for instance, and the research associate robots that trundle all about the Memory Prime facility are described in a way that’s more than a little reminiscent of Daleks. Memory Prime certainly has a noticeable dab of Star Wars and Doctor Who lipstick on its collar.

On the other hand, the meatspace portions of this book are buoyant and well-paced. There’s sadly not much to be done about Mira Romaine, who even in her greatly expanded role here remains about as exciting as the lettuce she shares a surname with, and whose ability to accept alien intrusion into her brain turns out to basically amount to “She just can, okay? Leave us alone.” But despite the ramped-up tension, there are both chuckles and guffaws to be had throughout, and the senior bridge officers all get multiple great moments and share the exact kind of great chemistry we want to see from them. In particular, their willingness to support Kirk’s plans no matter the cost to their careers is touching. Star Trek doesn’t usually run so high-stakes except in movies, and while it’d be less special if it happened all the time, seeing it happen in a more small-time story is a treat.

Before breaking into Star Trek novels, Judith and Garfield Reeves-Stevens wrote science textbooks, which might go a little way in explaining why Memory Prime leaves me feeling clinically unattached. It’s very technically proficient, with an especially strong grasp of the “science” part of science fiction, but it just seems to be missing “it”—i.e., that spark, that X-factor. Overall, it’s a pretty cold and calculated book with a smattering of warm human moments, and like the television episode it’s an extension of, it’s bogged down by what I found to be a rather uninteresting second half. But the seeds are there, and with some stronger writing, the Reeves-Stevens duo’s crazy ideas could easily go truly stratospheric.

I give Memory Prime 3 out of 5 research associate robots. Get used to the names Judith and Garfield Reeves-Stevens—we’re going to be seeing them a lot, mostly in their numerous collaborations with none other than Mr. Bill Shatner. Memory Prime isn’t the most auspicious launch, but the raw talent is there. Also, I read some of their later stuff even before starting this project, so I know some of what lies ahead, and suffice it to say I’m not worried about it.

NEXT TIME: The Children of Hamlin