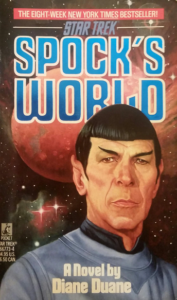 This week, Vulcan considers pulling out of the Federation upon feeling like they’re not benefiting much from the deal, and Kirk, Spock, and Bones are summoned to testify in favor of Vulcan sticking around. As they prepare their remarks, anonymous internet trolls post their two cents, lasagna is served, and the Enterprise mixer rages on. Along the way, the history of Vulcan unfolds through tales of some of its less noble moments. How do they store fresh coffee on the Enterprise? How would a Vulcan work out the logic in becoming addicted to video games? Is this Duane!McCoy’s biggest mic drop yet? It’s the book where we learn how Amanda really feels about Sarek.

Spock’s World
Author: Diane Duane
Pages: 388
Published: September 1988
Timeline: After The Motion Picture
Prerequisites: As far as canon, “Amok Time” (TOS S2E1), which might actually count as a spoiler depending on how well you can put two and two together. The Romulan Way (TOS #35) isn’t required, but if you’ve read it, you’ll be prepared for this book’s structure, since it’s identical. Otherwise, familiarity with major original characters from previous Duane novels, especially The Wounded Sky (TOS #13), is recommended.

It doesn’t take much to yank the Enterprise crew back from shore leave, but rare is the event of enough import for them not to complain about it. In this case, Vulcan is considering seceding from the Federation. Someone’s put a bee in their bonnet about associating with humans, and a growing number of Vulcans want to pull back before human cultures and attitudes irreversibly rub off on them (and vice versa). As off-worlders who have had intimate and mostly positive experiences with Vulcan culture, Kirk, Spock, and McCoy are summoned to participate in a formal debate in opposition of the decision; Sarek is compelled by duty to his government to argue in favor of pulling back, even though he really really doesn’t want to.

While you wait for the formal debates, put your feet up and relax, because the first third of Spock’s World could very well be Star Trek‘s longest victory lap for itself since The Motion Picture spent seven minutes swooping around the Enterprise in spacedock. It takes over 200 pages to get to the debates, and in the meantime, the crew members are slowly but surely summoned back to the ship, the head of Recreation throws a cozy little mixer, and a subplot unfolds where Kirk lurks on the Enterprise Discord to get a feel for general sentiment about the secession that amounts to forum drama.1In modern social media terms, the Enterprise BBS is probably most analogous, distressingly, to Twitter, in that it allows crew members to promulgate hate speech anonymously under the whole “nothing is more important than free speech” argument that most people with half a brain now realize is a total sham. This may not seem like the most thrilling stuff, but the pace is better described as luxuriant than glacial, and for anyone who wants to know more about the more mundane day-to-day operations of the Enterprise, it’s practically catnip.

Of course, it’s not all hanging out on the Enterprise. Like Duane’s previous novel The Romulan Way, the chapters of Spock’s World alternate between the present and the history of the featured race (in this case, Vulcans, obviously), though here it’s been tweaked somewhat. Rather than a straight historical account, the history of Vulcan is told through short stories set in various pre-logic and -enlightenment eras, from the formation of the planet itself to the rises of Surak and Sarek. These paint a much more chaotic picture of Vulcan than we’re accustomed to thinking about—one of a people still consumed and ruled by roiling emotions, often overcome by emotional motivations like power, greed, and/or vengeance, and for the most part just trying to eke out whatever even slightly non-miserable existence they can.

As much as I personally greatly enjoyed these segments, I keep going back and forth on their actual usefulness or relevance. Without them, the book barely reaches the length of a standard numbered book, to say nothing of meriting event status. The audiobook omits the Vulcan chapters entirely, which while hurting my heart is possible to do without hurting the main secession plot. And I think, strangely, that there’s this sweet spot you kind of have to be in where this book will have its maximum possible impact on you. If you don’t know enough about Star Trek before reading it, you won’t appreciate how far the Vulcans had to come to get to the culmination of their adoption of logic and cthia, and if you know too much, the Vulcan stories will just seem like little more than well-performed thought exercises. On the other hand, because the two halves are largely unrelated and so wildly different from each other, it often feels like you’re getting two books for the price of one, and the historical material features some top-shelf writing, so I don’t want to analyze it for so long that I start to appear ungrateful about it.

The big theme of the main present-day half revolves around a word I mentioned shortly above: cthia, mistranslated by none other than Amanda Grayson herself during the development of the universal translator as simply “logic” but more accurately rendered as “reality-truth”—i.e., the ability to look past how you want things to be and see them as they really are. It’s going to take more than anecdotal pleading to push the pendulum of secession back the other way. To get to the bottom of the reason Vulcans suddenly want to cut ties with the Federation, our classic trio is going to have to dig for the real truth. Okay, so it’s mostly Dr. McCoy that ends up doing the detective work. Nevertheless, the journey to the ultimate truth remains fascinating throughout.

The debates themselves, once they finally begin in earnest, are the best part of the book. It says a lot about the richness of these characters and the talents of Duane that 1) you can read pages upon pages of paragraphs of these folks just talking and talking and never once want to skip ahead and 2) that Kirk, a character renowned for his all-encompassing speechifying, gives, through no fault of Duane’s or his own, probably the least interesting speech.2The fact that Kirk’s speech gets interrupted and never finished neither boosts nor damages it in any significant way. The debates are sort of the World Series of Logic, and watching each character hold their own against the madding crowd in their own distinctive ways is a delight.

In many ways, Spock’s World represents the apex of the Duanian mode. All her trademarks are present—her love affair with Irish and Welsh culture, her careful inclusion of multiple prominent non-hominid crew members, her irresistible urge to give Dr. McCoy at least one excellent moment of face-melting ownage, etc. If you can’t get enough of her style, this arguably is the most potent dose of it you can get in any single book.

Spock’s World was the first Star Trek novel to be printed in hardcover, and it spent eight weeks on the New York Times bestseller list. These honors, I feel, are logical: this book feels like the sort of licensed material you want representing the core of Trek on a worldwide scale. The phasers have been holstered; the only weapons here are words. At least for today, nobody’s trying to blow anything or anyone up or destroy the universe. They’re just trying to understand each other, striving to remind each other why and how their continued alliance works to the greater good. This is pure, distilled, Trek-style philosophizing and reasoning through problems at its finest. I am of course a completionist, but in truth only a very minuscule percentage of Trek novels are worth an unequivocal recommendation. Spock’s World is one such book, especially for anyone whose main Trek-related interest is Vulcans. Whatever you fancy, there’s bound to be something in this book you’re going to love.

I give Spock’s World 4.5 out of 5 aborted coffee transports. In many ways, Spock’s World represents one of the strongest cases for the most outstanding aspects of both its franchise and its author. What you’re getting here is peak, sleek Trek, with all of the good stuff and none of the warts. With the Vulcan history, it’s easy to feel like you’re getting a disproportionate amount of gravy to biscuits, but it’s never distracting or unwelcome. I wouldn’t hesitate to put this novel on a shortlist of tie-in books anyone who enjoys Star Trek even a little bit should read. An all-timer, without question.

NEXT TIME: Cursed is The Peacekeepers