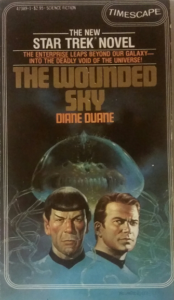 I read my first Star Trek novel—Doctor’s Orders by Diane Duane—in 1995, at the age of 10. I didn’t have much experience with TOS at the time, and I didn’t know anything about canon and non-canon—I just knew I wanted more adventures with those characters. As Star Trek novels go, I still think I could hardly have made a better first choice, especially for a standalone story, and for a long time, through fluctuating levels of interest in expanded universes, it remained my favorite.

Even with a lot of TOS and a little Duane under my belt, however, absolutely nothing could have prepared me for The Wounded Sky.

The Wounded Sky
Author: Diane Duane
Pages: 255
Published: December 1983
Timeline: Between The Motion Picture and Wrath of Khan
Prerequisites: None

After months of suspense and red tape, Kirk learns Starfleet has selected the Enterprise (natch) to test a new device called the Intergalactic Inversion Drive. Instead of moving forward a pittance of light years at a time, they can now choose any point in space—even outside the known galaxy, since, as it turns out, the “barrier” the Enterprise once crossed was actually “the leading wavefront of a megabubble”, and thus it’s possible to leave the galaxy without pulling a Gary Mitchell—and pull their ship through an alternate universe and out the other end, arriving at the calculated point.

They arrive at Starbase 18 and meet K’t’lk, expert in “creative physics” (a field even Spock has a hard time comprehending) and inventor of the Intergalactic Inversion Drive (hereafter, the IID). K’t’lk is the huge transparent spider/jellyfish thing on the cover, looking like the sort of creature one would normally expect to be the Alien Threat of the Week. Not so this time, of course—she’s actually quite nice and full of good humor, and even has an adorable penchant for malapropisms. She’s also the “pretty alien scientist” alluded to on the back cover synopsis, a hilarious yet not inconsequential subversion, as it helps brace you, in whatever small way, for the kinds of mindblowing feats Duane has in store for you later.

We’re also introduced to the Chief of Recreation, Lt. Harb Tanzer, who takes his crewmates’ playtime very seriously. Duane really lingers awhile and lets her original characters simmer, giving them ebullient personalities and allowing us time to become organically attached to them. That’s probably the main reason The Wounded Sky is a good thirty pages longer than the next-longest book before it. There’s a lot of space between major events that Duane fills with exotic flavor and lore. I suppose it doesn’t do much for the story’s momentum, but I personally eat this kind of thing up—in fact, I’d consider it one of my primary expectations from EU literature. One of the reasons one takes an interest in tie-in novels at all is that they like hanging out in a given universe with the types of characters and personalities it offers, and Duane’s indulgence in it here provides an acute reminder of just how sorely it’s been lacking in previous installments, even the better ones. Duane is capable of building over half a book around exactly this sort of flavor—e.g., just wait until we get to Spock’s World.

Back to the business at hand, though: the IID is a pretty nutty piece of machinery, borne of a combination of intensive research on (then) bleeding-edge science and fiction that really strains the outer limits of what Treknobabble is capable of cushioning. I read the explanation of it about ten times and I’m still not totally sure I have it right, but here goes: the IID makes use of a sort of “alternate universe” called de Sitter space, which contains infinite mass. In zero time, the ship gets pulled inside-out, is hypercompressed into a pinpoint of de Sitter space, and then is pulled all the way through negative curvature back into positive curvature, reappearing at another section of zero time established and calculated prior to the jump. The jargon doesn’t actually matter all that much since the whole thing breaks several existing laws of physics anyhow. It’s like Marge Simpson with potatoes: I just think it’s neat.

K’t’lk performs a brief test run that doesn’t take the ship anywhere, and though she assures Kirk he won’t feel a thing, he totally does, but he brushes it off. Right before the first real use of the drive, Klingons show up hoping to steal it. Sulu, in a real helmsman’s showcase, pulls almost ten pages of insane piloting shenanigans, culminating in activating the IID close enough to a star to make it go nova. All the flying around throws off the carefully balanced equations, and they end up about 5700 light years from where they were. This time, Kirk experiences very vividly the sensation of being the Enterprise, while Spock has whole memories of an experience on a planet he’s never been to. Subsequent jumps cover greater distance while producing even wilder visions. Kirk simultaneously inhabits and observes Chekov’s past as well as another crew member’s; then everyone fights off beasts on a nature preserve planet while Sulu, at the conn, pulls off mad computer hax that really he shouldn’t have time to perform mid-inversion but which end up saving everyone’s bacon.

By now, it’s obvious that use of the drive is horrifically warping the fabric of existence. (Page 161 helpfully puts things into extremely terrifying perspective.) Spock can detect Hawking radiation (i.e., black holes) on the sensors, and a universe without entropy will overtake everything in ours within months. The only solution is to contend with the anomaly at the source, but the jump to reach it will be the longest yet, and by that point, there is fear that the crew may cease to function as individuals, creating a weird group-linked “die in the Matrix, die in real life” sort of scenario.

Without getting too deep into spoilers in the headier back third of the book, it’s impressive how it gets psychedelic and abstract without becoming inaccessible or pretentious—apparently a rare talent. Not to sound like a fifth-grade pro-reading campaign, but this book reminds you of the places books can take your imagination that special effects of the time couldn’t. (Heck, it’d even be difficult for the special effects of today to come close to doing justice to the feats Duane accomplished with just words.) It took effort for me to keep up with it sometimes, but it was always well worth the mental energy expended.

A lot of the value of Star Trek is in the idealism of its diversity, and while the series sowed those seeds, this often feels like the real harvest. Duane features aliens with peculiar biological makeups and forms beyond the humanoid with such regularity that it’s hard not to feel almost over-equipped to understand and empathize with those in today’s society who fall outside the binary gender construct and easy demarcations of race. Some of them even use atypical pronouns! And this was in 1983! I truly sometimes feel like there’s no better modern pop culture you can use as a guide to help turn yourself into a well-rounded, empathetic person than Star Trek, and The Wounded Sky really backs up that mindset.

Wounded Sky also does something I don’t feel like science fiction is willing to do very often (or at least the science fiction I’ve read doesn’t): it not only accepts but embraces the possibility of a higher God-like form of life. I realized one of the last things I’m expecting when I read a Star Trek novel is to actually have my faith reaffirmed, and indeed but this book did just that. Science and religion don’t have to be mutually exclusive, and Duane does an excellent job of reconciling them, exploring the merits of both without scoffing at one or the other.

I’d have been thrilled with an emphasis on even just one of the qualities above, but on top of including them all, she makes sure to pack it with an emotional wallop too. I have a job that enables me to spend almost my entire night reading if I so choose, and that’s where I get the reading and note-taking for these entries done. I cried so hard and so often at some of the emotional payoffs in this book, I had to stay turned away from the coworker I was paired with that night for a while. It’s sometimes easy to forget not only that these characters have developed a real rapport from working with each for so long, and not even that they like being around each other, but that they truly love each other. There’s no adequately preparing you for how bare these emotions are laid out; the way it’s done and the intensity of it is something that if you call yourself a Trek fan, you really owe it to yourself to see for yourself.

I could go on all day about this book if you let me, but I’m already finishing this about half a day later than these things normally go up. Just go find a copy of The Wounded Sky and buy it. I don’t care how much it costs; you can’t overpay for a book of this caliber. I don’t even care if you like Star Trek or not. Purchase it, read it, and be enlightened and improved thereby.

What a rollercoaster the last few installments have been; we’ve gone from the best one to that point, to the worst one, to a new best, all in the space of three weeks. This is the first Star Trek novel I would recommend beyond the basis of it being a good Star Trek book. It’s a good book, period. It’s just that it happens to feature Star Trek characters.

Anytime you see the name Diane Duane in the byline, get ready for some top-shelf Trekkin’. No author yet has shown a greater grasp of character interplay and all the ideals that comprise the true core of Star Trek. Imagine getting to Mutiny on the Enterprise and giving up right before this! The 80s was a rough time for the literary exploits of Star Trek, but if you ever have misgivings about their potential, you need only read this one to erase any doubt that reading these books is a worthwhile pursuit and that there are indeed amazing stories and sagas to be mined from the source material.

NEXT TIME: The Trellisane Confrontation