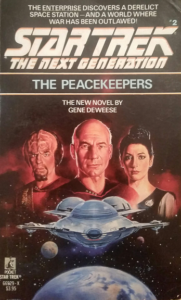 This week, when Geordi and Data poke around a derelict station, they wind up with a one-way ticket to a zero-G peace resort halfway across the galaxy. But even though the guy running the joint destroyed the entire nuclear arsenal of the planet below fifty years ago, discord continues to flourish. Meanwhile, Picard browbeats everyone in sight for answers, but Riker and Tasha end up taking the same joyride not much later. Could Geordi pretty much do Troi’s job? How is Worf’s first day of improv classes? Will Ensign Carpelli hole up in his quarters and cry it out with a pint of Ben & Jerry’s after his duty shift is over? It’s the book that dares to ask, “What about the Prime Directive?”

The Enterprise approaches an alien vessel, a rectangle with no discernible ports or openings. For such an old, abandoned ship, it’s kept up very well with the Windows Updates on its booby traps, attempting to self-destruct every time an away team beams over. After disarming a few such kamikaze attempts, Riker and Tasha make it back to the Enterprise safely, but Geordi and Data get caught with the shields up and their pants down, getting transported out of sensor range by the USS Rectangle before it finally succeeds in blowing itself up for good. Despite doing literally the best anyone could have done in the circumstances, Picard gives Ensign Carpelli, the crewman manning the transporter, an insane amount of grief about losing them.

While Picard orders increasingly wider sensor sweeps, Geordi and Data find themselves on a space station orbiting an unidentified planet and meet Shar-Lon, who believes them to be some sort of ill-defined progenitors known as the Builders. Geordi does nothing to disabuse him of this misconception. Shar-Lon is eager to show “the Builders” how he has put their “Gifts” to use in their absence, and Geordi is perfectly content to pretend to be a Builder and pass down judgment while Data follows his lead (despite being his commanding officer). This sort of impersonation has a more common name, which certain acute observers may recognize as “smashing the Prime Directive into a fine powder with a ball peen hammer”. In the absence of his captain, Geordi routinely asks himself: “What would Captain Picard do?” I can’t say for sure what exactly he would do, but I can say with the utmost certainty what he would not do, and that is pretty much everything Geordi does here.

While Shar-Lon explains how he came to be availed of the Gifts, Geordi uses his VISOR to play Troi-lite, reading the infrared reactions of Shar-Lon and others to get a bead on their emotional responses to his and Data’s presence. He can’t exactly tell whether or not people are lying, but still, it’s good for Troi’s continued employment in Starfleet that no one ever found out about this in the TV show. Much like Diane Carey, DeWeese is disproportionately fascinated with Data’s lack of idiomatic comprehension and Geordi’s eyesight, though unlike Carey he doesn’t seem to have any particular insight about them.

It turns out Shar-Lon has been hoarding the so-called Gifts for himself. His planet was on the verge of mutually assured nuclear annihilation, and while he was tooling around out in space, he found the orbiting station, which he called the Repository, and used its technology to disarm the planet’s entire nuclear arsenal and confine anyone who gave him crap about it to the surface, which has the folks down there understandably displeased. His brother Shar-Tel, whom he believes is dead, is alive and well and leading a band of dissidents working against him; Geordi and Data eventually come into contact with him and get his side of things. Meanwhile, Shar-Lon’s right hand man Kel-Nar is also trying to gain control of the Repository for his own nefarious ends. That’s a lot of hyphenated names to keep up with.

Through various plots and machinations, Kel-Nar ends up being the biggest threat despite not being a character who ever says anything or who the reader ever actually has much if any direct engagement with. We hear about things he has done and things that happen to him, but there is almost nothing focusing sufficiently on his perspective or his motivations. He is a total cipher and an unfortunately too-accurate all-encompassing symbol for what a mess this book is.

One huge problem with this book is the insane amount of talking. To an extent, of course, Star Trek is supposed to be more about talk than action, but this book takes it way too far, tells way more than it shows. Some of these characters really know how to get on a jag once they get started. We’ve certainly had more than a few unequivocal stinkers so far, but The Peacekeepers was, for a while, the first book I wanted to tap out on out of sheer boredom. But ultimately, this book is not content to stop at mere tedium, no indeed.

So how in fact do you go about fixing a Prime Directive violation? Commit an even bigger one! To keep the planetside people who are cheesed off at Shar-Tel from killing him and the other Peacekeepers, the Enterprise crew beams them directly into a holodeck simulation, starring Worf as a scary monster who bares his teeth a lot and spooks everyone into making nice. More and more it seems as though DeWeese saw someone put out a fresh container of stupid at the story-writing buffet, and his eyes were bigger than his stomach.

If the worst crime The Peacekeepers committed was being boring, it would have been just another lesser Star Trek book. But it goes so much further than that. Geordi stomps all over the Prime Directive until there’s no way to get it out of the carpets, and yet at the end, a performance by the Sons of Mogh Improv Troupe bails him out and he gets off with a brief, light lecture from Picard, who by the end must have just run out of energy from haranguing everybody else. God, what a stupid, stupid book.

I give The Peacekeepers 0.5 out of 5 derelict rectangle ships. The Peacekeepers is the absolute worst of the lot to date. Worse than Crisis on Centaurus; worse than Mutiny on the Enterprise. Just a total mess all over. Geordi takes a big steaming dump all over one of Star Trek‘s most valued tenets, and yet the guy who bears the brunt of Picard’s tirades was the one trying his hardest to work the transporter against instantaneously raised shields. Sure, okay.

Writing this review proved unusually difficult, because my brain immediately wanted to jettison all the dumb details of this terrible, terrible book as soon as I finished it. Sorry, brain, no can do—you and I are in this for the long haul. On the bright side, just about anything is uphill from here, even something as fairly mediocre as next week’s effort.

NEXT TIME: A field trip to the library with Memory Prime