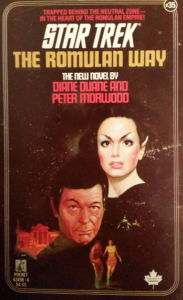 You ever get to a point with food where you’re just completely over it? Like, nothing you can imagine sounds less appealing than eating or looking at food or thinking about food? That’s where I was with Romulans in Star Trek novels for a while. In the wake of Diane Duane’s first Rihannsu novel, a glut of stories featuring Romulans as the villains jammed up the publishing schedule—at one point, they figured into three of the four then-most recent stories—and though for the most part they acquitted themselves well enough, they just couldn’t hold a candle to Duane’s singular approach. (Though to be fair, not much can.) And now, just as I can feel my appetite for them returning, along comes Rihannsu number two—and it’s a meal fit for a Praetor.

Have you ever, in the course of getting to know a pair of siblings, eventually begun to wonder how they’re related? My Enemy, My Ally and The Romulan Way have a similar effect on a reader. The first is a fairly straightforward tale of action and espionage; the second trades in the space battles for historical fiction. The former follows a starship captain, whereas the latter concerns a humble house servant. And where My Enemy, My Ally was a somewhat decent story elevated throughout by Diane Duane’s raw talent, The Romulan Way is an excellent story that’s all the more potent for having the full force of her (and her husband’s) prodigious gifts behind it.

Arrhae ir-Mnaeha t’Khellian (hereafter Arrhae) is a hru’hfe—the master of servants—in the household of an embittered, socially stagnant Praetor. She’s also, unbeknownst to her master and her subordinates, a Federation double agent, real name Terise Haleakala-LoBrutto. She’s been under deep cover for eight years, gathering information on Rihannsu culture and secretly sending it to Starfleet, but the last time she sent out a report was two years ago, fueling speculation that she’s gone native. Despite early assurances in the foreword that she has done no such thing, the question lingers throughout: did she say that to convince the reader … or herself?

Truth be told, Terise actually really digs her Rihannsu life. The Praetor gives her decent freedom of movement and more than a healthy amount of respect and leeway for her station, and her subordinates fear but also respect her. As Weird Al says in “Albuquerque”, “life was going swell and everything was juuuuust PEACHY!” Sure, she has to sneak around a little, but all things considered, it’s not that big a deal. In fact, Terise is close to thinking she could live out the rest of her days driving her boss’s car and barking orders when two soldiers show up at the front door with a surprise that will turn her world upside-down—a surprise named Leonard McCoy.

That’s only half the story. The other half is the history of the Rihannsu, divulged piecemeal in alternating chapters. Beginning with the schism between Surak and his student S’task, Duane covers the logistics of leaving Vulcan, the necessity of creating new and pointedly unVulcan traditions, and their arduous, painful, decades-long search for a new homeworld, during which several ships are devoured by an alien that feeds on intelligence, many of the travelers get dysentery, the lead ship breaks an axle, they have to ford a river two inches deep and somehow wind up drowning three oxen, and they stop to hunt and shoot five buffalo, but can only carry two thousand pounds of food.

Most of this history takes the form of massive blocks of dialogue-free exposition, which I concede will certainly not be to everyone’s taste. But the folks who are into that sort of thing are going to love these chapters. I didn’t just eat them up; I gorged myself. The mythology is so comprehensive, there are even short but satisfactory explications on subjects like Romulan ale and why they don’t have psi-ability like Vulcans. Not all of it is perfect: one chapter about an entire religion growing out of basically a message board thread is too preposterous to let pass with a straight face. But that by itself is hardly enough to keep anyone craving non-canon space history from achieving lore-gasm.

Anyway, back in the present, McCoy is facing certain death like a champ, which is making it hard for Terise to stay in character. It bears mentioning at this point that Dr. McCoy is Diane Duane’s favorite character, a fact that typically manifests in the form of one supreme act of blistering ownage at a given story’s climax, with general awesomeness peppered throughout the rest. In this book, McCoy has been captured and sentenced to death for his complicity in certain prior acts of espionage, and he stalls for time by invoking his Right of Statement and launching into a hilarious, good old-fashioned Southern filibuster, which gives a certain silicon-based crew member time to make a grand entrance and save him. Honestly, there probably wouldn’t have been enough to the present-day story to merit its own book, yet it’s still a story worth telling, and the tag-teaming with the history is a clever way to get it out there.

I’ve talked plenty about Duane, but there’s another author’s name on the book as well: her husband, Peter Morwood. For his contributions, Morwood extrapolated from a highly comprehensive outline while Duane was overwhelmed with script work on Dinosaucers, and it’s a great testament to him that it’s impossible to tell his parts from hers. (Duane claims no one has ever correctly identified which parts he wrote.) Normally, given the notoriously wild inconsistency of Trek novels, a second author having to step in and help out the first would throw up a lot of red flags, but they’ve got the chemistry and the talent to make it look easy. Teamwork makes the dream work!

In general, I’m more than okay with Star Trek books not being canon, but The Romulan Way is one of the few times I felt a little pang for what might have been. Fans even lobbied for it to be made canon, though Roddenberry allegedly didn’t like the direction it took the Romulans (which is as sure a sign as any that one is doing something right). It’s going to be a long, long time before the next chapter of the Rihannsu saga, however, by which point almost all of it will have since been contradicted and invalidated by canon sources. We’ll see when we get there whether that puts any noticeable strain on the series. As of this point in the Deep Space Spines journey, however, it’s unquestionably among the best of the best, helping set the standard, along with The Final Reflection, for literary deep dives on alien history and culture in Trek.

I give The Romulan Way 4.5 out of 5 mint juleps. Once again, Diane Duane reminds everyone why she’s the untouchable queen. The Romulan Way has it all: action, suspense, espionage, epic history, Southern charm, Hortas, and chili discourse. Add the fact that it was written nearly equally by two people (in sixteen days!) and that it’s impossible to tell who wrote what, and you have a pretty impressive feat on your hands. It should be no surprise at this point that Duane leaves everyone else in the dust; what’s amazing is by how wide a margin.

NEXT TIME: John M. Ford asks the question: How Much for Just the Planet?