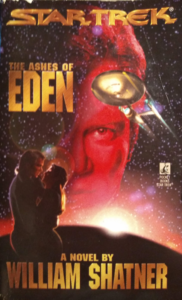 This week, Shatner Claus delivers us a gift in the form of his first Trek novel. Right as Kirk feels the zest draining from his life, an alluring young woman comes along and brings his pocket rocket back up to maximum warp. But his friends are concerned that his dowsing rod might lead him into some murky waters. Who or what are the Children of Heaven? Is Kirk being used? And has Sulu become a company man? All this and more in The Ashes of Eden, the book where he says the thing!

The Ashes of Eden
Authors: William Shatner, with an assist from Judith & Garfield Reeves-Stevens
Pages: 308 (PB)
Published: June 1995 (HC)
Timeline: Six months before the beginning of Star Trek: Generations
Prerequisites: Lots of small callbacks, but mostly The Wrath of Khan and The Undiscovered Country

James T. Kirk appears to have it all: the adoration of the next generation of Starfleet cadets, several of the kind of friend you’re lucky to have one of in a lifetime, and handjobs from Carol Marcus. But in his retirement, he lacks a meaningful challenge to keep the flame burning, and ennui has set in. Before it can unpack its belongings and get too comfy, however, he encounters a tantalizing young lass at a reception honoring Starfleet’s new commander-in-chief, Androvar Drake, an old enemy from Kirk’s days on the Farragut. The lady stirs Kirk’s heart—among other things—but ducks out before he can make her acquaintance.

Nevertheless, he soon gets that opportunity anyway when she shows up at his farmhouse back in Iowa. Her name is Teilani, and she’s got everything to snap Jim out of his deep blue funk and then some: a body that won’t quit, a mission worthy of his talents, and just the ship for the job. Teilani wants Kirk to come to her world, Chal—a joint venture between the Klingons and Romulans, seemingly abandoned by both—and both partake in and help defend its greatest treasure: a vaguely defined sense of rejuvenation and restored youth. Teilani claims one faction wants to profit from Chal’s gift, while the other (hers) wants peace. To secure his assistance, she gives him the one gift he could never turn down: the Enterprise-A. Recently decommissioned and slated to be destroyed in wargames, Teilani instead purchases the ship outright, intending it to be the first in the new defense force to be headed up by Kirk.

Of course, Kirk’s closest friends have numerous hangups about this plan, not least of which is that Teilani is a third his age and is he sure this is really love, dude? Everyone else is moving forward with their lives and careers, while he’s retreating into nostalgia and chasing the dragon of eternal youth. But it could be much worse than that as well. Admiral Drake comes to the rest of the Enterprise senior officers with word that the corruption for which Admiral Cartwright was recently busted goes way deeper than anyone suspected. He claims that Kirk is being manipulated by Teilani into delivering a Klingon superweapon called The Children of Heaven. Who or what that is and who/where he’s allegedly delivering them/it to, Drake has no idea, but he really hates Kirk, so it must be him!

Originally, I wasn’t even going to review the Shatnerverse novels, an exclusion that I now realize is silly and needlessly arbitrary. They’re as much a part of the Pocket Books tapestry as anything else, and who wrote them and why doesn’t and shouldn’t matter. The books that follow this one were more what I had in mind when I made that initial decision; this one doesn’t get into the wacky resurrection shenanigans that we’re going to see starting with The Return, which at the time read to me like Shatner being unable to make peace with the fact that the Kirk character was well and truly dead and exerting his formidable influence and ego to put off that gentle going into the good night a little while longer. It may still come across that way after I read it, but at least I’ll have actually read it.

Anyway, if you’re wondering if you’ll be able to tell right off the bat whether this is a Shatner joint, I’m both pleased and not to say yes. Immediately you get hit in the face with sentence fragments that fit his infamous stilted cadence like a glove. This is distracting for a second, as your brain can’t help but dive headfirst into creating your own audiobook version of the text in your head, but it’s at least mildly interesting to watch him make a game attempt to contribute an adventure to the universe that made him a star. Fortunately, the idiosyncrasies are largely front-loaded, and by the second half these things don’t stand out nearly as much. If you’re here for purple prose and schadenfreude, it isn’t really going to deliver on that score.

What’s somewhat harder to get over is that you can instantly tell that Shatner is a guy who very much works his personal life out on the page. As I read this book, my mind repeatedly drew a link between it and the ending of How I Met Your Mother. Apologies for spoiling an almost seven-year-old series finale, but in case you aren’t familiar with it, the titular story Ted Mosby spends nine seasons telling his kids is revealed to be pretty much entirely a feint to get permission from his kids to go after the person he has the real feels for (i.e., Robin). It feels a lot like Shatner is attempting something similar—that he’s constructing a scenario in which he simultaneously requests permission to follow the whims of his youthful fancy and gives it to himself. And it’s like, who is he appealing to? The world at large? Some specific person? Himself? Whatever the case, he doesn’t seem interested in keeping it up for the whole book, and by the end everything resolves as it must.

It’s hard to tell what parts, if any, are inspired directly by personal experiences, and it may be a little unseemly to speculate, but it’s tough to deny that his behavior over the years has made such speculation kind of irresistible. One in particular is a subplot involving tension between Chekov and Sulu, the former of whom believes the latter has gotten a little too cozy following orders and is no longer trustworthy or capable of doing what’s morally right when the chips are down. Is this a manifestation of Shatner’s longstanding feud with George Takei? Was Shatner trying to take Takei down a peg by turning Sulu into a by-the-book toady and juxtaposing him with his more maverick and debonair Kirk? Maybe, maybe not, but Shatner hasn’t exactly comported himself in a way where you can unequivocally say it’s not a possibility.

What I can say with significantly more certainty, however, is that without William Shatner’s name on the cover, The Ashes of Eden would just be another average no-frills “getting the band back together” adventure. It leans on a lot of hoary old tropes and doesn’t execute them with any especially noteworthy degree of flair or nuance. The behind-the-scenes assist from Judy and Gar is no doubt a big part of what helps it run so clean, and I feel like most of what they did was probably to insert the references and callbacks that give the fans those little dopamine hits they love so much. They have said that Shatner’s contribution to the final product is about 95 percent of the text, which I think may be a somewhat generous assessment, though in general I see no reason to disbelieve them. Future Shatnerverse novels seem like they’re going to be more interesting and creative in terms of plot, so if the writing can match them, maybe some of them will turn out pretty solid. Dare I dream?

The Ashes of Eden isn’t going to rock anyone’s world, but it’s not the out-and-out embarrassment of ineptitude and misplaced ego some might imagine it being capable of being, and as a result it kind of ends up pleasing no one. Shatner managing for the most part to rein in his ego and the Reeves-Stevenses helping with minor continuity helps it run smooth. Unfortunately, with no particular inclination toward either greatness or awfulness, the mind has a tendency to wander and think about things that might not necessarily be all that relevant to the story at hand. But, such are the breaks when dealing with an outsized personality like Shatner’s.