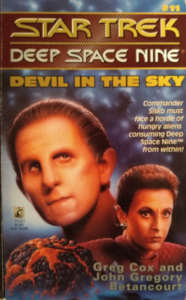 This week, a Horta bound for Bajor gets forcibly rerouted by Cardassian raiders. But when Kira, Bashir, and Dax go to retrieve her, they learn her capture is only half the story. Meanwhile, Odo and O’Brien have to move fast to keep Deep Space Nine from being turned into an all-you-can-eat buffet. Has Odo finally found his comfiest form? Is everything okay at Chateau Picard? And how is Brightspot’s acting career going? All this and more in Devil in the Sky, the book that underscores the need for stronger holosuite privacy.

The Federation sends a Horta named Ttan to Bajor to help resuscitate the planet’s ailing mining industry. But Cardassian thieves intercept the transport, and although DS9 is able to save Ttan’s twenty eggs, the raiders make off with the big mama herself. Gul Mavek forces Ttan to locate the latinum deposits on a backwater moon called Davonia, threatening to harm her children (whom he’s lying about also holding hostage) in order to make her do what he wants. Kira, Dax, and Bashir head out in a runabout with a squad of ensigns to rescue Ttan.

Infiltrating the operation proves easy enough. But while scouting the grounds, the team discovers a horrifying sight: Bajoran prisoners of war, unaware that the conflict has ended, breaking up rocks into gravel, for seemingly little purpose other than the Cardassians’ entertainment. Even though they already have a mission, Kira can’t look the other way, and with her team’s support, they add the liberation of the Bajoran POWs to their already-full plate.

Back at the station, Nog schemes to steal a Horta egg and sell it. He and Jake forget to turn the stasis field back on, but decide it’s not a big deal. As a result, the Hortas hatch and begin feasting on the rare metals that comprise the station’s makeup. With Bajor unprepared and unwilling to receive that many Hortas, Sisko must figure out a place he can deposit the ravenous babies—and he needs to do it before they find the mouth-watering fusion reactors that they can smell and are rapidly closing in on.

Both the names of the gentlemen who brought us this book grace a Trek cover for the first time this week. For one of them, John Gregory Betancourt, this is the first of four Trek novels between 1995 and 1999. The other is a pretty huge deal. I don’t think it’s exaggerating too much to call Greg Cox a major pillar of the Star Trek literary community; he’s written 24 novels, short stories, and e-books for the series in 25 years and is still pumping out Trek works to this day. In fact, Cox is the author of the Trek novel most recently published as of the posting of this review, A Contest of Principles. I read a couple of his books prior to starting Deep Space Spines, and I recall enjoying them quite a bit. Going in, I was excited to see what his first contribution to the series looks like. I think there’s plenty to like about it, but there are a couple of red glowing weak spots that past experience tells me may not hold as much weight with other readers, but which really stuck in my craw.

Since I don’t want to give short shrift to the parts I liked, I’ll check those off first. Of course, the premise itself is solid and alluring, and it’s always great to see the Horta show up. Other than Naraht, we don’t see them come around too often. Depending on the day, I typically call “The Devil in the Dark” either my favorite or second favorite episode of the original series,1It’s sometimes topped by “City on the Edge of Forever”, but only occasionally. and though this isn’t quite a sequel to that episode, references to it abound, and it makes Devil in the Sky yet another link that strengthens the spiritual bond between DS9 and TOS. In addition, Ttan’s anguish throughout her capture tugs pretty effectively at the old heartstrings, and she is by a fairly wide margin the best-written character in the book.

Another character who gets to have some fun, surprisingly, is Odo; I got a big kick out of how comfortable he finds the amorphous Horta form, which he assumes in an attempt to lure the babies away from the more dangerous areas of the station. Although I wasn’t super-keen on some of the attempts at humor, there’s just as much that’s well-executed as that which isn’t. And there’s a pair of unrelated incidents of revenge against the Cardassians that are both legitimately shocking, but also cathartic and appropriately proportional.

Now, however, I have to hunker down and talk about what I didn’t like. I may catch some heat for hammering on the aspect of the book I disliked the most, but here goes anyway: Devil in the Sky is yet another Star Trek novel that is, yes, unnecessarily horny. Readers have previously expressed frustration with my low opinion of how several Star Trek works handle sexual situations, a sentiment I would rebut in a general sense by pointing out that I do acknowledge when I think it’s done well. But the specific instances of it in Devil in the Sky are especially artless, and one in particular keeps getting called back throughout the book. I talk more about a couple of these down in the Nuggets, but in short, they drove me to distraction, and I simply was not a fan of their execution.

Of course, we’re still wading through the batch of stories commissioned before the series aired, so some off-base characterization is to be expected, but I think some of the problems this book has in that regard exceed even the reach of that small measure of grace. For one, I can’t conjure up any vision of Jake that would so lamely go along with a crime as serious as kidnapping. Dax is also a bit of a mess. She gives Kira a light but somewhat arrogant scolding about being more of a team player, yet while Kira acquits herself rather well and performs above and beyond the call of duty on this mission, Dax spends most of it stuck on the runabout alone with her thumb up her butt looking for a misplaced toolkit. She’s also, somewhat oddly, the meaner of the two to Bashir. It’s hardly unusual to see Julian eat a heaping helping of humble pie in early DS9, but Dax’s psychological toying with him comes across far meaner than Kira’s savage yet fair forthrightness.

Where I think I might diverge from a lot of other readers is that even though I think I could list enough things I liked about the book to overwhelm the things I didn’t like with sheer numbers, the bad elements still almost manage to be more bad than the good ones are good. They left an especially sour taste in my mouth, and it’s hard for me to ruminate on the book without going back to them again and again. But judging by how Greg Cox claims they split up the workload,2Voyages of Imagination, p. 237: “Basically, [Betancourt] wrote the chapters involving the Away Team and the rescue of the mother Horta, while I wrote the sequences set back on DS9.” it’s clear both men showed flashes of inspiration even in this first book, and Cox in particular shows a willingness to self-criticize that makes me realize how rare that actually is in Voyages of Imagination interviews and inclined to be a little more forgiving. I think giving in to some less clever and/or mature ideas threatened to take it off the rails harder than expected, but overall it’s a fine debut, especially if you’re looking for a certain specific flavor of pre-Dominion throwaway fare.

For me, this one is actually a pretty light 🙂, but I think most readers will enjoy it a decent amount without too many hangups. Its few lesser qualities do come close to overwhelming the many good points, but in the end it’s a pretty agreeable early adventure that scores a lot of goodwill simply by harking back to one of the original series’s best episodes. More Hortas in everything, please!

NEXT TIME: Into the Shatnerverse with The Ashes of Eden