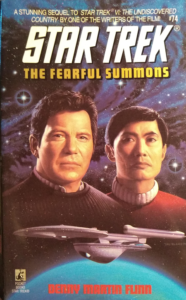 This week, when Captain Sulu gets abducted by rogue traders, his old boss rounds up his friends to mount a rescue. But just because they’re sailing on a luxury yacht doesn’t mean this mission is going to be a pleasure cruise. How does Kirk feel about being a hero today? Will Sulu always need Kirk to clean up his messes? And was Spock born for the stage? All this and more in The Fearful Summons, the book that practically does my job for me.

Shortly after logging their discovery of an exciting new lifeform, the Excelsior responds to a distress call from traders hailing from the Beta Prometheus system. But when Sulu and his team beam over to render aid, the Beta Prometheans raise their shields and book it for home. Back in San Francisco, Kirk, who has Google Alerts set up for all his old bridge mates, catches wind of the kidnapping and heads down to a local watering hole to ply loose-lipped officers for more details. Not only does he get what he’s looking for from a Press Liaison lieutenant named Eugene Marasco, he also gets some out-of-this-galaxy strange from a cadet, Barbara O’Marla, whose ink has barely dried on her diploma. All in all, a productive night.

By morning, Kirk, impatient with diplomatic stalemates and hollow platitudes, has already resolved to take matters into his own hands. In the space of a single day, he travels from Vulcan to Scotland to New York to Siberia to Mars to get all his old pals in on a plan to subvert official channels and rescue their old friend all on their own. Of course, everyone is willing to drop everything (or in Scotty’s case, all the nothing) they’re doing to join him on one more grand adventure, and quite conveniently, his new lover has helm training and isn’t going to take no for an answer. Scotty finagles them a luxury star yacht with some threadbare lies about using it for a documentary, and the crew of the Enterpr—I mean, the Plush Princess head for Beta Promethean space to see what they do about saving Sulu.

Another week brings us yet another return from retirement for the TOS gang, this one brought to us by Denny Martin Flinn, the co-writer (with Nicholas Meyer) of The Undiscovered Country. Calling Flinn’s bibliography scattered would be somewhat of an understatement. Other than this, his lone Trek novel, his only other fiction consists of two mystery novels, and the bulk of his nonfiction is about musicals, including a behind-the-scenes account of the making of A Chorus Line. Because of its proximity to The Ashes of Eden and somewhat similar conceit of bringing Kirk out of retirement for one last hurrah, I compared and contrasted both books against each other a lot while I was reading this one. There are some things The Fearful Summons does worse and some things it does better, but on balance I liked it even less than I did Eden.

I think I would have enjoyed this book a lot more had it been exclusively about Sulu and the Excelsior crew. I’m hoping as we move forward from the films that Sulu is allowed a little more of his own space as a captain; it does the character a disservice if every time he gets in a scrape, he needs Kirk to come bail him out. It also undermines him a little to give him a Vulcan first officer (replacing Valtane) in an attempt to replicate Kirk’s recipe for success, but Sencus is a fun character who is a little more comfortable speaking informally than your average Vulcan, so it didn’t bother me too much. In general, however, I’m going to need more autonomy for Sulu in future post-TUC novels if I’m going to stand a chance of enjoying stories set in that era.

I also found myself rather unimpressed with the Beta Prometheans. There’s so much disorganization and infighting going on between the key Beta Promethean characters that it’s a little embarrassing to watch Our Heroes constantly fall for tricks played by aliens who seem to have their crap barely more together than the Pakleds. And the way they integrate religion into their trading society is such a lethal combination of confusing and boring that I’m not even going to delve into that.

There is also the matter of Kirk once again finding himself entangled with a lover who could be his granddaughter. While I have to admit that Barbara O’Marla seems like a more compatible partner for him than Teilani, this sort of wish fulfillment is nonetheless really starting to grate on my nerves. If I’m going to have to resign myself to this sort of thing happening on a regular basis, however, then ironically, I prefer the approach taken here, where everybody just kind of trusts Kirk’s judgment and gets on with it. She’s not badly written and she’s never a burden, so there’s nothing wrong with the character in a general sense. I just think it’s possible to fill the helmsman void with someone charming and winsome who doesn’t necessarily also have to be boinking the captain.

It’s not all bad. The dialogue feels a little more naturalistic than average, and cursing in particular is deployed with far more skill than usual for Star Trek. Also, it’s hardly spoiling much to say that Starfleet is aware of every step of Kirk’s subversion of the system, but I did it find it kind of nifty how in this case they’re genre-savvy enough to sit back and let Kirk do his Kirk thing, only setting up a few pieces at the outset and letting the rest of it play out the way he runs it. But “one last hurrah for the TOS crew” is a conceit I’d like to see shelved for a while after this. When you get too many stories of that stripe in close proximity, they start to reek of that unattractive boomer quality of being chronically unable to ride into the sunset and let go for good, and I really don’t want to start thinking of the TOS gang in that way.

A second consecutive week of watching the TOS bunch reunite for one final mission results in diminishing returns. They’re matched up against boring and annoying villains who aren’t very competent yet manage to put one over on them multiple times, and the less said about Kirk bedding his second P.Y.T. in as many weeks, the better. This story might have been better served by focusing exclusively on Sulu and the Excelsior and allowing them to figure this one out on their own, and I hope we get to see some of that in the future. Flinn did a fine enough job co-writing a Trek movie, but when he tried his hand at a book, it was, unfortunately, a swing and a miss.

NEXT TIME: Jake Sisko takes a trip down to the Arcade