This week, we’re checking out The Klingon Gambit. 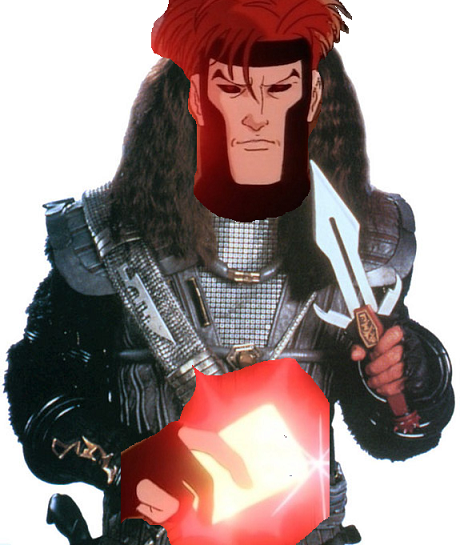 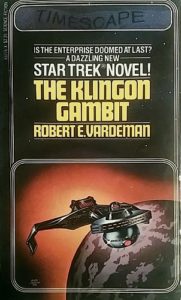 Morale runs high among the crew at the beginning of The Klingon Gambit. They’re about to get to check out Delta Canaris IV, a Class Q planet. It looks like Jupiter, it’s got an ocean made of ammonia, and the beings are about as big as a human hand and thin as a sheet of paper. Wiggy! Unfortunately, a bunch of Vulcan scientists all just died simultaneously on a research station orbiting Alnath II, so they get rerouted to that instead.

Tip for prospective Star Trek writers: Make sure the mission you’re diverting the crew from isn’t cooler than the mission they’re heading to.

We get an early sign that the writing in this one might not be the crackin’est when every secondary and tertiary character gets described by their race:

And as a yucky cherry on top, there’s even some pretty repulsive male gaze to boot (p. 12: “[Kirk and Scotty] both watched the chief leave, her behind twitching just the right amount as she went through the door”). I don’t expect older Star Trek to be 21st-century-level woke, exactly, but stuff like this just does not bode well when you’re less than 10 percent of the way through the book.

So the Enterprise moseys on over to Alnath II and we meet our Annoying Civilian of the Week, an Andorian archaeologist named Threllvon-da. (Unlike Ian Braithewaite, he’s just a garden-variety bloviator. Most of his complaints have to do with his digging equipment and why he can’t have access to it.) While the crew tries to figure out how to blame the Vulcans’ deaths on the Klingons that have posted up in the neighborhood, everybody starts acting really weird and out-of-character.

Kirk becomes cripplingly indecisive and frets over simple command decisions. Spock becomes disgruntled with human behavior and loses control of his emotions (he gets in a wonderfully snippy jab at Uhura at one point, telling her “Excuses are for incompetents”). McCoy fills his lab with plants and yearns to get back to nature and away from all those infernal machines. Scotty and his assistant Heather McConel (a.k.a. Pretty Much Just Female Scotty) strip the ship for parts in order to make negligible improvements to the already perfect warp engines. Chekov gets an itchy trigger finger to go along with his already pretty baldfaced racism towards Klingons, both of which almost get everyone killed when Kirk leaves him the conn in a kind (if misguided) attempt to give him solid real-world experience. Elsewhere about the ship, most unnamed crewmembers behave in some general combination of horny, drunk, and/or aggressive, and most of the women are hot for some dude; Uhura moons over M’Benga while Lt. Avitts and Nurse Chapel catfight over Spock.

All this funky behavior might be a real problem if the Klingons had their heads screwed on any tighter than our brave crew, but they don’t. In fact, after a while you start to wonder why this book is called The Klingon Gambit, because they don’t appear to have any major tricks up their sleeves, nor are they necessarily two steps ahead of every move the Enterprise makes. They just want the planet’s topaline (an element used in life support systems) and to mutiny their way into their own captain’s chair. The Klingons are actually the least of the Enterprise’s worries in this book; the Enterprise crew is more liable to be tanked by its own self-destruction than by the goofball villains presented here.

So everyone runs around all out of sorts for a good long time. And they keep going on like that … and they keep on … and they keep on … and you start reaching that home stretch and getting mighty nervous about how things are going to wrap up. Because you probably noticed this, but The Klingon Gambit is a short, short book, clocking in at only 158 pages. (I’m tempted to call it a novella.) In some ways, that’s a mercy—The Klingon Gambit is unfortunately not terribly compelling overall, so it’s good that it doesn’t get too much of a chance to wear out its welcome. But there are some loose ends that don’t get resolved until literally the final page of the book (e.g., why all the Vulcans died simultaneously). Somewhere in the final twenty pages or so, Kirk just sort of vaguely accepts that some external force is responsible for the weirdness, which helps him arrive at the specific cause, and subsequently strings along the rest of the crew, who haven’t figured it out yet (even Spock), until such time as he sees fit to give a smug spiel putting a neat little bow on the whole thing. And you’re just kind of left there like, “Huh. All right.”

That’s kind of the prevailing vibe the reader gets from The Klingon Gambit. The whole book just sort of … happens. I blew through it in a single day, and it was largely in one eye, out the other, starting off gunning for full-on “bad” but never quite going all the way, except in the early passages demonstrated above. It’s certainly not as bad as Star Trek books can get, as we’ll see soon enough, but good is still a distant speck on the horizon from where it stands.

Say what you will about S- and F-words, but I hope by the 23rd century we’ve moved past sex shaming.

It’s got an amusing line here and there and its brevity works slightly to its favor, but it’s not the most exciting Star Trek novel, the pacing leaves something to be desired, and it has an inaccurate title. Definitely skippable.

NEXT TIME: The Covenant of the Crown