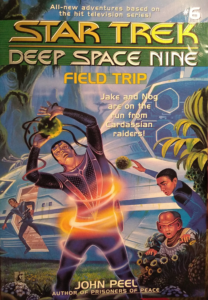 This week, when Keiko promises Sisko her class’s field trip to the Gamma Quadrant will be totally safe, it’s almost as if she’s never seen Star Trek. But when a Cardassian attack forces an emergency landing, Jake’s Bigfoot sighting might be the thing that saves them all. How much say does the senior staff have in Keiko’s curriculum? How badly are the YA books and the show going to de-sync? And is Nog the big mood of 2021? All this and more in Field Trip, the book that remembers a more innocent time.

Ahh, the field trip. One of the most fondly remembered grade school traditions, as well as one of the most exciting days of a given school year. And although Deep Space Nine has a relatively anchored setting compared to the rest of Star Trek, the concept is particularly intriguing against the backdrop of space, where the possibilities for destinations are limited only by an author’s imagination. John Peel has certainly proven on prior occasions that he’s got the right stuff for the young reader line; does he capture lightning in a bottle twice, or is this a sophomore slump?

At first, Keiko resists the class’s pleas for a field trip, but soon starts to come around on the idea. Assuring Sisko of the children’s complete safety, she chooses Cetus Beta, a planet not too far on the other side of the wormhole with tons of plant life and no recorded animal species. Seems harmless enough. But when they get there, their runabout gets shot down by Cardassian raiders behaving rather erratically. Forced to make an emergency landing, Keiko and the children must survive using only their wits and their tricorders.

Soon enough, however, they lose even the latter. When they return to the runabout for supplies, someone has stripped it of all the electronics. Jake swears he sees someone at the scene, but the tricorders register no other life besides the students. While they sleep, the unidentified thief makes off with their tricorders. Using an electronic baseball game Benjamin gave him as bait, they devise a trap and snare the sticky-fingered burglar. His name is Lek, a member of a species called the Trofar. The Cardassians enslaved the Trofars and filled them with electronic implants that make them undetectable to sensors, intending to use them as scouts and spies. Now, having escaped, they must scavenge parts to build implants for their forthcoming newborns, who will die without them. Teaming up with Lek looks like the only way Jake and his friends can get home…

That all may sound like a lot happening, but it doesn’t feel like much when it comes to the actual reading. Real estate is tight in these books, so the action needs to get flowing pretty quickly. But they don’t leave the station until nearly a third of the way in, and there’s plenty of plodding planetside as well. The climax, such as it is, is quick and dirty, taking place over only about four pages. Pacing issues definitely plague this one, so I hope you enjoy standing by waiting for things to happen more than things actually happening.

Field Trip is also overstuffed with characters, resulting in several of them being underutilized. This even extends, unfortunately, to the core quartet. T’Ara and Ashley, introduced in Prisoners of Peace, gave Jake and Nog a pair of refreshing female foils, rounded out the peer group nicely, and brought varied viewpoints and talents to the table, but their presence is little more than incidental here. Lieutenant Danvers, the runabout pilot (read: bus driver), has a sour outlook on children that could have provided an interesting edge, but he’s pretty much entirely out of commission after the crash. The attempt to work Keiko more into the mix is laudable, but she’s tied up with Danvers after he gets injured and contributes a heroic amateur medical effort, but little outside of that other than some mild hand-wringing.

In the end, Field Trip is as light as Prisoners of Peace was heavy, mostly to its detriment. You can see some of the dark edge that prior book had in the story of the Trofars, but that’s offset somewhat by the fact that Lek is basically a big Ewok that talks like Yoda. Much like last week’s book, funnily enough, there’s somehow both a lot going on and not very much at the same time, although thankfully that issue is confined to a much smaller space here. Two zingers in a row on the kids’ books is a pretty big ask, so it’s not terribly surprising that this one’s a bit of a dud. I didn’t hate it, but it’s far from the best Peel has shown us he can do.

I don’t want to call Field Trip bad, but it’s just sort of unavoidable that it is. The pacing issues give it a slapdash feel, and there are too many characters with not enough to do. Real action is in short supply, and although sitting and thinking is a strong suit for Star Trek, it’s not too compelling the way it’s executed here, or for most children in general (although maybe for the kind who’d be into Star Trek anyway—but I digress). I know Prisoners of Peace is a tough act to follow, but I had hoped a follow-up would at least get closer to its level of quality than this did.

NEXT TIME: Bashir goes beyond all in in The Laertian Gamble