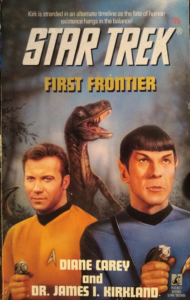 This week, an experiment gone wrong sends the Enterprise back to when dinosaurs ruled the earth. But when they discover that this Earth got through puberty without a crater face, it’s off to the Guardian of Forever to set right what once didn’t go wrong. What does an injured Captain Kirk bring to a story’s table? Are Starfleet officers aware of what they’re signing up for? Is Diane Carey, for that matter? All this and more in First Frontier, the book that doesn’t go as all in as you would hope.

It’s difficult to overstate how ubiquitous dinosaurs were in popular culture in the 1990s. Once Jurassic Park ran roughshod over the box office and melted moviegoers’ faces, history’s most fearsome reptiles became nigh inescapable. This was especially true in children’s media, where cartoons and live-action productions ruled the airwaves in equal measure. One of the lead characters on one of the most popular sitcoms of the day was a paleontologist. Bill Watterson actually backed off of drawing them in Calvin and Hobbes for a while in the wake of Jurassic Park, fearing his renderings hopelessly antiquated next to movie magic. Those are just a few examples off the top of my head from the tip of a very large iceberg.

Now, thanks to this project, I learn that even Star Trek got in on the prehistoric action. But if it’s the dinosaurs you’re here for, however, you’re going to be waiting a while to get to the fireworks factory. And even then, First Frontier isn’t really about dinosaurs so much as power struggles between alternate-timeline Klingons, Romulans, and Vulcans, which to be perfectly frank was not what I was here for. While I’m hesitant to slam a book for not being what I personally wanted it to be—that’s neither the fault nor the responsibility of the book or the author—I’d be lying if I said I wasn’t hoping this was going to be a gleefully stoopid romp. But before we get too far ahead of ourselves, let’s roll into the usual plot recap.

While testing some experimental new shields, the Enterprise gets too close to a blue giant and passes through an accretion disk to a brave new universe—one where the Klingons and Romulans have annihilated countless other species and are left with basically only each other to artlessly pummel the gagh out of, and where no one appears to have heard of either Earth or the Federation. A trip to Terra reveals the same old geography, but no familiar landmarks or traces of human development. Unsurprisingly, it’s Spock who eventually connects the dots, arriving at the realization that in this timeline, the asteroid that led to the dinosaurs’ extinction never struck Earth, which means that mammals never had a chance to gain a foothold on the evolutionary ladder and become the planet’s dominant life form, and thus the Federation never rose to bring balance, law, and order to the galaxy.

After picking up a couple of disgraced Klingon kamikaze pilots, they head to the one constant in the universe, the Guardian of Forever, to jump back to the point before the asteroid struck, figure out why it didn’t happen, and make it happen. While they’re there, the Enterprise is destroyed in battle, leaving only Kirk, Spock, Bones, and a couple of scientists and security guards as the last humans remaining in the universe. Before they get taken out in similar fashion, they jump through the portal at the last common point in the two Earths’ pasts, 65 million some-odd years ago, and must survive the ravages of the Terran jungle—and, in Kirk’s case, a debilitating leg injury he spends the entire book refusing to properly treat—to make that asteroid strike happen.

For a book that’s nearly 400 pages long—for a Star Trek novel, practically a doorstopper—there is somehow simultaneously too much going on and not enough. The book starts with an exciting prologue that immediately introduces the dino characters, who are based on the Troodon, a species once thought to have potentially had a puncher’s chance of developing intelligence were it not for the extinction event. But after a strong introduction, it’s nearly three hundred pages before we meet them again. Everything that happens in-between drags on several pages longer than it needs to. I understand that Carey is a name that got readers excited and sold books, but she or someone else seems to have believed that that made her somehow editor-proof, and that is a misapprehension that does quite a bit of damage to this book.

Another significant contributor to that damage is Kirk himself. Kirk begs off properly treating a bite from a “hairy thrillkiller scorpion”, and if Dr. McCoy thinks that obstinacy is frustrating, he should try reading about it from the vantage point of someone living in a country with garbage healthcare who can barely even conceive of the kind of easy fix 23rd-century medicine can offer. Would it kill Kirk to take a hypo and get six hours of sleep? Would it make him look like any less brave to his crew? This conflict exists for no justifiable reason and brings nothing of substance to the table. But because of this artificial source of conflict that could be easily solved if not for petulant behavior, we have to watch Kirk limp around and gripe at everybody for 400 pages. He even tells Spock to get some rest at one point. The nerve! Captain, heal thyself.

Kirk also exhibits an inconsistent knowledge of science. For the most part, his officers pretty much have to stop just short of breaking out hand puppets to walk him through most concepts. He has no idea that an asteroid strike killed the dinosaurs, a gap in general knowledge that literally makes other characters react, correctly, with incredulity. But when the landing party needs to create explosives, he suddenly knows every material they need and every potential chemical reaction those materials can create. Also, whether because of the injury or because he woke up on the wrong side of his quarters or who knows what, Kirk is extremely irritable and hostile, always snapping at this or that person and wearing his impatience on his sleeve. Thoroughly unpleasant characters aren’t unwelcome, but generally speaking, it’s better when those characters aren’t the captain of the side you’re supposed to be rooting for.

And of course, as I’ve touched on, the dinosaur material is completely wasted. I was hoping for something like the Enterprise crew being thrust into a situation where they have to work alongside a dinosauroid crew to achieve some common goal, but what I actually got had a decidedly more bitter flavor. The story ultimately serves only to assert the primacy of Earth and the Federation and their dire necessity to the balance of the cosmos, and this is an awful lot of felled trees to support such a frankly dismal point. The idea of the dinosauroids constantly destroying themselves with nuclear war every time they reach that technological advance is harrowing and conveyed well, and I like the idea that they need to overcome their innate brutality to succeed on the galactic stage, but in the end they turn out to be nothing more than Earth dinosaurs transplanted by the Preservers to a different planet who are mad at the Federation for not allowing them to expand as aggressively as they want and who must be punished for refusing to meekly bend the knee to human and mammalian supremacy. After reams of boring stuff about Klingons and Romulans destroying everyone in the galaxy before finally turning on each other, it’s more than a bit of a downer.

If anything, First Frontier is a good reminder to keep one’s expectations for Star Trek literature low to middling. I allowed myself to get really excited about this premise, hoping that it would result in some entertaining Season Three-esque shenanigans, but it took itself way too seriously and got sidetracked with a bunch of things that weren’t exciting as the initial promise, and as a result I’m way more disappointed than I probably would have been otherwise. If a book is going to be this long with print this small, it has a lot of work to do to maintain a baseline level of excitement, and boy howdy, this book was not up to that task.

Bad. If I had been aware of this book when I was eleven or twelve, I probably would have thought it was the coolest thing in the world. Star Trek? Dinosaurs? How can you lose? Pretty easily, it turns out. This could have been a lot of fun, but it really loses its way after a strong introduction, getting mired down in uninteresting Klingon/Romulan alternate history and constantly re-upping on a deeply unlikable rendering of Kirk. This is as juicy a premise as any Trek author has ever come up with, and it’s sad to see it go to such protracted and dull waste.

NEXT TIME: Keiko’s class goes on a Field Trip