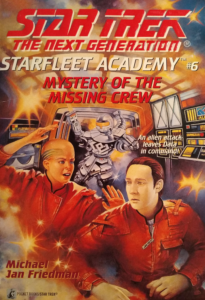 This week, as Data makes his way to Starfleet Academy, he finds that some birds of a feather really like to flock together. But when the adults vanish and the robo death squad moves in, they’ll have to learn to do group work among more than just themselves. Will Data rise above peer pressure? Can his new friends even join the Federation? And how long can the streak of fun about-the-author paragraphs last? All this and more in Mystery of the Missing Crew, the book that solves the mystery of the missing crew.

Previously, we’ve gotten to look in on Geordi’s and Worf’s time at Starfleet Academy. Now we move on to Data, although strictly speaking, this is not technically a Starfleet Academy story. It actually takes place en route to the Academy, giving Data a taste of the action-packed cadet life before he even sets foot in a classroom.

Life aboard the Tripoli isn’t so bad, all things considered, but Captain Thorsson (not to be confused with Colonel Thorsen) thinks Data might get better answers to some of his more philosophical quandaries by enrolling at Starfleet Academy. And so, after three years of civilian life, Data heads to school on the Yosemite. He’s joined by a group from a species called the Yann, genetically identical clones who “derive comfort and confidence from one another’s presence.” Starfleet has accepted four of them—Sinna, Odril, Lagon, and Felai—in an attempt to encourage Yannora’s entry into interstellar relations. Data tries to break the ice with little success—they far prefer their own company to anyone else’s—but Sinna, the group’s lone girl, makes a genuine effort to reach out.

During a yellow alert, the entire crew disappears except for Data and the Yann, and the ship is attacked and reduced to battery power. The aggressors demand that the Yosemite scram, but before Data and the Yann can cobble together a weaponized response, they beam over a cadre of three-armed, three-legged attack robots. After neutralizing that threat with some well-placed increased gravity, Data surmises that their opponents may be bluffing about their firepower and may in fact be stuck in the same boat as them. As the de facto guy in charge, he must come up with a way to get both crews out of the jam while sticking to his guns and avoiding capitulating to far less satisfactory suggestions from his impatient new friends.

On paper, Data looks to me to be the best TNG candidate for this series. He’s arguably the best character for pulling in casual fans, and you don’t have to mentally de-age him to achieve full immersion. Unfortunately, however, this one’s pretty dry and just kind of there. That said, it does manage to pack in a lot of good lessons for the young’uns. Data experiences peer pressure, trying to make decisions based on his own sense of right and wrong while being urged to act more swiftly. In the process, he teaches Sinna a number of lessons: the value of thinking for oneself, sticking to one’s guns, and the strength of every individual’s uniqueness—IDIC, everybody bringing something different to the table, etc.

A few tossed-in bits of lore (no, not him) do a little bit to make the opening parts of the book interesting, but overall there’s barely anything to talk about with this one. In a way, that kind of makes it of a piece with Requiem, the novel we covered recently where Picard got launched back in time to Cestus III days before the colony was massacred by the Gorn. It seems that around this time Friedman is pumping out really lean material with very few solid footholds for strong analysis. That’s a shame, because I really like to be able to sink my teeth into these books. Makes it a lot harder to do what I do when they dissolve like marshmallow fluff.

I’ve long wondered when the day would come when one of these reviews clocked in at less than a thousand words. Looks like that day is finally here. Mystery of the Missing Crew is fine, but there just isn’t a lot to grab onto here. A few obligatory lessons emerge from the way Data tackles the situation pretty much entirely on his own, but the events of the story, with a few minor exceptions, are not that thrilling, and you start forgetting it before it’s even over.

NEXT TIME: The crew of Proud Helios gives DS9 a headache