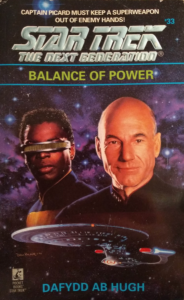 This week, when a scientist of questionable repute dies, the powers of the galaxy race to bid on his creations. But when Wesley stumbles on a way to make gold-pressed latinum grow on trees, the invention falls into the hands of the last people you’d want that sort of thing to. What is Geordi’s major malfunction? Can we break the Bing Klingon translator? And has Data been running a long con this whole time? All this and more in Balance of Power, the book that dirties up nicely.

Geordi is on Kurn’s ship performing a retrofit when he receives news that his “mentor” Dr. Zorka has died. Geordi considers the dude a quack, but that seems to be a minority opinion, because Zorka’s son, a failed artist, is auctioning off his old man’s inventions and field notes to fill his own coffers with project funds, and everyone from the Federation to the Klingon Empire to the Cardassians is interested. Picard, who has been tapped to bid on select items on the Federation’s behalf, invites Geordi to discuss the letter’s misgivings about Zorka in private, but Geordi can’t show any receipts, so Picard has no choice but to accept the request and set course for the auction site.

Meanwhile, back at the Academy, Wesley Crusher has been on a steady diet of humble pie ever since The Incident. He’s not too thrilled with his roommate situation either: Fred Kimbal is nice enough and has a good head for numbers, but he’s a complete dud in the social department, and practically no one considers him officer material. But Wesley thinks their luck might turn around when they get invited to buy in to the annual end-of-term poker game. Prior to the game, Wes tinkers with an abandoned project of Fred’s. When he gets it working, he discovers it can turn a cheap metal called chaseum into gold-pressed latinum—or at least, a facsimile so close to the real thing that only the most powerful instruments can work out the difference.

The Ferengi hosting the game, Tunk, takes advantage of Fred’s good-natured obliviousness to the tune of about twenty bars of latinum, a debt Fred pays by turning over the counterfeit-latinum producer. Appalled that Fred would consider that an option and horrified by the logical conclusions of what a Ferengi would do with such a device, he attempts to sneak aboard Tunk’s yacht to steal the device back, but is caught and conscripted into service as the ship’s cabin boy. Tunk and his father, Munk, a roving pirate and persona non grata in the Ferengi business community, are headed for the same destination as everyone else in the galaxy, with the plan to crush all other bidders’ hopes with their inexplicable largesse, particularly those of a certain Grand Nagus. Wesley must figure out how to get the device out of their clutches before they clean out the auction and get their hands on some potentially devastating inventions.

I am on record as being a vehement un-fan of Dafydd ab Hugh’s first Trek novel Fallen Heroes (a position I continue to stand behind), but I liked this one as much as I disliked that one. The most noticeable element of Balance of Power is the thick coat of DS9-flavored grime that coats this particular rendering of the TNG universe. People tend to get weird about the presence and use of money on the TNG side of Trek, mostly because of that one misbegotten yet somehow also widely misinterpreted line from First Contact, but I think it’s interesting to force them to work with it. I’m both surprised and not that TNG wears this messiness well; it’s often a little too squeaky-clean for its own good, and it’s fun to watch the characters play around in a sandbox that allows them to loosen their collars a little bit.

Picard and Geordi may be the characters on the cover, but this is resolutely a Wesley story, a very strong portrait of where his heart is at in season 7 right around the time the Traveler comes and picks him up for the ultimate road trip. In general, Wesley Crusher is a better character when he’s in a mess that he can’t just engineer or math his way out of. He also benefits handsomely by comparison to a naif like Fred Kimbal, which makes him look like a much more well–put-together person and not so much a know-it-all stuffed shirt. The piece of Wesley’s inner thought process that Balance of Power adds to the puzzle fits in very comfortably, and the ending in particular feels like it really solidifies in his mind that he’s making the right decision by leaving Starfleet behind for his own path.

One thing I was afraid of with this book was the prospect of it descending into farce once it got into the thick of the auction proceedings, sort of like a How Much for Just the Planet?–lite. Various characters get shuffled around in their alliances and end up representing—e.g., Picard ends up getting asked to bid on behalf of the Klingon Empire, Deanna Troi gets roped into bidding for Betazed, Worf and Data at various points represent the Federation, etc. Except for one notable event, nothing too wacky happens, and I’m glad that Hugh was able to show restraint and not allow the book to spiral. One distinction I think a lot of people don’t make when it comes to Star Trek is that it can do humor well, but not comedy. Balance of Power features lots of humor and stays away from the comedy, a move that’s always beneficial to Trek.

As we move out of the era of TNG’s televised run and get farther out in time from things that held the series back, like excessive involvement from Roddenberry, I think we’re well on our way to seeing more authors get a little more down and dirty with it, and based on Balance of Power, I have to say I’m looking forward to it. There are times I think we may have gotten too jaded to be able to create something like TNG today, but I also think there’s something to be said for tempering it with some more realistic lines of thought. There are a lot of ways this book could have gone wrong, and it’s a pleasure to report that it avoids all of them nimbly.

As it turns out, a greasy layer of splickety-splack does TNG a world of good. It’s an excellent portrait of Wesley on the cusp of his Academy exodus, one that captures the character in a particularly excellent light. The book is also funny without ever capitulating to some of Star Trek‘s worse tendencies with regard to comedy. What’s the opposite of a sophomore slump? Because this is about as much that as you can get. Nice to see the first book of a new year take top honors.

NEXT TIME: Data solves the Mystery of the Missing Crew