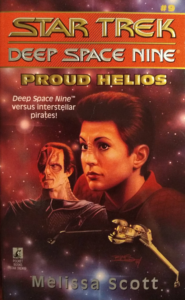 This week, when a ragtag band of pirates puts one over on the Cardassians, Dukat doesn’t care what he has to do to stop them. But when Diva Plavalaguna turns out to have some surprising haggling bona fides, there could be danger to DS9 from inside and outside. How many kinds of spiders does Bajor have? What’s the worst episode of season one? And why is everyone picking on Julian? All this and more in Proud Helios, the book that resembles its subject a little too closely.

The station receives a distress call from the Gift of Flight, a ship piloted by an amphibious race called the Xawe. Although Kira and Bashir make best speed in the Ganges, they can’t catch up before the Gift’s assailants lay waste to it. The attacking ship is the Helios, a pirate vessel that’s attacked 42 other ships in the last five years, though probably no one cared because they were mostly Cardassian and Ferengi vessels. Now that they’re dipping a toe in Federation space, however, it’s a problem! The Helios seems pretty beaten up—speculation has it they may be looking to plunder parts—but remains a worthy adversary even in its shoddy condition.

Meanwhile, a heavily veiled Trehanna widow named Diaadul boards the station, bound by duty to finish her late husband’s business with Quark. Feeling an instinctive protectiveness toward her, Odo tries to dissuade her from a one-on-one transaction with the Ferengi, but the way she manhandles Quark proves Odo’s misgivings misguided. Odo increases his surveillance on Diaadul and gets Sisko’s permission to include Major Kira in the operation. When Diaadul moves to rendezvous with a couple of smugglers, Kira engages pursuit, but her foolishly aggro approach gets her captured along with Chief O’Brien, both of with whom Diaadul absconds to the Helios, on which she serves in some sort of first mate-ish capacity.

The captain of the Helios, Demaree Kolovzon, puts O’Brien to work repairing the severe damage to the ship, which at this point may be too extensive for even for O’Brien’s considerable talents to salvage. But while Sisko tries to work out how to get his two senior officers back, Gul Dukat closes in on the station with orders to destroy the Helios, and is prepared to construe any interference on DS9’s part as an act of war. Sisko thus faces a triple threat: stop the Helios, get Kira and O’Brien safely off of it, and prevent an interstellar incident. Easy-peasy!

Proud Helios is one of only two Trek novels written by Melissa Scott, so unfortunately, we don’t get to pull the “one-and-done author” tag out of mothballs. She’s an award-winning sci-fi author who’s been much more prolific in the Stargate televised universe (seven tie-in novels there) and with her own original material. The SFE entry linked above makes no mention whatsoever of her pair of Trek works, which some might interpret as an omen. That would give you an accurate his particular book, much like the ship that gives it its title, is a bit of a mess. I might have used the word ramshackle to describe it, except that word implies a sort of charm that is absent from these pages.

Proud Helios is extremely bog-standard, about as plain as you could imagine a space pirate story being. Scott speaks of editor John Ordover in Voyages of Imagination as promising to himself that he wouldn’t take any space pirate stories, and judging by how this one turned out, it’s a promise he shouldn’t have reneged on. It was also, as I’ve noted before, a pet peeve of the Great Bird himself. Not all of Roddenberry’s ideas were good ones, but each successive space pirate episode and novel that falls flat on its face confirms anew that laying down a mandate against them was one of them.

Interpersonal dynamics are a major problem for this book. Some are not fully explored, an issue that plagues basically the entire Helios crew; there’s no clear sense of why these people work together or what brought them into each other’s orbits. With some, the reader is expected to buy in to a degree of lived-in–ness that doesn’t feel earned, like with the smugglers Mohrlein and Tama, who have some kind of ill-defined familiarity with Odo that predates the Federation presence on the station. Others still are flatly misrepresented. Bashir is everyone’s whipping boy for the first half of the book, and though he was kind of annoying in the early seasons, it certainly wasn’t to the extent this story suggests, and nothing he does or says merits how badly he’s treated.

A few other tweaks would have helped somewhat. A stronger sense of Trehanna culture would have benefited Diaadul and Kolovzon, and it’s always rough when a book is still scrambling to put a tidy bow on everything with only a dozen or so pages remaining. But nothing could have helped it more than simply not being so dull. I found it hard to want to pick up this book, and harder still to remember things that had happened in it when I did manage to muster that desire. It often feels like a B-plot was being asked to cover a whole novel. Some B-plots might have been up to that task, but not this one.

Once again, Roddenberry’s directive to avoid tales of space pirates would have done well to have been heeded. Although it’s full of underexplored and oddly rendered character relationships and badly rushes its final act, its biggest problem is simply being deadly dull. There’s nothing here to make you want to pick up the book and little worth remembering if you do finish it. Hopefully Scott’s other Trek novel, the 1997 Voyager story The Garden, is a little less dire.

NEXT TIME: The Caretaker seeks a new body