In Movie and Episode Novelizations, VOY 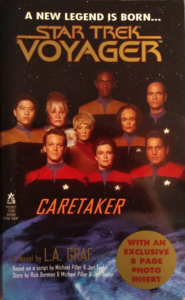 This week, when Captain Janeway worries that her chief of security has gone MIA, the search lands her ship clear on the other side of the galaxy. But as she struggles to find an easy way home, it becomes distressingly apparent that not even a two-parter may be enough to fix everything. Who do early writers perceive as Voyager‘s main character? Is Voyager’s entire stay in the Delta Quadrant Starfleet’s fault? And can I learn to stop worrying and love the Neelix? All this and more in Caretaker, the book that takes time to honor its fallen.

Caretaker
Author: L.A. Graf
Pages: 278
Published: February 1995
Timeline: Concurrent with season 3 of DS9
Prerequisites: None, although a baseline familiarity with the Federation/Maquis dynamic is good to have

It’s always an exciting day whenever I get to add a new parent category to Deep Space Spines. That’s right, we now have four series under our purview, the latest of which of course is Star Trek Voyager, which aired on UPN from 1995 to 2001, helping launch the syndicated network as its crown jewel. Yes, believe it or not, kids, there was a time when the promise of a new Star Trek series was enough to get people excited for an entire new television station. Heady days, those were. Anyway, my overall memory of Voyager going into the pilot is a little better than it was compared to the same point for Deep Space Nine, and what I remember generally about it is that it often had a tendency to get a little, uh, wacky. Was it like that from its inception, though?

Star Trek Voyager asks “What would you be like if you got lost in space?”, a question put forth by countless other works of science fiction (e.g., Lost in Space) and Caretaker is the 90-minute and/or 300-page setup for that premise. Captain Kathryn Janeway hasn’t received a report from her chief of security Tuvok, who’s undercover on a Maquis ship, in six days, and she wants to get him back. To aid in the retrieval, she enlists the services of a felon named Tom Paris, who served on that ship and has bad blood with its captain, Chakotay. Paris’s official designation is as an “observer”, to be cut loose as soon as the mission ends and not a nanosecond later.

Of course, as you might guess, that mission isn’t ending as soon as either of them thinks. While looking for the Maquis ship in the tumultuous area of space known as the Badlands, Voyager encounters the same phenomena that the Maquis did, a coherent tetryon beam and a displacement wave. Attempts to disperse the wave fail, and when Voyager makes impact, the toll is brutal: not only has it suffered severe damage and numerous casualties, including the loss of its first officer and all of its medical staff, it’s also been knocked 70,000 light years off course, placing it smack in the middle of the galaxy’s most unexplored wilderness, the Delta Quadrant.

The entity responsible for dragging Voyager across the galaxy is the Caretaker, who is in imminent danger of dying and seeks compatible bodies to procreate with so it can bear a child who will continue its life’s work of repaying its “debt” to the Ocampa. See, the Caretaker made an oopsie that resulted in destroying their atmosphere’s ability to produce water, and compensated them by setting them up in a comfortable subterranean city and providing it energy at regular intervals. All well and good for them, but where does that leave the planet’s other sentient race, the Kazon-Ogla? Scorching in the sun, hardened by the barren wastes into bitter warriors with nothing to lose. After mounting a rescue of one of her crew members and one of Chakotay’s, the Caretaker dies, and Janeway makes the tough decision to destroy his array rather than use it to get home so that the Kazon can’t turn it against the Ocampa. Despite being stranded in the Delta Quadrant, Janeway remains optimistic that her new patchwork crew can find a different way home.

Except for a handful of additional scenes, Caretaker the book isn’t much different than its televised counterpart, which is fine, because “Caretaker” is a perfectly cromulent pilot, and barring the chance of a writer getting bored and sucking all the energy out of a book because of it, the quality of an episode usually translates more or less intact to the page. I enjoyed “Caretaker” quite a bit; on a personal spectrum of Star Trek pilots, I’d put it  slightly below “Emissary” but way ahead of “Encounter at Farpoint”. Both the episode and the book chug along at a nice clip, and I was surprised by how much material they crammed into the duration.1Compressing the plot summary into the usual three paragraphs actually took multiple starts from scratch.

One key tonal difference worth pointing out is that the book tends to take on Tom Paris’s point of view whenever possible. It’s fascinating that he’s who L.A. Graf sort of zeroed in on as the character of primary interest, and to be fair, he is at least academically interesting, seeing as how he’s basically Nick Locarno in all but name, even down to being played by the same actor. But it does have a kind of unfortunate (though I do believe unintentional) effect of stealing a little of the thunder from the novelty of the franchise’s first female captain. There are also plenty of other characters I personally find more interesting and entertaining than Paris: Tuvok, the Emergency Medical Hologram, even (God help me) Neelix. It doesn’t drag down the book significantly, however—just something worth nothing.

If I’m being totally honest, I’ve been a little worried about dipping a toe in Voyager. I remember it can and does regularly get stoopid with two O’s, and I’ve seen plenty of comments out in various places that corroborate that. But every Trek series has done that countless times, and anyway, Caretaker is undeniably solid and gets me in the right headspace to get hyped for more Delta Quadrant shenanigans. And ultimately, isn’t that what a good pilot is supposed to do?

Caretaker sets the stage for the fourth pillar of classic Trek with style, élan, and a lot more plot than I would have guessed could fit comfortably into 90 minutes. The book translates the episode’s vibe pretty faithfully, and though its inordinate focus on Tom Paris is a little bit of a headscratcher, it’s not that big a deal, and the book’s few extra scenes are well worth the price of admission. Like any good pilot, it gets you excited about the potential of what’s to come, and you can’t ask for much more than that.

NEXT TIME: The Lost Years saga concludes with Recovery