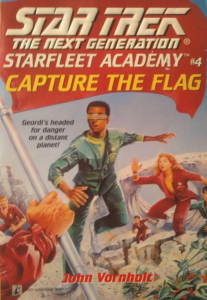 This week, Geordi’s underdog dodgeball win may earn him an over-the-head wedgie. But when he shows a talent for Simon Says, he’s saddled with the responsibility of squeezing a tactical victory out of a band of ragtag misfits. Which races should appear more in Star Trek? Why would having a Vulcan on your team be a liability? And did everyone on the Enterprise talk to Boothby at some point? All this and more in Capture the Flag, the book that isn’t terribly interested in subtle villain names.

All cadets at Starfleet Academy have their own different fears. Geordi La Forge’s is [record scratch] gym class?!? I’m sorry, these “adult conceptions of kid fears” narrative hooks will never not be funny to me. But of course, we know by now that even the younger-skewing Trek books have bigger philosophical fish to fry. And even the gym issue is not totally cut-and-dry: Geordi isn’t unathletic, per se—he just gets picked last or close to it a lot because his VISOR is seen more as a handicap than a benefit. Nevertheless, he ekes out a win in dodgeball, earning the ire of a cadet named (in rather on-the-nose fashion) Jack Pettey.

Lt. Pantano informs the group that every year, she takes her top freshman gym class on a little trip by starship to the planet Saffair, an uninhabited world with half Earth’s gravity, where they’ll engage in wilderness training and tactical exercises. En route, the class is given orders not to leave Deck Three for any reason. Several of them goof it up during a simulated red alert, but Geordi’s calm disposition, logical reasoning, and leadership in a tense situation get him named one of the four team captains for the game they’ll be playing on Saffair, which, just in case you haven’t figured out what it is yet, is: freeze tag. Just kidding! It’s Capture the Flag, of course.

Geordi, ever the upstanding dude, uses his captaincy to choose teammates who would normally be mocked and ignored. He assembles quite the motley crew: a Vulcan girl named T’Lara; a shy Andorian named Altos; another friend from gym, Jenna Pico; Kareem Talo, a Neo-Pygmy he befriends the morning they depart for Saffair; Megan Craycroft, an albino girl; a Tellarite, Zemusta; and a small Saurian named Vernok. They don’t look like much, but they’re well-rounded enough to sink the Red team’s pure-aggro strategy in short order. But the real test will be against the Gold team and their captain: Jack Pettey.

Capture the Flag‘s lessons are straightforward and simple, yet powerful. Naturally, with Geordi at the forefront, you can bet you’re going to learn that qualities that seem like liabilities on the surface can actually be assets, but it’s not reflected in him. His entire team is an object lesson in that idea. Besides being blind, there are rays of hope in this book for anyone who ever felt down because they thought they were too short, too tall, too quiet, too loud, too shy, too unemotional, too weird—on and on. There are lots of underdog stories out there, but this is an especially satisfying one.

The book also stresses the value of showing kindness to everyone, even your enemies. Looking around in 2020, it’s so hard to conceive of this as a realistic ideal, but it’s so important. I don’t think I’m going to upset anyone too terribly by spoiling that Geordi wins Jack Pettey over in the end. You read it, and it seems so pat, too easy. Like one game of Capture the Flag is really gonna make some jerk’s entire outlook do an instant 180. But what makes the world of Star Trek so enticing is that it dares to imagine a best-case scenario that seems unattainable from where we’re standing, and it dares to invite us to lay the ground work for it by doing those things now. And it’s especially vital that those lessons appear in the books that are targeted twoard kids, who are nothing if not the future.

Last but certainly not least is the book’s celebration of diversity, one of the literary branch’s strongest and most varied groups yet. Very few Trek novels, adult- or youth-oriented, showcase a group of characters that so fully embodies IDIC without explicitly invoking the credo. When a writer really commits to that idea, it opens up so many cool storytelling possibilities, and there were several moments during Capture the Flag when I was really impressed with how it all came together. I think a lot of folks might have trouble considering even the best of the young-reader books essential, but this one was absolutely outstanding.

I strongly recommend Capture the Flag. This is what you really want from these Starfleet Academy books, I reckon: the action is low-stakes but there’s lots of it, and John Vornholt managed, I think, to identify the kinds of lessons that the young and impressionable really need to hear and take to heart. This is the best of the Starfleet Academy novels by far so far, and it’s set a high bar for future ones to clear.

NEXT TIME: Those curious about Q-Squared should in-“squire” within