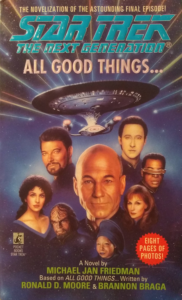 This week, Jean-Luc Picard has come unstuck in time, and he’ll have to learn how to control the quantum leaps if he hopes to clean up a puddle of anti-time he spilled. But when he smells an omnipotent rat, everyone’s favorite trickster shows up right on Q to deliver humanity’s progress report. Did Mr. Mot accidentally save the universe? Did Miles and Keiko have the worst meet cute ever? And just what the heck did Picard do to that poodle? All this and more in All Good Things…, the book that wants its own piece of the Light.

Less than a month ago, Star Trek celebrated the 25th anniversary of what is still, even to this day, its strongest series finale. “All Good Things…” is a lovely book end, a well-earned victory lap, and a beautiful celebration of all the memorable elements and characters and performances that contributed to making Star Trek: The Next Generation arguably the most widely beloved piece of the franchise. A novelization of such a grand episode has a lot to live up to. And who better to rise to the occasion than the person who most recently wrote a novel that outdid its source material?

Yes, Michael Jan Friedman is on hand to cover TV-to-book duty once more. As before, he nails down the basics: Picard stumbles out of his quarters and rambles to a besotted Worf and Deanna that he feels as though he’s jumping back and forth through time. A brain scan reveals a parietal lobe defect that could be a hallucination-causing condition called Irumodic syndrome, and the sensors don’t place him off the ship for any length of time. But to Picard, the leaps are all too real; he’s bouncing back and forth between the present, 25 years into the future, and the first moments after assuming command of the Enterprise, just before heading to Farpoint Station.

In the present, Admiral Nakamura informs Picard of a spatial anomaly near Devron in the Romulan Neutral Zone. Suspected that it’s connected to his temporal leaps, Picard moves to maneuver himself toward it in all three timelines, calling on friends and colleagues past and present to cash in years of trust and good will to follow his hunch. Soon he begins to suspect Q’s involvement as well, prompting the merry trickster god to appear and pass down his grand declaration: the Continuum’s trial of humanity has concluded, and humanity is to be not merely destroyed, but erased entirely from existence—and it’s apparently going to be all Picard’s fault somehow. With a little gentle nudging from Q, Picard sets about learning the secrets of the anomaly before he can be dragged away from it and humanity un-exists.

In truth, All Good Things… the book is not that much different from “All Good Things…” the episode, but what few major differences there are in the former add nicely to the richness of the latter. Many more minor characters, from sporadically recurring ones like Lwaxana Troi to one-offers like Robin Lefler, get one last extra appearance. Some of those even help fill in some gaps with regard to character motivation; for example, a one-sided conversation with the Bolian barber Mr. Mot gives Picard some inspiration on how to move forward, and Admiral Riker’s brief encounter with an old subordinate in the future timeline adds some appreciated context and inner monologue between refusing to help Picard and then later showing up out of nowhere to bail him out.

One thing I think could have been handled a bit better is the time jumps. They’re marked by wide section breaks that lack the immediacy of the episode’s smash cuts. I don’t think the narrative is so complex that it would have lost the reader to have time jumps occur without warning from one paragraph to the next. I tried mentally adjusting it this way myself and thought it produced an interesting effect. Any disorientation would have been minor enough to actually feel kind of neat; it’s a low-risk, high-reward gambit that could have paid off handsomely.

But that’s a minor complaint about a book that once again adds enough value to its parent episode to be worth checking out, showing that Relics was no fluke. All things considered, I’m prepared to call “All Good Things…” my favorite season finale of the series1A series finale is still a season finale. You know, like rectangles and squares. (yes, even over “Best of Both Worlds”),2In hindsight, it’s a real shame this episode never got its own novel. because it so perfectly distilled everything that made the show great into ninety tight minutes. But the book runs an even longer victory lap, reminding us in addition of all the other characters that maybe didn’t make the most appearances, but still left an indelible mark on the canon. It’s important to honor them too, Friedman seems to be saying. They’re all pieces of the same jigsaw puzzle, and whether it was Captain Picard or Data’s cat Spot, you’d notice if one was missing, and it wouldn’t feel right.

This week, we pay our respects to Ensign Chilton, the officer who dies in the line of duty on the Pasteur. Friedman even somewhat unnecessarily rubs it in a little later on.3“Looking behind her, [Beverly] saw that Jean-Luc, Worf, Data, Geordi, and her bridge officers—with the exception of poor Chilton—had materialized on the bridge as well.” (p. 181) She doesn’t even get a fanservice blurb! I didn’t even realize the ensign at helm in the present was Bajoran, and even she got three pages.4Pages 164 to 166. What a shame. Poor Chilton, indeed. Alas, we’ll always remember her for doing right by her family’s proud tradition of automotive technical manuals.

I strongly recommend All Good Things. Michael Jan Friedman once again builds on the foundation of an already great episode, resulting in another novelization that’s just as essential as its source material. If anything, it may even feel like even more of a finale, given that it wrangles an astounding number of obscure characters for delightful cameos that help beef up the smaller-than-usual page count.

There are in all likelihood still a few books to come that were written while the series was still going, but pretty soon we will have both feet fully in post-TNG territory, and I’m excited to see what authors come up with having the full scope of the entire series at their disposal.

NEXT TIME: Geordi and his motley crew Capture the Flag