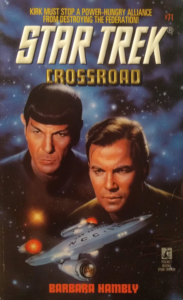 This week, the Enterprise can’t turn around: it’s in Lovecraft country. But when a ship emerges from a nebula that things more commonly go into, its crew claims the Starfleet of its time is in the pocket of Big Microchip—and one of Kirk’s crew is the CEO. So who’s the sellout? What are the real dangers to watch out for in space? And is “redshirt” actually a term used by Starfleet officers? All this and more in Crossroad, the book where Nemo is the last thing you want to find.

The Enterprise is patrolling the weird part of space, and the reports of eldritch nightmare squids called yagghorths would keep any crew’s plate full and sleep fitful. But on top of that, a ship comes out of the nearby Crossroad Nebula—one that looks remarkably like a Constitution-class starship, except it’s matte black and the serial numbers have been filed off. The Enterprise catches it in a tractor beam and snags its crew, a surprisingly diverse group led by the affable, green-haired Dylan Arios. Kirk questions them, but gets evasive non-answers until he broaches the topic of investigating their ship (called the Nautilus), which causes them to unanimously flip out.

Confined to the brig, the Nautilus crew escapes and executes as comprehensive and crippling a takeover of the Enterprise as any it’s ever suffered. Arios demands to be taken to nearby Tau Lyra III to effect repairs on the Nautilus, even though there doesn’t appear to be much there that can help with that. Spock discovers they have a yagghorth on board and figures they know of something at Tau Lyra III that will fix that. But the yagghorth is actually a friendly occupant who powers the ship’s psion drive through links with wired astrogators and specially trained empaths.

Eventually the Nautilus team reveals they’re renegades from a future timeline where a company called the Consilium uses nano-implants originally designed to stop a neurosynaptic plague to now keep the population of the galaxy under their control. Arios needs Tau Lyra III not for its material but for its people, folks of simple means but considerable psionic talent called the Yoons, whom Arios believes can help him against the Consilium. But just as Kirk wrests some control of the Enterprise back from the clever devils, a massive solar flare wipes out the entire planet. True to Arios’s fears, a Consilium ship emerges from the Crossroad Nebula not long afterward, and Kirk finds himself in the sticky wicket of potentially having to rescue people who just moments prior had his ship entirely at their mercy from an even bigger threat.

Crossroad is the last of three Trek novels, all set in TOS, written by Barbara Hambly, and it is by far, I’m happy to report, the best of them. Ishmael is anthropologically interesting, but built heavily out of a more amateurish and obvious fanservice that doesn’t pass muster under a more discerning 21st-century eye, to say nothing of its legal murkiness. Ghost-Walker is a marked improvement, and all original, with a fun discorporeal-Kirk plot á la “The Tholian Web”, but as I recall, it wasn’t quite top of the pops. No such reservations plague Crossroad, however; it rips from start to finish. It has a casual but not uncritical outlook on time travel that keeps it light without sacrificing complexity; it successfully marries Lovecraftian horror to Star Trek conceptions of alienness without getting corny or unnecessarily forcing it; and it features some of the strongest lower-decks players in a hot minute.

In the era of Arnoldian oversight, stories that focused entirely or even mostly on OCs were a no-no, so even though we’re out of those woods, it’s still surprising to see an ensign like Lao Zhiming get so much play and such a deep backstory, eclipsing junior bridge officers and even heavyweights like Bones and Scotty. I suspect Hambly gets away with it because it’s strongly counterbalanced by other elements, like the presence of an equally strong narrative thread for Nurse Chapel, of all people. Lao could reasonably be argued to be one of the two main characters of the book, making it an unexpectedly nostalgic bridge back to a different time and way of doing things, and offering a peak at a road not taken, one that suggests that stricter editorial standards and new adventures with new characters didn’t have to be mutually exclusive, and in fact could have resulted in something radically different and exciting.1It occurs to me that what I’m describing sounds an awful lot like the New Frontier novels. It may well align with other literary Trek works too, but those are what come to mind first. We’ll see how successfully they execute this idea a couple years from now.

As I said about the time travel, Hambly is thoughtful about it, but doesn’t dwell, and I was more than happy to let the book take me on its ride. For the most part, it’s a romp, but it’s also got more than a few moments of eloquent poignance. It takes place three months before the end of the five-year mission, leaving many characters wondering what to do next. One of them is revealed to be the eventual founder of the Consilium, resulting in a great twist I admit to being blindsided by thanks to some deft misdirection by Hambly. A richly expansive vocabulary—more so than you can typically expect from these books—and a penchant for expressive adjectives about color add delightfully to the flavor as well.

Barbara Hambly never wrote another Star Trek novel after Crossroad, stating in Voyages of Imagination that no series that followed riveted her as much as TOS did, which is mildly disheartening, although electing not to play in sandboxes you’re not interested in is undoubtedly a good way to keep yourself from producing mediocre, tone-deaf, and even personally unsatisfying work. That said, as long as she was going to exit the scene, you couldn’t hardly ask for a better sendoff than Crossroad. I think it’s fair to say TOS is an acquired taste, but this is one story in that universe I could even see less TOS-inclined fans enjoying. Especially if you like your aliens and alternate timelines the weirder, the better.

I strongly recommend Crossroad. Barbara Hambly’s final TOS novel is also her best, a fantastic adventure that takes time travel the correct amount of seriously and not only does a lot of things Trek authors often don’t dare to do, but does them well. With a staggering roster of intriguing original characters and a keen sense of when to go for the emotional punch, Crossroad is the rare breed of story that may even impress those less enthralled with TOS.

NEXT TIME: Bashir and Dax track down a prophesied Warchild