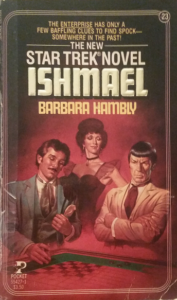 When you consider how protective (some might say possessive) today’s entertainment companies get regarding their intellectual properties, decades that can be at least semi-reasonably described as “recent” may start to look like an untamed hinterland. For instance, part of me often looks back with fondness on that roughly 15-year window where no one gave two figs about anything anyone did with Star Wars. As more and more properties come under the purview of fewer and fewer owners, it seems decreasingly likely that we will see cross-media appearances that are not planned down to the minutest legal, financial, and social media details, much less the reckless abandon of a product like Ishmael, a novel that so gleefully mixes in cameos and references from other properties that any legal team today would tear it to shreds before the first copy came off the presses.

Ishmael
Author: Barbara Hambly
Pages: 255
Published: May 1985
Timeline: During TOS; 400 years before TOS
Prerequisites: General knowledge of Here Come the Brides, a sitcom that ran on ABC for two seasons from 1968 to 1970

Before we talk about Ishmael, we should talk about Here Come the Brides.

Here Come the Brides lasted two seasons on ABC. It was loosely inspired by the exploits of Asa Mercer, who in the 1860s embarked on multiple expeditions to relocate willing women to frontier Seattle to balance the lopsided gender ratio (10:1, men to women). Although it was a sitcom, in this story the characters are not drawn broadly or particularly comedically, and in fact, Hambly’s deconstruction likely represents the deepest anyone ever thought about the show. The main connective tissue between this show and Star Trek is that Aaron Stemple, the sawmill owner, was played by Mark Lenard, who is of course better known for playing Spock’s father Sarek. Indeed, Stemple, normally the show’s antagonistic presence, is the main focus of Ishmael‘s time travel arc, and when you know these basic factoids, you can kind of envision the wheels turning in Hambly’s head and putting the pieces together.

The basic premise of HCTB is summarized in the pages of Ishmael, but bears worth reproducing here. To wit: Jason Bolt’s logging company is about to shut down because the lumberjacks want female companionship and are about to go find it somewhere else, so Bolt promises to round up some marriageable single ladies to keep them around. Aaron Stemple puts up the money for the project’s expenses (transporting the women, giving them room and board, etc.), but bets Jason Bolt that he won’t marry off one hundred women before the new year. If Stemple wins, he gets the mountain the logging company is built on, and if the Bolt brothers win, they get Stemple’s sawmill.

The nice thing about all of this (and a testament to the enduring obscurity of HCTB) is that you can be totally ignorant of all of the above information and still enjoy the story as is with only knowledge of Star Trek. Ishmael was one of the handful of Star Trek novels I read as a boy in middle school, and I didn’t know a single thing about Here Come the Brides back then and still enjoyed it and followed it just fine.

Of course, for the two shows to cross over, time travel must necessarily be involved. To get that ball rolling, the story begins with Spock doing some light solo espionage on a suspicious Klingon ship while the Enterprise is parked at Starbase 12. The ship disappears with him still on it, but not before he can send out a couple of transmissions containing cryptic hints to help Kirk figure out what happened to him. Spock falls into 1867, bumps his head, and is found and taken in by Aaron Stemple, while Kirk, McCoy, and Base Commander Kellogg try to figure out how the transmissions add up before the timeline is altered in the Klingons’ favor.

Stemple figures out pretty quickly that Spock is an alien, but luckily, he doesn’t abandon or kill him, but rather nurses him back to health at his cabin. Spock feels his only logical choice is to die, since he has no memory and no way to get back where he came from and thus nothing to live for, but Stemple convinces him to pass for human and make something of himself in Seattle. Stemple names him Ishmael Marx and tells everyone he’s his nephew from Boston who’s come out to do the accounting for the mill.

Spock doesn’t really get up to much of note in 1867 on account of his amnesia and his bum ankle; he just sort of pals around with the HCTB characters until near the end, occasionally calling Stemple out on the morally unsavory nature of the bet. Spock especially seems to see the good qualities in Biddy Cloom, whose comparative homeliness and one-way ticket to Spinsterville threaten to derail the bet for Jason Bolt. He goes to San Francisco with the Bolt brothers to help them win the money to buy their way out of the bet via smart gambling, but that’s about it. Otherwise, the book alternates between Spock’s time in 1867 and the puzzle solving in the present. It’s actually fairly light on capital-A action, though pleasant enough to maintain a decent level of interest.

Hambly packed Ishmael not so much with extra meat as with a meat-type filler not typically employed in fan works of this era: crossovers and cameos. Yes, Ishmael is heavy-laden with pop culture references, some of which I caught on my own (Doctor Who, Star Wars, Battlestar Galactica, Bonanza) and some I didn’t (some more obscure novels and sci-fi works, as well as some less notable Westerns like Have Gun, Will Travel). Doctor Who especially gets a lot of love, coming up no fewer than four times throughout the book. The quantity of nods causes the book to take a light hit in professionalism compared to previous installments, but it’s hard to deny that they’re fun (when you get them). It also helps that they’ve aged into a bit of quaintness; they don’t seem so jarring in an age where things like Ready Player One exist.

Without the high-concept crossover plot, Ishmael would likely be one of the less memorable Star Trek novels—not a bad one, but it’s hard not to argue that it gets a pretty substantial boost in the annals of memory on account of being “the one with all the references”. It also works to think of it as a nice throwback to the way the original series would do a lot of period episodes because they wanted to recycle the sets. Since the books aren’t constrained by budgets or the limits of special effects, it seems like there wouldn’t be much incentive or point in moving backwards technologically and/or imaginatively, so it’s nice to see that some authors continue to find value in stories set in the past (Earth’s or otherwise).

Ishmael is a passable adventure that probably wouldn’t drum up much hubbub if it wasn’t for its tie-ins to other pieces of pop culture. Although the references and cameos are deployed subtly, they nevertheless prefigure the likes of e.g. Family Guy, where that sort of thing is done more for its own sake. And in any event, I’ll take that flavor of fanservice any day over the type that comes next…