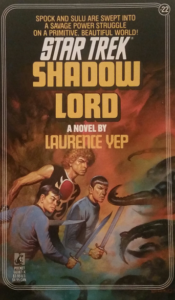 Occasionally, it happens that someone who is otherwise a perfectly decent and talented writer just can’t nail down that Star Trek vibe. We’ve seen it before. For someone who only wrote one Star Trek novel, Laurence Yep has exceptional pedigree: he’s won a Newbery Medal and the Laura Ingalls Wilder Medal, among other accolades, and he’s written a ton of highly praised books and series for children that are steeped in Chinese lore. But that doesn’t necessarily guarantee adequate characterizations and interesting stories in other universes.

Prince Vikram, ninth in line for the throne of his home planet Angira, is returning from a few years spent on Earth, and he’s bringing back modern ideas that he hopes can help pull his people out of their backwater barbarism. While on the Enterprise, he finds himself getting along especially well with Spock and Sulu, scintillated by the former’s intelligent conversation and impressed with the latter’s fencing skills. Kirk seizes on their respective rapports and chooses the two of them to remain with Vikram for a formal ceremony on Angira while the Enterprise delivers some medical supplies somewhere else. Spock takes a harsh dump all over Sulu, being like, “All due respect, Jim, but isn’t Sulu a bit of a junior officer for a mission like this?” To be fair, he’s probably right, since Sulu ends up committing a fairly major Prime Directive violation in the heat of the moment, but still, nobody likes a jerk.

Vikram is the titular “Shadow Lord”, a grave insult that means he’s of such “insubstantial character” as to be beneath all notice. No one back home seems to take too high an opinion of his gallavanting on Earth or his ideas, even his old swordmaster Lord Bhima, a man described no fewer than three times as an oak tree. Naturally, things go south the minute the Enterprise leaves communicator range. Vikram’s old rival Rahu and his followers siege the castle and murder the king and all eight of Vikram’s brothers, putting Vikram on the fast track to the throne and sending him spiraling into a weird aloof headspace where he would rather just stick his head in the sand and let someone else take over the whole mess.

Spock, Sulu, Vikram, and Vikram’s valet Bibil battle their way to a secret passage, then fumble their way through a series of underground tunnels, where Bibil dies while fighting off giant man-eating beetles. The remaining folks, plus a longtime friend of Vikram’s named Urmi who had conveniently stopped by the palace to do some spying and maybe also some stabbing if the situation called for it, have to disguise themselves as penitent monks and traverse the badlands in hopes of reaching Kotah, where maybe they can find someone who can verify Vikram, give him the little blue check mark, and maybe just maybe help sort out this chaos.

Since it’s already come up, let’s get it out of the way early: the biggest problem with this book is the characterization of Spock. This is the worst he’s been since the Marshak/Culbreath days. Spock alternates between being testy, condescending, and completely done with humans and their emotional/illogical BS. Clearly, somebody woke up on the wrong side of the attunement flame. But the crazy thing is, Laurence Yep sounds like exactly the kind of guy for whom portraying Spock should be a total layup. Straight from Wikipedia, any grammar gaffes and weak sentence construction sic:

Growing up, he often felt torn between U.S. and Chinese culture, and expressed this in many of his books. A great deal of his work involves characters feeling alienated or not fitting into their surroundings and environment, something Yep has struggled with since childhood. Most of his life, he has had the feeling of being out of place, whether because he is the non athlete in his athletic family or because he is Chinese and once lived in Chinatown but does not speak the language. As it says in his autobiography, “I was too American to fit into Chinatown, and too Chinese to fit in anywhere else.”

If anyone could have given Spock a sympathetic touch, it should have been Yep. But instead, he writes Spock as an insufferable know-it-all who’s always correcting people and angrily taking them down a peg. Mercifully, Spock falls by the wayside about halfway through the book when he gets injured, leaving Sulu as our only lifeline to anything even remotely Trek-related as he tags along with Vikram and his childhood friend/peasant/palace spy Urmi as they try, rather unsuccessfully, to prevent full-scale war from breaking out.

There’s really not much else to say, honestly, because almost nothing interesting happens in this book. Vikram flagellates himself with angst; a war breaks out; Sulu breaks the Prime Directive by getting directly involved in the war and picking a side, causing him to wring his hands about his career prospects; Spock gets him off the hook at the end by massaging the truth. At the same time, however, it’s a super-quick read. This is one of the earliest Star Trek books to have a low page count combined with a comparatively large-point font. I got through about 90 percent of it in one night, and I wasn’t really even trying.

The film critic Gene Siskel was known to have a litmus test for movies, namely: is the movie more interesting than a documentary of its cast having lunch together? I propose a test inspired by that one: is the book more interesting than the unwritten B-plot? In this case, I think I would genuinely have rather read about medical supplies being delivered to Beta Carinae. Some conflict could break up what should be a routine supply run; you could focus on the rest of the cast and have Spock and Sulu be absent because they’ve been dropped off on Angira. But I’m just grasping at hypotheticals now. Most Star Trek novels, even the ones that cheese you off, usually give you something to remember them by. Shadow Lord, unfortunately, is as ephemeral as its eponymous nickname implies.

Shadow Lord possesses barely a single redeeming quality to recommend it whatsoever, other than that, given the option, it chooses the marginally better path of boring rather than infuriating the reader. Yep makes an absolute hash of Spock, though Sulu is enough of a blank slate to escape relatively unscathed. I’d say this is the worst Star Trek book since Mutiny on the Enterprise, although I hesitate to come down too hard on Yep, who seems like a talented guy who was just so obviously out of his depth that going too hard in the paint against him just feels mean.