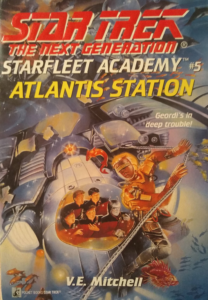 This week, Geordi may be on a field trip to an active volcano, but his peers sure don’t have the warmth they used to. That’ll change soon enough, however, when they suddenly need him to do the entire group project. What’s with the Starfleet Academy books and flooding? Is there anything more soul-withering than a Vulcan scowl? And what good cadet doesn’t know all the legal two-letter Scrabble words? All this and more in Atlantis Station, the book that’s a race to the bottom, and I don’t mean the ocean.

Geordi is running late from Intro to Planetary Exploration for a shuttle trip, but his friends will understand, right? Not this time. Gone are the soft-spoken Altos, the deferential but by no means submissive T’Lara, and the spunky Jenna Pico of his last adventure. The group still has an Andorian and a Vulcan, but this time they’re a couple of haughty, hostile snobs named Ven and T’Varien. They take it upon themselves to deny Geordi his turn at the helm in order to punish him for his tardiness. They seem fun! Rounding out the group are Yoshi Nakamura, a student from a traditionalist Japanese colony world who speaks cringey broken English; Amril and Amray Stenarios, two of six identical clones who do that weird finishing each other’s sentences thing; and Lissa Jordan and Todd Devereau, a couple of mediocre humans, the latter of whom fancies himself Kirk-grade captain material.

The cadets travel to Isla del Fuego, an island formed by a volcano in the Atlantic Ocean some 200 years prior, which has chalked up ten major eruptions in the centuries since. Ven and T’Varien waste no time going full Karen, but their guide, Leilani Kamehameha,1Yes, I had a brief private chuckle about it, and I moved on. despite her youth, proves a seasoned pro at deflecting entitled brats. After a brief tour, they move indoors to begin individual and group reports on the volcano’s activity, at which point the book takes several opportunities to lean into a concept I’m surprised hasn’t come up in these books yet, given when they were published: edutainment.

Those who, like myself, claim 90s-kid status may well recall the mandates issued by the government in those days, which stated, more or less, that it kids were going to rot their brains with hours-long blocks of Saturday morning and after-school cartoons, then by golly they ought to at least Learn Something while they did it. Naturally, that mentality extended to other media as well, including video games and books. Sometimes the educational components were successfully woven seamlessly into new and existing properties; other times, it came across a little heavy-handed. I’d say Atlantis Station falls somewhere between the two outcomes. But of course, Star Trek typically also means big, ripping action and adventure, and so it must eventually supply that as well.

Geordi suspects the volcano is about to blow its stack, but can’t pinpoint why. Like everything else he does, this conclusion draws derision from Ven and T’Varien, but as you can probably guess, he’s proven right when the volcano does exactly that. The underwater station takes massive damage and begins collapsing and flooding, at which point Geordi’s True Leadership stat boosts kick in and he chains together a series of heroic feats and snatches his group of dead-weight worrywarts and whiners from Death’s swinging scythe.

To be honest, I’m a little torn on this one. Ven and T’Varien are just relentlessly mean, to the point that I was genuinely surprised by what an emotional beatdown this book was. Leilani and the Stenarios twins offer mild reassurances, but it’s not nearly enough to counterbalance the Andorian and Vulcan’s raw rudeness. That said, I can appreciate the decision to not sugarcoat bullying or turn a blind eye to the real magnitude of it. What it comes down to for me is the satisfaction of the redemption arc. Didactic kids’ fare generally dictates that characters with fundamentally flawed behaviors and beliefs see their folly and come around, and though Ven and T’Varien do exactly that, it wasn’t quite as satisfying as Jack Pettey’s turnaround in Capture the Flag.

Another factor I suspect plays a role is that two different authors wrote these books. The Worf trilogy was cromulent enough, but one thing it had going for it was a steady voice. Across three books, Worf behaved consistently. But these first two Geordi books have different authors, and so when you read two accounts of a given cadet’s freshman year that take off in such wildly opposite directions, the result is jarring, and in this case even somewhat depressing. In Capture the Flag, Geordi was a bit unsure of himself, about a quart low on self-esteem, but he had loyal friends who believed in him, trusted his leadership, and tried to get him to not worry so much. Watching Geordi get constantly needled by uppity know-it-alls isn’t necessarily an unwanted prospect, but coming hot off a story where he had such strong emotional support, it is a singularly unpleasant one.

Combine that with a probably accidental but still unfortunate repeated scenario—another flood, huh?—and Atlantis Station lands barely on the side of not cutting it. It’s definitely got some strong qualities, but it’s hard not to walk away feeling a little psychically pummeled, all things considered. There’s no denying Starfleet Academy is a rigorous institution, but in this case the rewards don’t seem quite commensurate with the labor, whatever kind it might be.

I do not recommend Atlantis Station. While it approaches learning about science in a fun and unforced way, it’s hurt by the fact that it has way too many characters that are either mean, useless, or not opposite enough of either of those two qualities to make a difference. There are also certain unintentional, perhaps unavoidable, but nevertheless present problems, like a too-familiar climax and a view of Geordi’s freshman year that’s jarring and unpleasant compared to a concurrent and more positive one. A person who’s really into rocks and/or volcanoes might enjoy it, at least in parts. Otherwise, it’s one that can be skipped.

NEXT TIME: There’s future people in that Crossroad Nebula