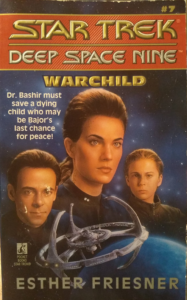 This week, when a plague sweeps through Bajoran resettlement camps, Sisko is hesitant to send in his first-stringers. But when a prophecy from Kai Opaka about a healer girl unifying the world makes its way to him, he tasks Dax with finding a straw of hay in a stack of needles. What does Ferengi poetry sound like? How do Bajorans interpret Cinderella? And how many views are Odo’s makeup tutorials getting? All this and more in Warchild, the book where Bashir gets all the donuts he can eat.

A Bajoran monk appeals to Sisko for medicine and manpower to fight a plague that’s dropping refugees left and right. At first, Sisko is only willing to spare a few of Bashir’s assistants, not the man himself. Soon after, a vedek accompanying the monk delivers a message Kai Opaka left prior to her disappearance, which speaks of a girl whose healing talents will unite all of Bajor. Another political faction, the Dessin-ka, believes the prophesied child will unite Bajor by the sword and will seek her out for their own likely nefarious ends. Sisko ends up dispatching Bashir and Dax to the planet—the former to render medical aid (natch), the latter to locate the girl.

Bashir quickly scores some goodwill points by easily healing his conscripted teenage aide Belem’s club foot, giving Bashir the confidence to argue that the children need more individual care and attention. Most of them agree, but fear that Belem will do what most healthy kids do now that he’s all better: run off and join a resistance splinter group. Belem does exactly that, but Bashir remains undaunted, working himself like a pack mule until he literally passes out. Upon waking, he meets Dejana, a girl who seems to have fought off the fever with her own natural defenses, and her brother Cedra, who takes his self-appointed duty as her caretaker very seriously.

With Dejana comfortably fitting the parameters of the prophecy, Sisko wants the operation wrapped up lickety-split. But Bashir feels he has too much still left to do, and with the help of some lovely parting gifts from Cedra, he pretends not to hear the order to return and goes off the grid. Meanwhile, Dax’s uncharacteristically loose lips nearly get Dejana captured by the Dessin-ka, and it’s only some quick thinking and fancy footwork by Cedra that gets them out of a jam and onto DS9. Once the action moves to the station, the struggle becomes one of keeping Dejana out of greedy hands while trying to locate Bashir, the only person who can reverse Dejana’s declining health prospects.

Warchild is the first of only a couple Trek tie-ins by Esther Friesner, some of whose other notable works and achievements include winning the Nebula for best short story two years running (for “Death and the Librarian” in 1995 and “A Birthday” in ’96), a fantasy trilogy called Majyk, and one curiosity I found mildly amusing: the novelization of Men in Black II. Warchild is not without its strengths; for example, Friesner has a smooth facility with proverbs and adages, cranking out pithy lines like “You cannot smash the same cup twice” and “The loudest petitioners of the Prophets ask for what they desire most but know least” practically in her sleep and maximizing that particular Bajoran monk vibe. She also supplies multiple characters with decent motive for wanting the girl, enough to keep you guessing for at least a little while, unlike the worst of the whodunits that put a neon sign over one sore thumb.

But even though it isn’t any shorter or longer than your average numbered installment, Warchild feels nearly interminable. Personally, I’d chalk this up mostly to the fact that the novel feels a bit Frankensteined together from various ideas, none of which, aside from Bashir’s frontier gallivanting, are up to filling a whole mass market paperback on their own. Finding Dejana only takes up about half the story; after that, a handful of C- and D-plots, like Cedra getting up to some mischief with Jake and Nog, a Ferengi kidnapping Dejana and clandestinely distributing invitations to bid on her, and a too-little-too-late romantic interest for Bashir help it limp across the finish line. Julian’s arc probably could have supported a whole book, but I do appreciate the effort to make it more of an ensemble piece.

Even the various back-half threads contribute meaningfully to the overall picture; I don’t mean to imply that they don’t. But Warchild has kind of the narrative equivalent of a drifting retina, steadily wandering until some syringe to the chest snaps it back into focus. It does put Bashir’s early-series thirst for practicing frontier medicine to the test rather nicely, and Friesner’s talent for capturing the flavor of Bajoran religion is evident, but it would be a little too dishonest to say I wasn’t ready to be done with this one by the time I made it to the last page.

I do not recommend Warchild. It isn’t terrible, and in fact does a number of things quite well, but it’s cobbled together a little too haphazardly from too many weak elements to properly hold together as a fully cohesive story. It may have benefitted more from choosing a stronger point to focus on, like Bashir’s frontier travels, and zeroing in on that rather than trying gamely to include the full ensemble. Again, not too bad, but a little too much jank to truly work.

NEXT TIME: Picard braces himself for some hardcore Gorn in Requiem