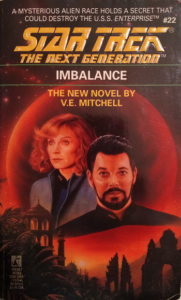 This week, everyone gets antsy when the Jarada get a bee in their bonnet about exchanging ambassadors. But when the populace starts buggin’ out, the away team tries to flee, but Dr. Crusher isn’t allowed to clock out until she saves the world. Do insects appreciate the trombone? What kind of couple celebrates their six-month anniversary? Can we go watch the Federation Games instead? All this and more in the admirably massive Imbalance.

Imbalance
Author: V.E. Mitchell
Pages: 280
Published: June 1992
Timeline: Six months after “Data’s Day” (S4E11)1There’s a reason I put it this way. Bear with me.
Prerequisites: None

Remember the episode where Picard got stuck in a Dixon Hill program on the holodeck?2“The Big Goodbye”, season 1, episode 12. If you recall, he went in there to take a load off from memorizing an arcane greeting for contact with a race called the Jarada, which he had to nail perfectly or risk offending them. It’s a surprisingly unusual occurrence for authors to plumb the depths of canon and pluck unseen and/or barely mentioned races from obscurity, but far from an unwelcome one. Here, the insectoid Jarada get their day in the limelight. But does Vicki Mitchell make the most of this opportunity or squander it?

The Jarada have requested contact with the Federation to negotiate an exchange of ambassadors. Considering how lightly they had to walk on eggshells the last time they dealt with the Jarada, no one on the Enterprise is terribly keen on this. But they send a delegation anyway, comprising Picard, Troi, Riker, Dr. Crusher, Worf, and—in a fascinating but ultimately aggravating wrinkle—Keiko O’Brien.

The landing party splits up and takes in the various facets of Jaradan culture. Riker sits in on an impromptu jam session and introduces them to the mellifluous sounds of the trombone. Dr. Crusher takes a ride in a self-driving Google car with their head scientist. Worf thinks he’s stuck attending the stupid crappy ballet, but it ends up being a fighting demonstration, and he even gives a limited lesson in karate. Keiko, much to her ire, is assigned an escort on her bus ride to the north country, where she accompanies a group of schoolchildren on a field trip in a mildly amusing coincidental presaging of her role in Deep Space Nine.

The Jaradans may have a vibrant and healthy culture scene, but a bigger problem threatens to bring it all crashing down: a touch of mental insanity that’s been spreading ever since they colonized the planet they’re on now. Naturally, it reaches critical mass not long after their guests get cozy, and the whole place goes on communications lockdown in short order. The Enterprise manages to get Picard and Troi out safely, but the rest of the team gets stuck navigating endless corridors and climbing trees to survive the crushing wave of violent psychosis. Dr. Crusher’s Google car armors up and takes her to a well-secured mountain enclave, where she’s told she won’t be allowed any outside contact or potty breaks until she discovers the once-in-a-lifetime scientific breakthrough that will cure the widespread mental breakdown. Easy peasy!

Like an insect’s body, Imbalance is a meticulously segmented piece of work. Once the members of the away team go on their respective tours, the action rotates each chapter from Riker to Crusher to Worf to Keiko, with almost no deviation from the pattern, and punctuated intermittently by occasional check-ins with the Enterprise. I don’t know to what extent this was done intentionally, and it doesn’t have any bearing on anything except that I found it amusingly apropos, but it nevertheless makes for a comfortably streamlined read.

In fact, there’s much about Imbalance that’s amusing, mostly worth sensible chuckles but occasionally landing a bigger laugh, and that quality ends up being a real saving grace for the novel. Because a dark cloud looms over this book, one that’s long served as a bone of contention for many Star Trek fans: the Keiko/Miles relationship. Mitchell distributes plentiful ammunition to both sides, and it’s lucky for her that the rest of the book is so breezy during the buildup and tight during the action, or else it would very likely have gotten mown down by its own hail of bullets. There’s a lot more to be said about this aspect of the story, but it’s better suited to one of the later sections that allows for deeper dives on more specific elements. Believe me, we’re not through with this though, not by a long shot.

There’s a lot to like about Imbalance. The characters really get put through the wringer in this one, enough to at least lightly shake one’s faith in the almighty status quo. As I said earlier, laughs both small and hearty abound. I also thought it was admirable, if a touch pointless, how it tried harder than most books of its time to incorporate canon beyond simple callbacks and take a good long look at a species previously only mentioned in passing. But it’s got one massive thorn in its paw, one I don’t think I’ll be able to forget or forgive any time soon.

I give Imbalance 3 out of 5 self-driving armored Google cars. It’s honestly kind of amazing I liked this book as much as I did, given how much the O’Brien obnoxiousness ground my gears. That’s as much a testament to the strength of the novel’s building blocks as anything. Revisiting an obscure species is something I’m surprised doesn’t happen more often, and Mitchell managed to conjure a rich society from relatively whole cloth. Genuine suspense and good humor shore up the book even more. If it hadn’t been for the putrid Miles/Keiko garbage, I’d very likely have been able to appreciate those good qualities even more.

NEXT TIME: The TOS crew gets caught in an Ice Trap