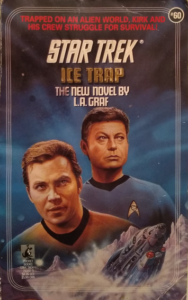 Pharmaceutical station Curie, in orbit around the planet Nordstral, is suffering from a mess of problems. Several of their medical staff have gone completely insane, and they’ve lost a research team down on the frozen wasteland below. So in case you’re keeping score, that’s the second time in four weeks that we’ve visited a snow planet, and our second consecutive book to feature a mysterious outbreak of mental collapse.

Chekov is in charge of the expedition to find the missing researchers, and Uhura tags along with a group of cruelly well-developed redshirts. Meanwhile, Kirk and Bones join Captain Clara Mandeville on an underwater voyage to root out the source of Curie’s mental turmoil and look into some serious planetary polarity issues. This is terribly inconvenient for Bones, because as we learn, he has a severe case of hydrophobia brought on by a brush with death at a family reunion as a wee lad. Despite the fact that we’ve never heard word one about this before now, it is apparently even more debilitating than his dislike of transporters. McCoy’s heretofore unrevealed aversion to water recalls Uhura’s similarly sudden fear of fire in The Three-Minute Universe, and much like in that book, arbitrarily giving a character a man-versus-self conflict adds little to nothing memorable or meaningful to the overall picture.

Ice Trap is the kind of book where if anything short of a major character death can happen, it will. When I think of shit1Those who have read most of this site’s output may have noticed I rarely take advantage of the opportunity afforded by running a truly independent website and not having to answer to any corporate overlords or advertisers to curse with impunity. You can probably count the number of times I’ve done it so far on one hand. The fact is, I made it a goal from the site’s inception to give people a place to visit online where they’re not having to constantly look over their shoulder. I don’t generally have a problem with cursing, but contrary to the popular notion that giving oneself over to it provides a much-needed release, I do believe there’s something about the timbre of it that can also sometimes subconsciously stress a person out. Plus, I feel it weakens an article when done merely for its own sake. You probably didn’t expect to get a treatise on Why There’s Very Little Cursing on Deep Space Spines today, and you almost certainly didn’t want it, but, well, there it is. In this specific case, I went with it because I couldn’t replace it without mocking myself Billy Madison-style. hitting the fan, I think of a singular event that irrevocably turns the tide of a story. But this is one of those instances where hitting the fan happens over and over and over, and characters narrowly escape one harrowing situation after another. Tales of an episodic nature are rarely so stressful, but even equipped with the knowledge that no permanent harm will befall top-billed cast members, Ice Trap manages to seize effectively on a number of common relatable fears.

Earlier, I mentioned some ways Ice Trap resembles other recent installments, but there are even more. It’s the second TOS novel in a row to put Chekov under the microscope. But whereas in The Disinherited he was a doe-eyed young ensign who lived every day wondering which mistake would be the one to get him unceremoniously drummed out of Starfleet, here he’s an older, wiser chief of security whose meticulous preparation is often glibly dismissed as paranoia. I don’t blame him one bit for being irked by this perception; no one would ever dare, e.g., to tell Scotty how to run his engine room. But his skills really come to the fore when he, Uhura, and his team are on the run from Alion, the city-boy village elder who doesn’t talk to the gods the way the good honest country folk do, and has a less-than-rosy opinion of the human presence on Nordstral. Authoritative rugged adventurer is a good look for Chekov, one we don’t get to see very often at all.

Yet another quality shared with a recent book is that this is a collaboration between multiple authors, in this case a group of women writing under the collective pseudonym L.A. Graf, an acronym for Let’s All Get Rich And Famous. We’ll see much more of this team’s work in the months and years to come, but we’ve already seen what one of its members is capable of; Julia Ecklar previously turned in The Kobayashi Maru, one of the most outstanding numbered installments. For Ice Trap, each writer took on a different character—which, as ways to make multiple voices cohere into one go, is pretty clever. I think it works. Even knowing there are multiple people behind the L.A. Graf moniker, I was never able to pick out one voice or style over another. I don’t think that homogeneity implies anything bad about identical writing styles; in fact, I actually sort of prefer it to the reverse, where it’s glaringly obvious when Peter David wrote this part or Michael Jan Friedman wrote that one.

Despite my preference for a smoother blend, however, I can’t say it produced quite as amazing a product as The Disinherited, though the ladies did come very close. Ice Trap is definitely more on the run-and-gun action-oriented side of Trek adventures, with a relatively small amount of philosophizing reserved for the eco-terrorism plot line that eventually overtakes the other threads. But it’s full of great character beats all the same, and even McCoy’s water phobia, pointless as it is, is handled deftly and with reasonable pathos. This one may not exactly be a feast for the mind, but don’t make the mistake of thinking that makes it a carefree romp.

Ice Trap is a good enough book that it would be uncouth to spoil the recipients of this week’s Toast, so instead I’ll simply say this: it’s way worse when they let you get to know the redshirts. I cried like a baby at the end of “Lower Decks”. Yes, redshirts are people too, but it’s way less taxing on my evidently very fragile emotions when they’re faceless nobodies.

I give Ice Trap 3.5 out of 5 modified shuttles. The debut adventure from the L.A. Graf team is full of heart-stopping thrills, with hardly a single chapter that doesn’t end on a note of suspense. It also shows a mature understanding of several beloved bridge officers and their relationships. Ultimately, it’s a little less than the sum of its parts, but it’s still a good time from start to finish and an easy one to recommend.

NEXT TIME: Riker reconnects with his Imzadi