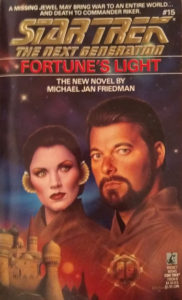 This week, while Riker plays undercover spy, Data plays third base. With the Priority One message not going to him and having to put the Enterprise in park in case Riker gets deep in it, Picard isn’t quite sure what to do with all this free time. How did Riker get into jazz? How would this book be different if Data read the Baseball Prospectus? What did Michael Jan Friedman get right and wrong about the state of baseball in the 21st century? It’s the book that’s handed out for free by the Church of the Center Field Bleachers.

A Priority One message comes in—but it’s for Riker, not Picard. Starfleet wants him to go to Dante Maxima VII, a.k.a. Imprima, to track down his friend Teller Conlon. Riker and Conlon used to hang there in their Academy days, but Conlon stayed and became a liaison for the Federation. He now stands accused of stealing the jewel-encrusted seal that gives the book its title, and Riker, knowing Conlon well and being familiar with the area, is dispatched to go undercover and investigate. Riker hopes to exonerate Conlon, but hasn’t checked in on him in a minute, and is incredulous of reports that his friend has a new-ish side hustle as a petty smuggler.

As Riker goes planetside, he encourages Data to check out a holodeck program he left running. Said program turns out to be a baseball game from the 21st century, a contest between the Fairbanks Icebreakers and the Phoenix Sunsets, in which Data plays the role of Bobo Bogdanovich, the player who, according to the annals of history, recorded the final out and ended the Icebreakers’ playoff run. Although initially confused by the appeal of the game, its strategic component, and his manager’s foul temperament, Data decides to ride it out and see if he’s capable of getting enough of a grasp on the game to alter history.

These are our two stories this week, and never the twain shall meet, except for an off-handed reference to Fortune’s Light during the baseball game that may briefly lead you to believe that Data may apply some of his new baseball knowledge to Riker’s scenario (never happens). Needless to say, I feel like mileage will vary wildly on this one. Perhaps I’m wrong, but I don’t think most people, or at least most Star Trek fans, get excited for both political espionage and baseball. One or the other, perhaps, but likely not both.

Making a full fifty percent of this book about baseball seems to me a rather hefty gamble. Don’t get me wrong: baseball and Star Trek are hardly unusual bedfellows. I actually think there’s more overlap between the two fandoms than may seem apparent at first glance, and I think people who effortlessly understand complex game rules in their own favored pursuits but feign confusion when it comes to sports and distance themselves from it with goofy non-words like “sportsball” are hypocrites. But expecting people who have signed up for sci-fi action to commit fully half their invested time to an historic (fictional) playoff game is an awfully big ask. Conventional wisdom has long held that attending a live game is the optimal way to take in the sport, and that watching it on television pales in comparison. Well, if you’re already uninterested in watching it, imagine reading about it. Thankfully, I like baseball enough that the plot held my interest, but I’d be totally sympathetic to anyone who opted out of this book knowing they were in for a lot of it.

And it’s quite a good thing I like baseball as much as I do, because without it I’d probably have found this book an interminable slog. I speculate that I may be in the minority among people likely to read this book, but procedurals and political thrillers are not really my jam (though I suppose I’d better start acquiring a taste for them by the time we reach late-era DS9 and Section 31). But the truth is, the Riker half just did not grip me all that much. His partnership with Lyneea Tal, a retainer of one of the madraggi,1A curiously under-explained term for the obscenely wealthy people who rule Imprima and maintain their rule by making innovative strides in the field of acquiring more wealth. Riker makes a few snide comments about it that mirror my feelings about them, but everyone on Imprima considers it perfectly normal and is super chill about it. They’re all shocked and appalled when the villain turns out to be in cahoots with the Ferengi—or perhaps more accurately, a Ferengi—but really, it’s a wonder they all aren’t. develops naturally and nicely, and I liked the way she slowly came around on him. But the Teller Conlon stuff left me cold. We get to know him a little bit through flashbacks, but it’s really hard to drum up sympathy for these original characters the instant they’re foisted on you.

No matter what kind of reader you are, Fortune’s Light is bound to have something that’s not for you. But it’s not bad, especially compared to Friedman’s previous output to this point. Even if baseball bores you, it can be fun to watch Data try to wrap his mind around new concepts, and obviously if you like Riker, it delivers. It’s decent, if not terribly memorable. But the average quality of these books is starting to rise, and “not terribly memorable” is bound to get a book left in the dust a lot faster nowadays.

I give Fortune’s Light 2.5 out of 5 game-winning home runs. Your mileage will vary greatly on this one depending on how much you like or dislike political espionage and/or baseball; a median rating seems appropriate. Clearly, given how much time and research I devoted to the latter, you can tell which way my brain went.3I literally wrote all the baseball stuff first. Still, despite inconsequential holodeck shenanigans and a boilerplate espionage plot, I found it a little more engaging than the rest of Friedman’s books thus far. I still don’t find his stuff as good as his reputation would suggest, but it’s slowly getting there.

NEXT TIME: Kirk is banished to the phantom zone in Ghost-Walker