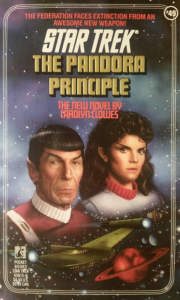 This week, our favorite Romuvulcan (Vulcomulan?) gets a turn in the spotlight, which, unfortunately, she has to share with an extremely irritating CGI mascot. Spock rescues her from a literal kid-eat-kid existence on the aptly named Hellguard, but when a set of complimentary gift boxes proves deadly, they’ll have to sneak back into Romulan territory and work together to bring down the Amazon warehouse that’s shipping out the faulty orders. Who will save the day? The stoic Vulcan and his volatile protégé? The captain trapped in the doomsday bunker? Or the infuriating tiny ocean man? Place your bets! It’s the book that, sadly, never gets around to taking you out to the ballgame.

The Pandora Principle is, at least on the surface, about Spock and Saavik. A team of Vulcans, among them Spock and Sarek, clandestinely take a shuttle across the Romulan Neutral Zone to save whatever survivors of the Romulans’ horrific experiments on Vulcans may still remain on Hellguard, a brutal desert planet on the edge of Romulan space. While studying some phenomena away from the camp, Spock is attacked by a boy, but is saved by a feral teenage girl who turns out to be Saavik. Saavik later shows up at the last minute to board the departing shuttle.

At Spock’s urging (a reminder that the Federation would agree with him notwithstanding), the group reluctantly agrees to attempt a full reintegration of the survivors back into Vulcan society. Of the survivors, Saavik proves the wildest and least manageable, so Spock cashes in a year of comp time to see to her instruction personally, essentially My Fair Lady-ing her into enough of a state where she can attend Starfleet Academy without flinging feces everywhere.

Fast-forward to the present, and Saavik is visiting Spock aboard the Enterprise while it’s docked at Earth. During her stay, a derelict Romulan Bird of Prey carrying a dead crew drifts across the Neutral Zone border. The ship is found to harbor a cloaking device which can run indefinitely even in warp drive, and also allows the ship to fire weapons while cloaked. This seems like it should be a pretty freakin’ major deal, but the book tables that idea and never gets back around to it. No, it’s the boxes with the pretty lights that end up being the real danger. Spock, mesmerized by the pretty boxes, sends one of them to the exosciences department at Federation HQ for further study. Scanning the box causes it to break open and unleash a contaminant that consumes so much oxygen, it leaves less of it behind than is found in the vacuum of space.

Just one of these boxes by itself could take out an entire planet’s population, but Saavik recognizes them and says there are thousands of them just sitting around in a cave on Hellguard. With Kirk out of the picture by his own hand (more on that below), Spock has to lead another secret voyage across the Romulan Neutral Zone border to destroy the boxes before the two-day Prime shipping deadline. And along the way, maybe they’ll also get some help from some rogue Romulans who think these boxes aren’t such a hot idea.

Although Carolyn Clowes finished writing The Pandora Principle rather quickly, it then languished in editorial purgatory. Clowes was electrified by the idea of Hellguard and set to work almost immediately upon reading Vonda McIntyre’s novelization of The Search for Spock, but the book went through an interminable revision process that delayed its publication for nearly five years. Five years might not seem like a long time in the cosmic scheme, but in the world of Star Trek novels, it’s like night and day, particularly the stretch from 1985 to 1990, during which certain things that were in vogue at the beginning of that span, like focusing heavily on new original characters, gradually became editorial shibboleths. Original characters, like, for instance, Obo.

We need very badly to talk about Obo.

Obo is a Belandrid, from the ocean planet Belandros, and has filaments on his fingers that somehow allow him to fix any circuitry no matter how busted or inflexible (it’s vague enough to be tantamount to magic). He is not an official officer at spacedock—more of an unauthorized mascot that they keep around because of one very useful talent. Responsibility for Obo falls almost entirely on a young lieutenant named Robert Harper. Harper sees to Obo’s care simply because he believes no one else would. That is in fact an astute judgment, because anyone else would bash Obo’s skull in after being around him for five minutes.

The whole Obo business is embarrassingly clownish. We are talking, like, Voyager-level shenanigans here. Obo is the kind of creature that would have showed up in full CGI in a late-90s family sci-fi movie and been savaged in one or two sentences by every critic who wrote a 1½-star review of it. He constantly shows up in places he’s not allowed to be in and has a tendency to blab secrets, which makes one wonder why no one has learned to not say anything sensitive in his presence. It drove me up a wall watching characters like Spock and Scotty display boundless forbearance for this gibbering goofball that they should be recoiling from like an infected toenail.

Obo is far from the only silly thing in The Pandora Principle. Some of those silly things are bad, such as the pidgin Saavik speaks at the time that Spock rescues her, which mercifully does not last very long. Some of them are good, like Saavik turning out to be a natural at baseball. I wish the book had been able to devote at least a little bit of time and/or space to exploring her pitching talent in an actual game setting. Good or bad, however, that silliness often threatens to overwhelm the book, on occasion making good on that threat.

When The Pandora Principle focuses on Spock and Saavik getting to know each other, it’s really good, and that dynamic is very skillfully rendered by Clowes. But this is a book that seems hellbent on undermining itself at every turn with an endless procession of boneheaded character decisions. If you’re interested in Spock and Saavik and their mentor/protégé relationship, you’ll find a lot of good meat to chew on here. But just be warned: you’re also going to have to wade through a lot of garbage.

This week, we are pouring one out for a civilian couple, El-Idorn Rakir and Janet Goldman, the exoscientists who accidentally release the oxygen-consuming contaminant when they scan the pretty box. These two lovebirds love smooching. At first it seems unprofessional how handsy they are, but overall they end up being kind of sweet. I’m giving them the Toast because for one thing, of the characters that die in this book, they are among the few who remain permanently dead. But also, it’s just a bummer to see two characters that love each other so much die with regret over not taking what turned out to be their last opportunity for a kiss. All you couples and lovers out there: if you’ve got a chance for a quick smooch or an on-the-job make-out sesh, you take it, because you never know when it could be your last one!

I give The Pandora Principle 2 out of 5 oxygen-eating pretty boxes. It would likely have gotten a significantly higher score had it had the discipline to focus primarily on Spock and Saavik, but it regularly trips over its own feet with its self-sabotaging weakness for unchecked silliness. That’s a real shame, because the Spock/Saavik stuff is for the most part really well done. With some tighter focus, this could have been a great book. What’s even worse is that somehow, five years in editorial limbo didn’t manage that to any appreciable degree. It’s better than most books in its scoring range; it’s just dragged down by some relentlessly stupid baggage.

NEXT TIME: Picard and Troi fall in with some of Gulliver’s Fugitives