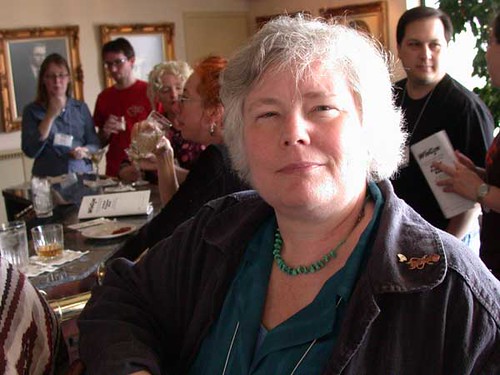 Vonda Neel McIntyre, Hugo- and Nebula-winning science fiction author, died of metastatic pancreatic cancer on April 1, 2019, just shy of only two months after a diagnosis thereof. She was 70.

Relevant to the purview of this website, she authored five Star Trek novels from 1981 to 1986—one numbered novel, three film adaptations, and one event novel. The Entropy Effect made headlines (and waves) prior to publication for killing Kirk. It would later become one of four novels re-released in 2006 to celebrate the franchise’s 40th anniversary. The book is also notable for containing the first occurrence of Sulu’s first name, Hikaru—one of the very few elements originating in a Star Trek novel to eventually ascend to canon. Her film adaptations expanded substantially on their original source material; The Search for Spock, incredibly, consists entirely of expanded lore all the way up to the 80-page mark. Gene Roddenberry himself endorsed her work and provided blurbs for a couple of her books, including a particularly effusive one for Enterprise: The First Adventure.

Other major works of note include Dreamsnake, the novel for which she won the Hugo, the Locus, and the Nebula (her second of three); Starfarers, an original quadrilogy; and a single Star Wars novel, The Crystal Star, which is generally not quite as well-received as her Star Trek work. She also founded the Clarion West writing workshop, and advocated for the use of the singular “they” in science fiction as early as 1973.

Search her name on Twitter today and you will find myriad people gushing about how much she changed their perception of the Star Trek universe with her work. Star Trek novels, even the good ones, have a tendency to display roughly the same level of imagination the budgets of the TV shows allow for, and McIntyre was one of the few that sought to aim beyond that and use the medium to create something truly mind-bending. She was a masterful science fiction author and a pantheon-level Star Trek writer, and she will be greatly missed.